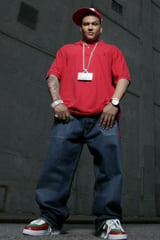 Cuban Link has few concerns today. At Hotel Paradisus on Coco Beach in Puerto Rico, the simple things take precedent. Cuban and M.O.B. (Men Of Business) owners Artie Pabon and Mickey Rosenberg Toro have gathered over 50 journalists for a weekend of business sprinkled with pleasure, or vice versa, including an exclusive listening session and private performance with special guests Mya and Syleena Johnson. Other highlights from Cu‘s February 2005 release, Chain Reaction are “Talk About It” with Jadakiss and the

Game-assisted “No Mercy.” Sitting one-on-one with Cuban Link in his ocean-view suite, it’s clear he has no hate in his blood, just money on the mind.

You were born in Cuba. Tell me about your heritage.

I came to the United States in 1980 when I was five-years-old. I came in a banana boat to Miami. The Scarface story. That’s actual footage from The Mariel. It left Havana harbor to the Florida Keys. We landed there. It was a concentration camp on 95 North where they had all of the Cubans. 125,000 of us. That’s how I came here. Fidel [Castro] made a treaty with [President Jimmy] Carter. Fidel stiffed ’em because he put all the criminals in there. There were 100,000 regular people from Cuba that wanted to leave and then he opened the jails and sent all of the resistance to Florida. I lived in Florida for six months. Then I moved down to Puerto Rico for three years. From there I went straight to the Bronx. That’s where it began. I was like i11 when I started speaking. From there it was a rap. Hanging out on the streets, cutting class, being bad. I wasn’t such a bad kid. B student. Through streets, through friends, I learned the hip-hop culture, fell in love with it, represented it, live it to this day as a rapper.

How did you meet Big Pun and Triple Seis?

Seis introduced me to Pun. I was 19. He came to my window with this big dude one day, throwing rocks at my window like, ‘yo, come down. Let’s play some ball.’ I met Moon Dog, that’s what Pun was called at the time. We ran like five full courts. Pun wasn’t that big at that time. He was like 250. He took me to the house. He kidnapped me for like a week. That’s where it all started. Real friendship. Seis was always the advanced one. He was the one who took it serious. Seis was in a group called Young & Ruthless, so me and Pun made a lil’ name up called Ruff & Rugged. After that, Young & Ruthless didn’t work out so we picked Seis up. We became Full-A-Clips. That’s when we took it

serious because there was a guy backing us up that believed in us, Uncle B. We always had love for Fat Joe because he came from the same neighborhood. He was the dude that made it out of the neighborhood. We respected him. I knew the whole street side of TS from playing baseball, chillin’ on the corner. Uncle B knew Fat Joe. So that connection came through there. Fat Joe heard us and liked us. He loved Pun. He decided to take Pun under his wing and put him out. In ’95, Joe came out with Jealous Ones Envy and Pun was featured on “Watch Out.” Joe took him under his wing. After that, it was a rap. Everybody fell in love with Pun. Besides being a friend, Pun was a great businessman. He said, ‘don’t worry about it. Ya’ll with me.’ He took us under his arm.

What did you learn from Pun?

I learned that there’s a time to play and a time to do business. Respect is a big thing, and family values. Regardless of what you might have heard and seen, he was a family man. He loved his family deep in his heart.

What went wrong with Terror Squad?

I think selfishness for each individual. And greed. Greed for money. Greed for the spotlight. That’s under one man, obviously the only one who’s shining is one man. So you know who I’m talking about. Besides that, I don’t wish no hate on no one. What’s personal is personal. What’s business is business. And I’m glad I’m in this business opportunity over here with M.O.B. and not over there anymore.

What have you learned about friends and enemies in this business?

There are no friends at the end of the day. In my eye you have to prove you’re my friend, for real. Naturally. In many ways. In this industry, it’s easy for people to say they’re your friends, at the end of the day if a guy has a gun to your head, a real friend will actually do something. Whether it’s call the cops or beat the shit out of the guy who got the gun and take the gun from him. Try to save your life. Not the ones that run away. That’s my definition of friend cause I’ve done that for my friends, so I expect that. I’m saying it to the extreme. You got acquaintances and business partners, except certain key peoples that you keep because you know they’re

your friends. But there ain’t too many. Believe me, I know about betrayal. And I still got the audacity to say what I said. There’s still hope. I had to change my whole thing around. Remember, a 10-year relationship. Sleeping in my house, playing with my family. Then because one person is not your friend, everyone’s not your friend. I had to take that route. It’s all good. I’m a survivor. God put me here for a purpose.