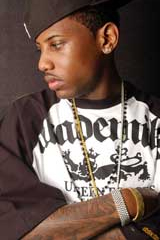 Fabolous is one of the calmest dudes you might ever meet. It may be because he hit the sheets at 5AM the night before, or maybe because he’s not, as he states, on no star shit. “I don’t walk in the room and demand all the attention,” F-A-B-O assures. “I’m cool and laid-back. I’m just a regular guy.”

Not so regular. Ghetto Fabolous and Street Dreams were both certified Platinum and his third CD, a major label released mixtape featured the hit “Make U Mine” featuring Mike Shorey, the first artist Fab signed to his own Street Family Entertainment label. He reps Reebok, Nextel, Sean John and Pepsi and is featured in NBA Live 2003. He sports matching white and yellow gold and diamond jewelry: earrings, bracelet and hanging pendant with Jesus’ head. No, this is no regular guy. Spend a lil’ time with Desert Storm’s Super MC.

Talk about your new album.

It’s a very different album from the last two albums. You’re going to see a lot of my growth and versatility on this album. It caters to a lot of ears. It goes everywhere: down South, West Coast, and keeps my East Coast vibe. It’s just hot music in general. I titled it Real Talk because I felt like that was what I was giving the audience, listeners and fans. What I’ve been through, where I’ve been, people I’ve seen and met, experiences I’ve gone through, all those situations. The albums about making good music and being able to put it in a format that’s relatable to the people.

What producers did you work with?

Just Blaze, the Neptunes, Rick Rock, Scott Storch, who recently did the “Lean Back” record. Also, we got some producers who didn’t have the big name but they came with the fire joint, the hot joint. It wasn’t just about having a big name. It was about coming with the dope beat.

A while back, you were having a lot of run-ins with the cops.

I just think it was a time with some bad karma. Some things swing back around. The situations actually got resolved very quickly. The charges were dismissed, but of course, that’s not what gets publicized. What sticks in the papers is Fabolous Arrested With Gun.’ That’s what they’re showing to the people. And of course, most of the things were ironed back out. Unfortunately, that doesn’t reach the paper. So what we did was file a complaint and lawsuit against the New York Police Department just to let them know you can’t falsely accuse people and wrongly arrest them and then just let them go and that’s supposed to be it. I think anybody out there whose been in a situation like that, and I’m sure that situation is very relatable to people, you should definitely file a complaint or file a lawsuit to let them know that you’re serious about it and to keep the police from doing stuff like that.

Joe Budden and Game were just going at it. How do you manage to stay out of beef?

Beefs are really just misunderstandings between two artists. I stay out of it because I’m mostly cool with everybody. Even the people I’m not cool with or don’t have a connection or liking to, I just keep myself away from them. I don’t mix in or try to say something about them when I get the people’s ear. I don’t go in magazines with reckless talk. I just do me. I’m not here to feud and go tit for tat with other rappers. I’m here to make good music, make some money. Beef is not one of the things I’m in the game to do. If I wanted to just beef with people I would have stayed in the hood where you can get into plenty of beefs all day. There’s no need for me to bring that element to the game. That’s not what I’m here for.

Your brother Paul Cain is a rapper. Is he also signed to Desert Storm?

Yeah, he has a situation with Desert Storm where they’re just finding out which way they want to attack with him. It’s about having the perfect timing. They’re figuring out everything and developing him as an artist.

Tell me about your other business ventures.

We got a few things in the making. Got a liquor company we’re about to do, clothing line called Rich Young that we’re banking on. I’m reading scripts, looking for the right part. Everything else just comes in as it comes, commercials.

How do you feel about hip-hop in general?

The industry is doing well. People are making a lot of money all over the board. Even other companies are starting to use hip-hop in ways to do things. You see rappers in commercials, movies, clothing lines, sneaker lines. Hip-hop is definitely a big market. It has a huge following and it’s a great way to market another product. I just don’t want the game to get exploited by various companies who are just dipping into hip-hop to get their buyers and the generation that’s associated with hip-hop and they just jump back out of it when they feel need be. Everything’s working good for me. I’ve been blessed. Fortunately, I’ve had the chance to showcase my talent. I think the music on this album is great. It’s going to be one of the albums you remember.