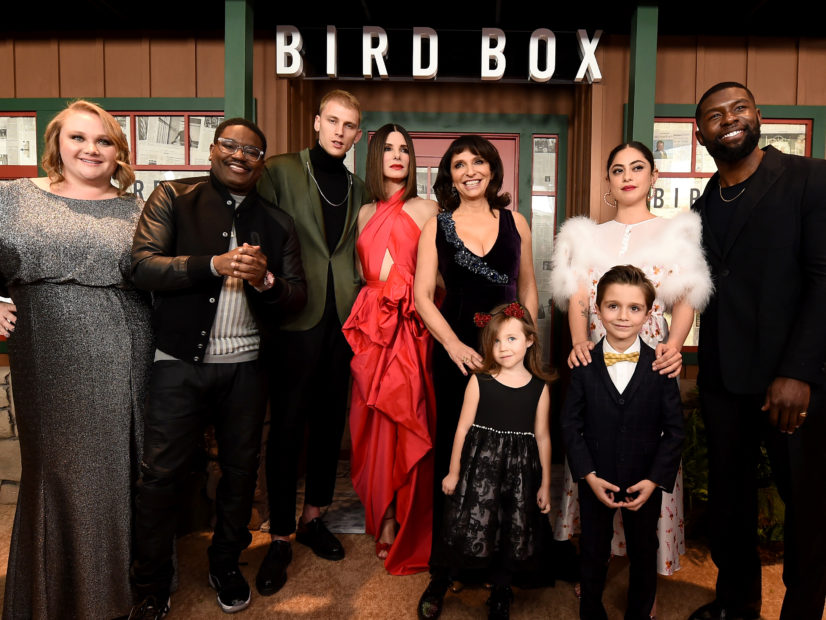 When the New York City premiere of Bird Box descended on the tony Lincoln Center on December 17th, few — if any — in attendance knew that the film would become a social media phenomenon. The film, which is based on the book of the same name by Josh Malerman, has even gone so far as to inspire a social media challenge that can be described as “risky,” at best.

Can’t believe I have to say this, but: PLEASE DO NOT HURT YOURSELVES WITH THIS BIRD BOX CHALLENGE. We don’t know how this started, and we appreciate the love, but Boy and Girl have just one wish for 2019 and it is that you not end up in the hospital due to memes.

But Trevante Rhodes, who plays Tom in the film, isn’t surprised that the film became the hit that it became. “It was a truly whole and rewarding experience,” the Moonlight star tells HipHopDX. “I got to work with Sandy [Bullock, the lead], I got to work with Susanne Bier. I think it’s nothing short of a perfect movie.”

This “perfect film” is based on a book that first went to press in 2014, and was released first in the UK and then the United States. It’s set in a post-apocalyptic time when an “unseen force” drives nearly the entire population to suicide. Bullock’s character is tasked with bringing her children to safety, away from this “unseen threat.”

Much ado has been made about Sandra Bullock’s performance in the film, though Eminem’s nemesis Machine Gun Kelly (who billed himself under his real name, Colson Baker) and Get Out star Lil Rel are also coming in for their fair share of praise as Felix and Charlie, respectively. Kelly’s character, especially, is the source of many a conspiracy theory, since he simply “drove away” and off the screen, never to be seen again, after his sole scene in the film.

#todaysjob Queen #SandraBullock did not come to play with the peasants at the #NYC premiere of #BirdBox. Also in attendance were #lilrel #machinegunkelly and more. Look for my coverage on @hiphopdx very soon! #netflix #horror #screamqueens #mybloggerlife #myphotolife #myjournalism #celebrity #redcarpet

It’s difficult to bring every character, effectively, to screen, and Kelly’s character of Felix is the perfect example of that. However, producer Christopher Morgan says that this is part of the process, and he was more concerned about keeping the integrity of the story intact than he was about seeing some of the characters reach a logical conclusion.

“When I first read the book, I couldn’t put it down,” Morgan admits. “It’s really gripping from the main character’s point of view, and from the point of view that it was a ‘thriller’ of a novel. But more than anything else, it was all about someone facing their fears head-on, and that’s the point I wanted to make with the film.”

That “someone” is none other than A-level Hollywood actress Sandra Bullock, who came to the event looking regal and resplendent in a red dress covered with a puffy red faux-fur shawl. Bullock, whose role as Malorie Hayes is earning her critical acclaim, said that she drew from her own fears as a mother of two adopted black children — son Louis and daughter Laila — in Trump’s America.

“Fear?” Bullock says to DX exclusively. “I go through that every day as a mother. I look at the world around me and I’m terrified — terrified of what’s coming next, terrified of what harm may come to them, terrified of what they could be subjected to when I’m not looking. It was so easy to put myself into this role for that reason. How could you not be afraid, really? Except, the truly terrifying part is, I can’t just put on a blindfold and lead them to safety.”