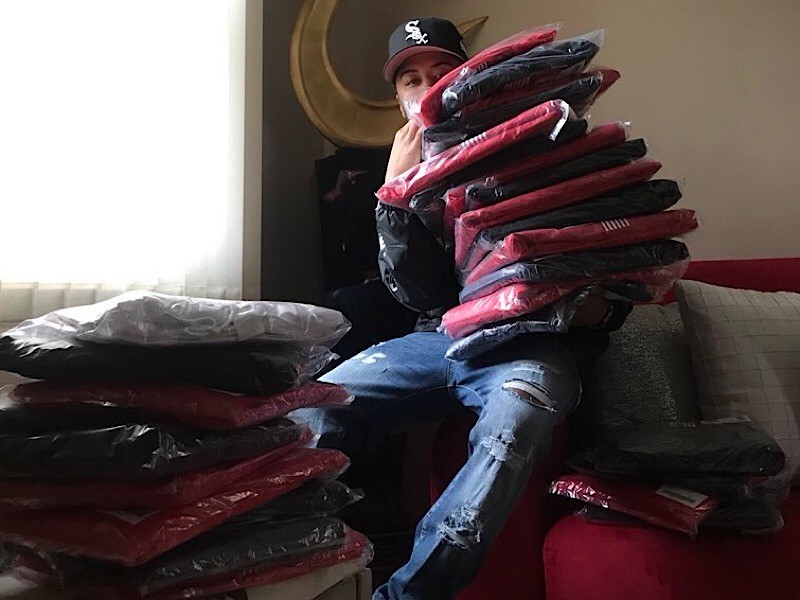 Welcome to the inaugural edition of 10,000 Hours, a different kind of spotlight. Usually associated with psychology writer Malcolm Gladwell, the concept refers to the idea that 10,000 hours of “deliberate practice” are needed to become world-class in any field. In this case, Hip Hop.

While it’s common practice to focus on up-and-coming acts making a buzz, this series will focus on a different breed of artist.

We’re talking artists who exist outside of the traditional label system, handing the bulk of their own day-to-day management, pressing up and selling their own albums, and building their dreams one fan at a time. Aside from sharing their stories, we’ll be distilling some incredible jewels they’ve picked up along the way.

In short, it’s a Hip Hop Ted Talk — in written form — meant to help inspire other artists to change their thinking and strategies to perhaps achieve new levels of success.

This installment, we’ll be talking about merch, which in today’s landscape — where streaming has taken a lot of the value away from music as a commodity — is a must for an indie artist’s marketing strategy.

Our first artist is New Jersey native (and creative) Twondon. He’s been bubbling on the scene since his debut EP Stay Golden — executively produced by Smoke DZA — dropped. Over a million streams and a handful of acclaimed projects later, his music and his team (UpperClass) have been on the move.

One of the most impressive come-ups for the young artist has been his clothing, which he seems incapable of keeping in stock for longer than a few hours.

Currently celebrating the success of his latest EP, Been Dead, he broke down the moment his merch became a financial turning point for HipHopDX — and dropped a few gems on building and understanding his audience.

“What I’ve done in this past year and a half is zoned in on the people that support what I do and started treating them like number one … treating them like royalty,” he says. For him, this has meant driving all around the tri-state area delivering albums and merch, and getting as personal as possible with an audience he’s spent years molding.

He’s now in a position where his music and merch are paying his bills, allowing him to focus on his craft. It’s a lifestyle that requires constant hustle — but also one any up and coming artist should aspire to live.

For Twondon, his breakthrough was the A3C Festival in Atlanta a few years back. “My boy was like ‘what you should do is create some shirts,‘“ he explains.

“I used to do the merchandise heavy … I stopped because it wasn’t selling,” he admits. “I had my homies wearing it, and had a box to just give out to people and stuff like that.”

Twon’s associate convinced him that things were different than they were three years prior (when he first created merch).

“I decided to take a shot … fabricated and brought merch [to A3C] and handed it out for free.” After returning to Jersey with leftovers, he decided to attempt to unload it via social media. “Basically when you got leftover merchandise that’s left over money. I’m not in the business of that.”

Twon and his photographer did a quick shoot with the shirts. That was a Friday. By Sunday, he was out of stock and in need of a re-up.

“It [got me] back into motion,” he says proudly. As learning from his first try/fail, he decided that with a new found interest in his merch he would take a different approach.

“I reinvented my whole my whole way of going about design,” he explains. “When I was doing it before, it was very solid, you know … it was black and white, black and gold. It was very plain. It came up lazy if we’re honest. So I’m like, ‘Yo, you know what, I’d be a fool to make the same mistake twice and give it up the same way and expect different results.’

Available online now at https://t.co/6i4457i6yd! Only on sale until next Friday, so be sure to get yours. Thanks for your love in advance! pic.twitter.com/NxOpPMiHyG

New merch and music out now! Go get both. Mad love in advance. https://t.co/qprBBfdBxC ? pic.twitter.com/WmoPPV0xUA

“That changed the game for me; I think I’ve made more income from that versus the music — and I’ve been taking music seriously for a while.”

The major takeaway was that Twon began to see — and approach — his merch as a lifestyle, and a natural extension of his brand as opposed to old run-of-the-mill logo heavy designs. Giving his gear the same attention to detail as his music is genuinely resonating with his growing fan base.

“I started to try to find inspiration in the fashion world from names like Virgil and Joe Fresh Goods. It’s quality shit,” he says. “I think people appreciate that the kid is giving them quality music along with quality merchandise.