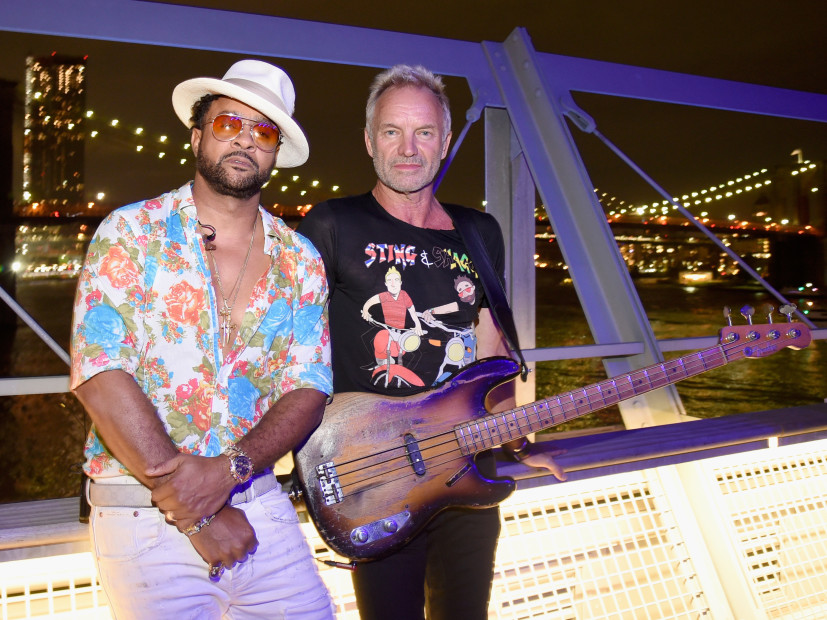 The Sting of the 21st century may be only known for your parents’ romantic music on Adult Contemporary stations like “Fields of Gold” and “Why Should I Cry For You?”

The Shaggy of the 21st century may be forever defined by “Angel” and “It Wasn’t Me.”

And in both cases, it’s a sin and a shame, because each man comes to their new collaboration, 44/876, with decades of legendary music under their respective belts, and a permanent place in the pop culture, Hip Hop, and rock pantheons.

For Gordon Sumner, or Sting as he’s universally known, his time with The Police fueled his interest in, and respect for, American urban and Caribbean music. Even he, however, is aware that this collaboration with “Mr. Boombastic” is nothing if not jarring to the average fan of either musical genre.

“When people first hear the words ‘Sting and Shaggy,’ they certainly have questions,” he said before the duo’s sold-out show at Pier 17 in New York City. “Like, what’s that about? How did that happen? But when they see us performing together, they realize that there’s a lot of common ground that we share.”

The “common ground” is evident to those who know their rock’n’roll history, specifically as it concerns both the Police as a collective and Sting as a solo artist. Prior to The Police “breaking through” on American rock stations in the early 1980s, they borrowed more than a few of their musical stylings from reggae and ska. Those Jamaican sounds were more than evident on such classic deep cuts as “Demolition Man,” “Walking on the Moon,” and “So Lonely.”

And this is to say nothing of the use of the classic Police track, “Every Breath You Take,” by music mogul Diddy for the Biggie dedication joint, “I’ll Be Missing You.”

Given Sting’s love affair with Black music, then, it made sense that the eternal rock star and the reggae legend became “kindred spirits.”

Shaggy, born Orville Burrell, felt that “kindred spiritship” with Sting, as well, and took time to remark that reggae music — the music he loves, the music that made him famous, and the music that made up the soundtrack of his life — is an all-encompassing musical genre that would, naturally, bring these two together.

“Reggae is everything,” he said when asked if reggae was merely a political musical genre. “But, it is certainly revolutionary music. When you listen to the Bob Marleys, the Peter Toshs, there’s definitely that revolutionary type of vibe that comes with the music. But, you know, there’s also great love. The great thing about reggae music is, it’s got that life — it’s got that soul. It’s very relatable to people’s lives.”

This shared love of the musical genre created a natural vibe between these two artists, and the first track, “Don’t Make Me Wait,” was born. Initially, “Don’t Make Me Wait” was to be a one-off track, but the two got along so well — and were so happy with the end result — that they recorded an entire album called 44/876. To date, “Don’t Make Me Wait” has more than 14 million views on YouTube, and debuted at #1 on the Billboard reggae singles chart.

The light-hearted nature of this song, and a few others on the album belie the fact that the duo is very politically active. Both Sting and Shaggy hope that their fans use their music as a lightning rod to take political action in a progressive direction.

“There’s a song on the album called “Dreaming in the USA,” which is, in a quite obvious way, the DREAMers,” Sting said. “There’s this current danger that while they’re working, or living their life, that the authorities will come in and snatch them where they stand, and take them back to where they came from. That’s a terrible anxiety to live under — and you know, we, Shaggy and I, are immigrants. [Shaggy] serves in the United States armed forces, and I believe that gives him the right to speak his mind. And as for me, well, I’ve always been very political — always leaned to the left of center — and I will always speak up for the downtrodden, those who have no voice, and those who need my voice to get their message across.”

Yet, as the duo continue to traverse through the United States to promote their unusual collaboration, they hope, more than anything, that their fans come away from the experience feeling “joy” about the power of music.

“When we go onstage, there are some people who buy into it, and some people who are just confused as fuck,” Shaggy said. “But, by the time we reach the third number, you get it. You feel it. And you’re connected to it.”

Sting and Shaggy are on tour in support of 44/876 now. Check out their tour dates here. For more information about Shaggy’s “Make A Difference” foundation, click here.