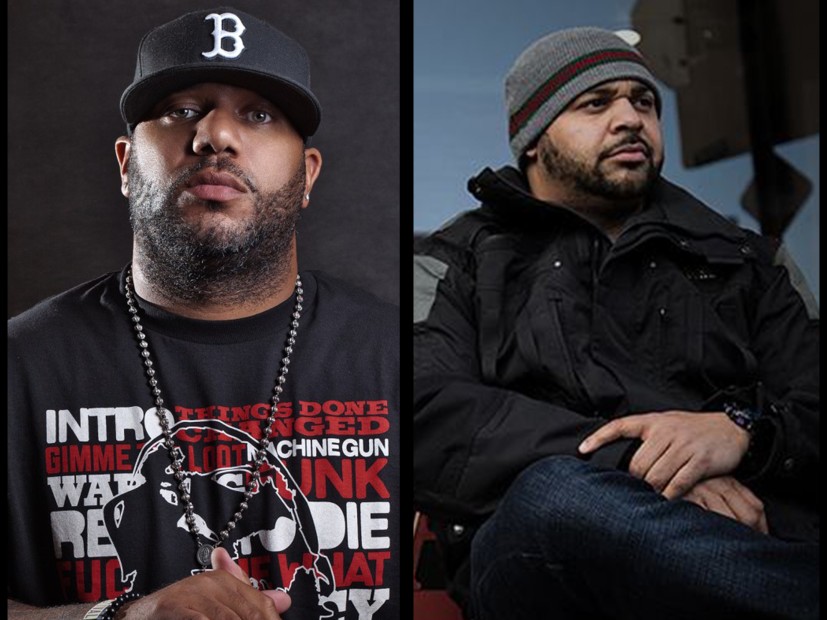 Throughout the course of our nearly hour-long conversation, Apollo Brown and Joell Ortiz were happy to trade playful barbs with one another, as friends like these usually do.

Brown frequently, and jokingly, referred to the former Slaughterhouse MC as “Hollywood,” which Ortiz played off with a laughing “knock it off!” each time.

The friendship, which was forged over the period of time that they took to finish the Mona Lisa album (out on October 26), was a natural end result. But the rapper and the producer had respect for one another, said Brown, before they recorded one note inside the studio.

“A few people put the bug in my ear about [Joell],” said Brown. “We didn’t really know each other personally prior to this project. It ultimately worked out for the best — he came across as so humble and so down-to-Earth. He’s not all about himself.”

It’s a sentiment that Ortiz echoes. “This guy [Brown] is so passionate about his work,” he said. “And when he sent over the stuff [what would become the Mona Lisa album], I thought it was a pretty dope piece of art. So we went to Detroit, to the Motown Museum, and we just vibed out and knocked it out.”

This one-two approach to rhymes and beats has made Ortiz one of the most respected MCs in Hip Hop today — even though he’s not, necessarily, a well-known name. Though he’s perhaps best known for his work in Hip Hop supergroup Slaughterhouse — alongside Royce da 5’9″, KXNG Crooked (formerly Crooked I), and Joe Budden — he’s had a series of deals from Jermaine Dupri’s So So Def to Dr. Dre’s Aftermath. For a time, too, Ortiz was signed to Shady Records as a solo artist.

But Ortiz — who has collaborated with everyone from KRS-One to Kool G Rap, the latter whom cited Ortiz as the “one to watch” during his Riches, Royalty, and Respect promo run — says he’s okay with not being a household name, joking that he’s “apartment-hold,” and that’s enough for him.

“The places and people that I speak to — that’s who knows me,” he said. “That’s what matters. I’ve traded bars with some of the world’s best MCs — that’s what counts. I don’t let what’s cool influence me and my rhymes. I’ve got this voice for a reason — I stand for what I stand for, and I want to be honest with my craft.”

Brown — whose seminal 2011 album, Clouds, received mixed reviews at the time of its release, but to which time has been rather kind — echoes Ortiz’s sentiment, preferring to put out a consistent delectus over a trend-chasing compilation.

“I’m not an ‘evolver,’ I’m a ‘revolver,'” he said. “A lot of producers out there say they want to change with the times — and that’s cool. That’s great, in fact. But I stay true to what I love — what I listen to. I grew up in a certain era, and there were no gimmicks involved in the artwork. Could I switch up my sound to attract a whole new set of fans? Sure. But I would be alienating my day-ones. I can’t sacrifice those loyal fans for a few fair-weathered ones. And that’s the most important thing I want to get across — I’m not for sale, and I’m not for the moment.”

This quest for loyalty and respect over fame and riches is echoed throughout the Mona Lisa album. Only DJ Los and Ortiz’s Slaughterhouse compadre Royce da 5’9″ make guest appearances on this record, and whether Ortiz is rapping about four chicken wings and pork fried rice (on “Reflection”) or about trying to impress Nas, JAY-Z, and Eazy-E (on “Decisions,” the first single off the album), he’s making it clear that he raps what he knows about, and he’s not going to clout-chase to get your attention.

What’s more, as one who is now considered an “elder” in Hip Hop, he’s well aware of his newfound “oldhead” status, and accepts that it comes with a certain sense of responsibility to teach what he knows to the younger generation of rappers, regardless of whether they listen to him.

“See, back when I was coming out, if you didn’t get a co-sign, you weren’t coming out,” he said. “Now, you’re 16 years old, you put a phone to your face, and you get an album. What do you know about life? What did I know, really? I didn’t know a thing about money at 16 years old. But now, of course, I’m older, and I know what I know. And I got two sons — I’ll be damned if I’m not going to speak on the truth and teach, even if they don’t listen. Even though we didn’t listen to our parents, they still said what they said to put us on the right track. And that’s our responsibility now — there’s too much on their brains, too early, which is why they’re doing all these drugs, and that’s what we have to do to help them: be that filter through which they process information.”

“50 Cent is considered ‘old school’ to these young rappers,” concluded Brown. “That’s a whole different world from what I come from. Hip Hop is a genre that ages its legends when in reality, all they’re doing is trying to bring awareness to certain things — things that they went through, so you don’t have to go through it. As a culture, we’re used as a tool more than anything else — we sell everything from vegetables to sneakers — but the ones who should be using the tool, don’t. And that needs to change.”