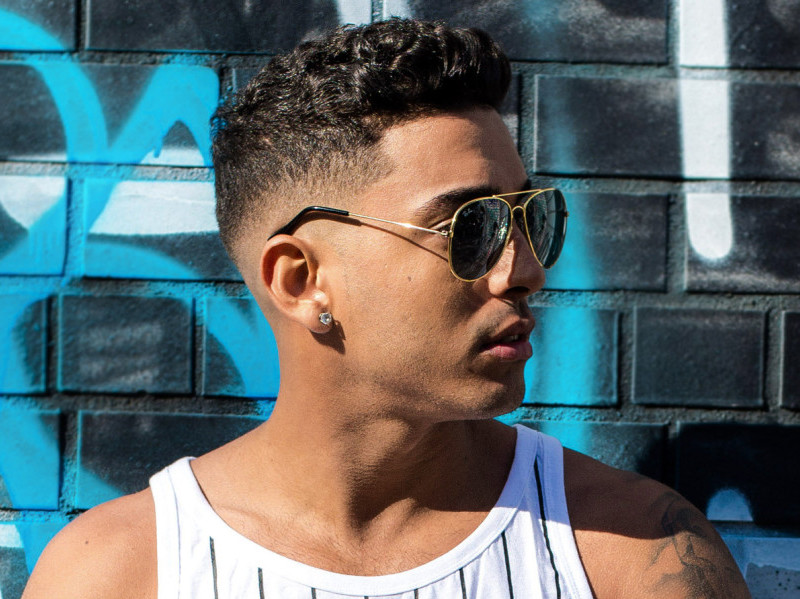 During the past few years, it’s become fairly common to hear Spanish in Hip Hop hits as Latin music has permeated into the mainstream. 25-year-old Rio Santana wants to introduce a third language into the American market — Portuguese. The Brazilian singer and rapper is not only fluent in three languages, he also jumps between styles; his material spans from R&B to alternative rock.

Earlier this year, he released a soulful song with controversial rapper XXXTentacion titled “I don’t even speak Spanish lol.” The catchy track helped ? debut at No. 1 on the Billboard 200, has racked up millions of streams and will be followed up by two more collaboration singles set to be released in the near future. In 2018, Santana plans to build off this momentum with an EP and album featuring production from certified hitmaker RedOne. HipHopDX recently spoke with the up and coming singer about his eclectic music, the growing Latin market, and whether musicians should collaborate with artists facing sexual assault and domestic abuse allegations.

HipHopDX: What were your musical influences growing up in Miami?

Rio Santana: Growing up in Miami my musical influences were Michael Jackson. I grew up with, Tupac, Biggie, Lil Wayne, and the whole Cash Money movement — that’s what I was raised around and that’s the music I heard growing up with on the street.

HipHopDX: Mainstream music has started embracing Latin music. Luis Fonsi’s “Despacito” was an international crossover hit and Cardi B’s #1 debut album has a song featuring Bad Bunny and J Balvin called “I Like It.” What do you think about these hits? How do you want to build off of this trend?

Rio Santana: For me it was never a trend, I have been doing this type of music and it just seems like the perfect time now for the audience to accept it because of the examples you gave like Cardi B and “Despacito.” It’s definitely something we have been doing and I just feel like its a good thing for what I am bringing to the table. I also have a third language, which is Portuguese and because I am Brazilian that’s something I want to incorporate into the market as well. Not just [music] that has English mixed with Spanish but also some Portuguese as well because Brazil is such a huge market and it’s amazing what I can do.

HipHopDX: How did you first get involved with music?

Rio Santana: When I was in middle school, I used to mess around with melodies and write lyrics. I just started writing and it went from there. It evolved with time.

HipHopDX: You have a song on XXXTentacion’s new album called “I don’t even speak Spanish Lol.” How did you first link up with XXXTentacion? What was the experience working with him like?

Rio Santana: Me and X are actually from Broward County [in Florida]. We were working with the same producer. I was working at that studio and I found out he was there one day. I pulled up, we listened to some tracks, and I showed him some of my music. We had a good vibe and our friendship began. He came by our new studio a couple months later and we did “I don’t even speak Spanish Lol” which was dope. He asked if he could put it on his album and I said, “of course man.” In return, he gave me his own song that I will be releasing in the future. So stay tuned for that.

HipHopDX: What are your thoughts on the numerous domestic abuse and sexual assault allegations against XXXTentacion?

Rio Santana: I have nothing to say about that because I know X from this point on. Whatever happens in the past, I don’t know anything about. The person that I do know is a different person. He’s definitely a good dude and I don’t believe any of these allegations.

HipHopDX: Did you know about these charges before collaborating with XXXTentacion?

Rio Santana: No, I didn’t. Like I said with us it’s strictly music. Our connection with music is on another level and that’s what we focus on. You know what I mean?

HipHopDX: You would have had to been aware that’s he’s facing these charges because it’s been so well-reported on, right?

Rio Santana: I don’t know anything about it though. I am just strictly music involved. You know? It’s just creativity. I feel like the album is amazing and what we did on that song it’s growing drastically — we have over 30 million streams already and it hasn’t been a month. Which is crazy because the song is picking up well and doing number. In a couple months, we can take that song worldwide.

HipHopDX: Do you think artists should still collaborate with people who face sexual assault or domestic abuse allegations? Should they opt out of these collaborations after these allegations come to light?

Rio Santana: I don’t know anything about the allegations, like that. I haven’t looked into it. I feel like people should work with who they want to work with regardless of anything. Regardless of any personal problems, do you know what I mean?

HipHopDX: Have you received any backlash regarding this collaboration?

Rio Santana: I received anything but positive energy and growth from this collaboration. It’s amazing to see how much of a following X has. The fact that we are from the same hometown is perfect. I have a following, he has a following, and together we just build a movement for our state and its crazy. Right now, Florida is on the map and we have a lot of artists coming out of Miami and Broward and there’s still more to come — just stay tuned, to see what will happen.

HipHopDX: Who are some other artists you will be collaborating with in the future?

Rio Santana: As of now, I have another single with X coming from my new project and it’s called “Arms Around You” and I will be announcing a release date for that. I am also in the works of doing a collaboration with another Broward County artist named Icy Narco — I linked up with him in LA. I have a couple other features in the works as well. I am working a big producer, a multi-Grammy producer named RedOne. He helped build the career of Lady Gaga and he’s worked with Enrique, Pitbull, and French Montana. We have a song we just did and it’s French Montana, Daddy Yankee, and RedOne. It’s called “Boom Boom.” Its actually already out and has 100 million views, but we did a remix version. I did a remix version in Portuguese which is going to be crazy.

HipHopDX: What are some other genres you’re inspired by?

HipHopDX: Can you tell me about your debut album?

Rio Santana: I have an EP that’s coming out soon and it’s called Potions and that has the whole vibey feel. As far as my album, that’s something I am working on with producer RedOne that will be announced in the next coming month.

HipHopDX: Any other projects planned for 2018?

Rio Santana: Man, everything is coming! I have plenty of singles coming and music videos on the way. Stay tuned for new Rio Santana.

Keep in tune with all things Rio Santana by following him on Instagram @riosantanaofficial.