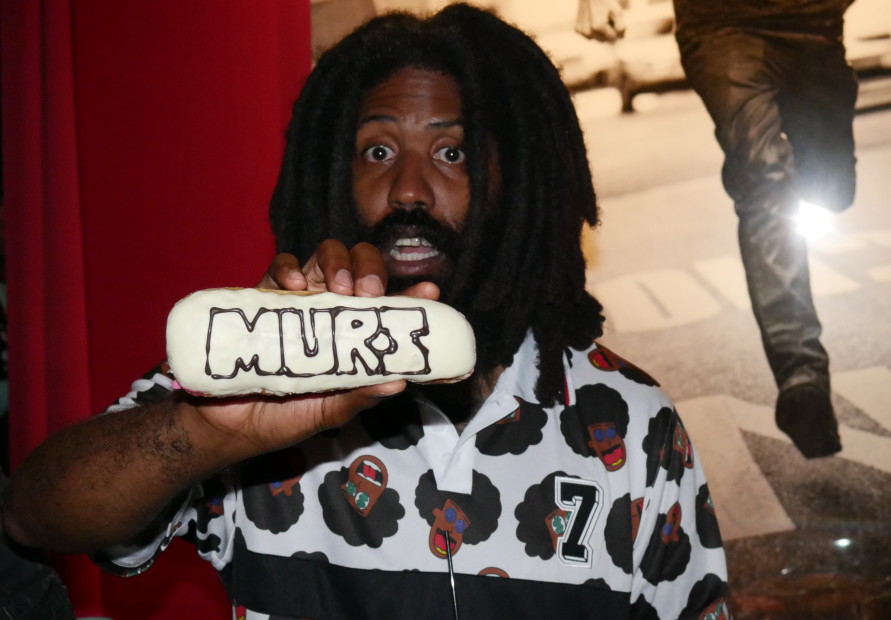 As a testament to Murs’s consistent artistry, the record has an eclectic set of tracks that range from the introspective to lighthearted. The day after his album release party in Hollywood, the host of The Breakdown was in good spirits and happy to discuss his creative process, social media’s impact on Hip Hop, and the emerging artists he’s eager to work with.

HipHopDX: Happy birthday! Do you have any new goals for this year?

Murs: Yeah, my goal is to focus on rapping for once in my life. No festivals, probably no Breakdowns. No anything. [I want to be] touring and rapping as much possible and promoting this record. I feel like this record has a message that could be embraced by a lot of people and it’s about finding those people.

HipHopDX: Congrats on the new album. How was your approach with this album different than your previous projects?

Murs: [I had a] very similar approach to my previous projects. It’s just that I had a lot of crazy shit happen over the past few years. Finally, after the death of our son, I felt like I hit rock bottom and kind of [could] assess it [all]. For Have A Nice Life and Captain California I was still going through it, I didn’t know what the fuck was happening and then the bottom fell out of my life last year so it was like alright now I can assess it and put it all into music. But other than that, I just had one producer which I really love doing. I feel like I do my very best work with just one producer. I also had a limited amount of time — I don’t need a year to record a project. They gave me a five-week deadline which was enough time.

“I hit rock bottom career-wise and personally and there’s only up to go. I am looking forward to it.” — Murs

9th Wonder and I do all of our albums in a week, never more than six days, so between five weeks and six days was a lot of ample time to get a record in. This was enough time to establish a friendship and a working relationship.

HipHopDX: Your album title — A Strange Journey Into The Unimaginable — is so compelling. How did you come up with it?

Murs: I wanted to put something with ‘strange’ in it because this is my contractual end with Strange Music as far records go. Who knows what could happen? This is my free agent year! The album got together and I was thinking ‘Strange Journey’ but I wanted to make sure it was something Seven liked. People might not know [this] but I am a big fan of musicals. So I got to the musical which is Hamilton. And there’s a song in there about Alexander Hamilton’s son dying and they use the word ‘unimaginable’ and that’s how it feels when you lose a child and people are always like ‘I can’t imagine what it feels like.’

Career-wise, my last album was my worst commercially selling album since I’ve been putting out records commercially. I wasn’t able to promote it because my son died two weeks after the release. But just coming back and saying alright, I hit rock bottom career-wise and personally and there’s only up to go. I am looking forward to it.

HipHopDX: In the opening verse of “The Unimaginable,” you contemplate whether if you were able to turn your tears into a chain, you’d gain social media fame. You’re an industry veteran so you’ve probably seen Hip Hop transform because of the internet. What do you think has been the impact of social media on Hip Hop? Has social media encouraged this flashy excess you discuss on the song?

Murs: It doesn’t encourage it. I think rappers have always been flashy. There’s just more of it. Social media has made more of everything. I think it makes it easier to get caught like with the Amazing Bow Wow Challenge, where he’s faking it [having wealth]. Rappers were once able to fake it more when there wasn’t social media. It has lifted the curtain up on a lot of behavior and has also given a platform for more stunting, flexing, whatever you want to call it. But I don’t think it’s any more or less popular. Social media has definitely made Hip Hop beefs more interesting. If you’re fraudulent, you’re going to get caught slipping and someone is going to make a WorldStar video.

HipHopDX: That song also touches upon some serious personal troubles you’ve been through. What was the experience coming clean like that?

Murs: It’s pretty cathartic to get it out there. A lot of people say its therapeutic to work out those feelings in your art but what’s even more therapeutic for me is [both] my pain and my hopefully healing energy bouncing off of other people who tell me it works for them, that’s what’s complete to me. It’s not just a one-way thing where I spill my guts and I’m happy that I threw it all out there when it comes back to me as love, that’s when I know the journey is complete. I may not sell a million records but already people are saying ‘thank you for releasing that song it got me through my day’ or ‘you have no idea what I’m going through right now’ that helps my healing, knowing other people are healing.

HipHopDX: Besides introspection, your album also has some lighter and more playful moments. Like on “Superhero Pool Party,” you rap to your son about going to a made-up party that’s packed with comic book icons. Can you tell me the backstory to this track?

Murs: Seven sent me the beat and I was in the car with my wife and I was like ‘what does this sound like to you’ and she said ‘it sounds like a pool party.’ I was like ‘cool’ and then she said ‘wait, it also sounds like a superhero song.’ So I said, ‘okay let’s name the song “Superhero Pool Party.”’ She was like ‘what?’ I had been playing the beat for weeks and I couldn’t think of anything I liked. I had some song ideas but I didn’t like it and then when she said that I said, I said ‘fuck it, if I can’t think of anything, I am going to go with that.’ I did it.

And I hated it. But then I played it for Dave, the vice-president of Strange [Music], and he loved it. I was like ‘this is so stupid.’ But he said, ‘You and Seven are the nerdiest people on the label. This makes so much sense! You are always going to Comic-Con, come on man!’ I said ‘Fuck this song.’ But I liked to being pushed and Dave is someone I respect and love, so I worked on it. I played it for my son, who wasn’t on it originally, and I couldn’t come up with a hook for the song. I played it in the car a bunch of times and during the first listen, he asked,‘Where is Spiderman? Why isn’t he in this?’ And I said. ‘Fuck Spiderman.’ We talk crazy to one another and he gets a kick out of it. He also asked ‘You didn’t put Black Panther on the song.’ So I was like, wow from one listen, you picked up on that, so it’s engaging even for a five-year-old. There might be something to the song. So I made the hook simple.

I was doing a Breakdown on the Beastie Boys at the time, and I missed that energy — silly, fun raps. So, I did a hook like that [Beastie Boys] and I put my kid on it.

HipHopDX: How did you link up with your producer Michael “Seven” Summers? What was it like working with him?

He’s the producer of Strange. He’s done all of Rittz’s albums and he’s done Tech N9ne’s albums. 90% of Tech’s music is produced by him and probably 70% of music coming from Strange is by him. I have yet to do a full album with him and we had a mutual respect — I was a fan of his work and he was a fan of my work, so it was just a matter of time. I thought he was a little bit too timid. I told him, ‘I can’t work with you unless you tell me my shit sucks, I need a producer who tells me that’s bad let’s do it again or we are throwing that song off the album.’ I gave him full creative control over album cover, titles of the song, the songs we shot videos for. [It] was all up to him and his approval. He flew the ship. He said, ‘I usually don’t get to do that, most artists come to me.’ So, I said, I want you to dictate.

HipHopDX: Who are some artists that you’d like to work with in the future?

HipHopDX: Any chance you will ever top your Guinness World Record for the longest rap marathon?

HipHopDX: Has anyone tried to top it?

Murs: Yeah! Red Bull stole the whole campaign and got some Spanish kid to break it two weeks later.

Murs: I have no idea. It depends on how this album works out. If people like it, I will do something else. I am at a point where I can do The Breakdown or a podcast for the rest of my life. I love recording music and seeing what comes up. If Jaden Smith calls me and asks me to pull out an album, great, I am a free agent! If Strange wants to resign me, I can come back and do another one. I am going to focus on me. I hopefully don’t want to do more collaborative albums because I just want to focus on myself as an artist. So, who knows?

I was joking about [just] doing The Breakdown and podcasts by the way.

Stream Murs’ A Strange Journey Into The Unimaginable on Spotify now.