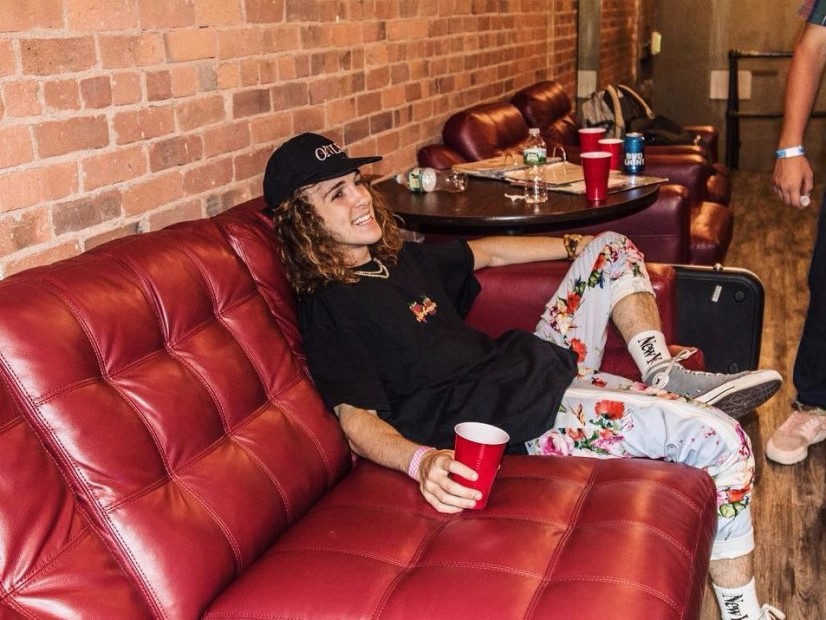 People are able to achieve stardom from a simple YouTube video these days, but for Connecticut rapper Felly, his videos are just one layer of his story.

At 21-years-old, the University of Southern California graduate has already gained a sizable cult following with his Young Fel EP and breakout hit “Desert Eagle.” While singles off the project have garnered more than over 10 million streams on Spotify, Felly is attempting to keep the momentum going with a brand new project, Wild Strawberries.

Although he recently moved to New York City, Felly decided to pay Los Angeles — his former city of residence — a visit. HipHopDX caught up with the burgeoning rapper to discuss how JAY-Z changed his entire music career, why he likes experimenting with new sounds and what he wants his legacy to be.

HipHopDX: For those who don’t know you, tell us who you are.

Felly: What’s good. I’m a musician from Connecticut living in New York City. I’m 21. From a squad 2273 — they are a conglomerate I found in LA.

DX: How does a kid from Connecticut grow to love Hip Hop?

Felly: Um, boredom. And desire to break out of mundanity and boring shit.

Felly: I would say it’s like a blend of being laid back and enjoying life and accepting the good, but also really having a fire and pain and desire for more. And like a deeper look into what is all this. So that could drive someone kinda crazy. So, it’s kind of a balance of that and then somewhere in the middle.

DX: Who are your musical influences?

#Felly lists his musical influences and explains how #JayZ's "4:44" changed his whole trajectory in life ?? @felly

Felly: That shit changed my whole trajectory in life. That’s why I didn’t sign any deals. I was telling someone yesterday, it’s like what I attribute my new lane to. I was about to sign a deal, but JAY-Z just inspired me to trust yourself and believe in your own power. And that you can do it yourself. I mean it’s been preached a million times, but for some reason, 4:44 is the one that actually hit and was like this is the way. I love Hov. He’s like a teacher to me.

album is out. bio ? #wildstrawberries

DX: How has your image or ethnicity hindered or propelled your career?

Felly: That’s always going to exist for everyone, so there’s no cop outs or nothing. Everyone has some type of thing that you can pick at them for being. It does both — it does help and hinder. It hinders just because judgements — they can get you down. You can feel defeated at first, but then it also helps because it pushes you to prove yourself, and to prove that you’re not just this little fuck boy that they may perceive you as, so you go harder in certain situations. But also, it’s just always going to exist. It’s just what it is.

DX: Have the hate comments affected you?

Felly: Not really — if you have your good people around you. I was worried at one point when there wasn’t enough hate. I was like, ‘Damn, they used to hate on me three or four years ago. I ain’t seen a bad comment in a while, I must be doing something wrong.’ You want people to be like iffy about your shit or kinda like pressing you because it’s like you have to leave some fans … not leave them, but grow beyond them. And they’ll thank you one day. They won’t get it at first, but they’ll thank you one day.

DX: You have a cult following. A lot of people nowadays are YouTube stars. What was different about your journey or what worked for you?

Felly: I used to do shit like that, in that vein. But no, that wasn’t none of it. Honestly, I think my ‘cult following’ and the kids that are deep and love my music, it doesn’t even come from the shit that’s popped off or like the flashy type videos you see or like the bangers. It comes mostly from what I like to call the ‘bedroom raps,’ which are like the more in your head, younger deeper shit. Back when I was in Connecticut and Waking Up To Sirens, which was an album I released my freshman year [three years ago], stuff like that is contemplative. I wouldn’t call it conscious, but it’s definitely more deep and in your feelings, and in your headphones and in your bedroom. That’s why I call it ‘bedroom raps.’ It’s not really something you play at the club or you spin to a bunch of people. But it’s stuff that can really touch people because it kinda has a lonely feeling to it. So advice to kids, I would say just don’t try to do anything. Don’t try anything. Just be what you are and let yourself spill what you are ‘cause some of the ugliest moments of myself are when I see myself trying to do something, and that’s what my new album’s kind of about. Like fuck that, don’t force that or you’re gonna look like a fool.

DX: Tell us about your new album Wild Strawberries. It’s supposed to showcase your growth as an artist. What’s different?

Felly: Wild Strawberries has a bunch of different vibes of me. It’s kinda like a showcasing of my spectrum. It just kind of shows that I can do anything. And so, maybe on the next album I’ll pick a more focused or direct route to go. But on this one, it’s kinda just like, ‘Yo, I can do all this shit, so watch me spit fast on trap beats. Watch me do some slow mellow shit. Watch me do something poppy. Watch me do something like this or that.’ But it covers all the bases. It’s just wild. That’s what wild means to me. It’s like you don’t know what you’re going to get.

DX: Any major Hip Hop artists you want to collab with?

Felly: I wanna work with Kanye [West], I wanna work with 21 [Savage]. Off top, I would mostly want to work with groups that I see as like very musically evolved — like Hiatus Kaiyote, Anderson .Paak. I think he’s [.Paak] a genius. His band, Free Nationals, I think they’re really fire with just music. Just the music heads. I like music like there’s always gonna be trap rap, and people making beats and spitting hard shit to it, catchy shit. I just wanna make some shit that’s like really cinematic almost.

DX: What do you want your legacy to be?

Felly: I want to move people in a positive direction to become what they want to be and feel comfortable with what they are. And to feel empowered in a world that like … everybody wants to be somebody else and no one feels good about their own shit. Like even the most poppin’ people, they’re still looking at other people. I just wish everyone could feel comfortable because then they’ll have more ease to be themselves and not just do some wack shit. It’s very polluting this world. You could really do some shit that just doesn’t fit right. Music and word is very powerful, so you could do a lot more damage than you can do good if you do it wrong, which is something I try to stay conscious of. And I’ve fucked up a bunch of times, so it’s not like I’m perfect on this shit. But it’s an everyday struggle to stay in your own lane.