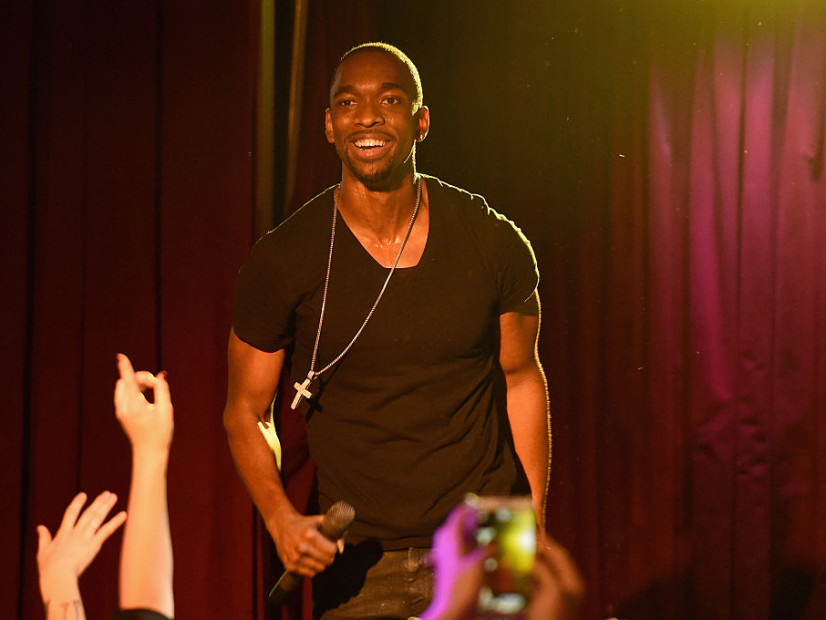 Honolulu is an absolutely perfect place not to work. But if you’re a post-SNL Jay Pharoah, you have way too much going on to settle for piña coladas and pineapple and, as he said on Instagram, getting “lei’ed.”

For starters, you would be an integral part of the star-studded animated comedy Sing (in theaters today), a certified Jedi master of celebrity impressions, an American Music Awards host vet — plus you’d even do interviews with HipHopDX to promote your film.

“When I had my previous job, a lot of opportunities, movies, cartoons, appearances — all of those got swept under the rug because I couldn’t do them at the time. Now that the chains are off, my availability has increased.

On top of the forthcoming Showtime series and voice work in the Call of Duty: Infinite Warfare video game and Comedy Central’s Legends Of Chamberlain Heights, the 29-year-old part-time rapper reveals that recording artists still want him to take time out to do features for them.

“Over the summer, I was working with Musiq Soulchild on one of his projects that I don’t think he put out yet. I’m working with some underground folks that you all are about to know. I’m almost finished with this project. I want to do something really epic, conceptual with videos and everything tied together. So I’m working with Myles Williams. He’s worked with T.I., Iggy Azalea, Lil Wayne, Drake, Rick Ross, etc. And my cousin produces as well. Shout out to Andrew Hypes — I’m working with him.”

“I’m trying to be that serious … that Will Smith thing but have people like, ‘He got serious bars.’ It ain’t no, ‘Uh! “Summertime”‘ [Laughs]. It ain’t that.”

“More like, ‘These songs are dope! Y’all sleeping on Jay Pharoah!’ Ain’t no Nick Cannon bars, nigga! You stay away from that. [Laughs!]

“These are all hardcore, dope, real stuff you can relate to. I put the lyricism in there because I’m a fan of that. Like Cole, Kendrick, all of them, even Chance. I love Chance. That’s my guy.”

Confidence in 2016 is not only a primary part of an MC’s makeup, it’s typically the one that rises to the top, pre-release. Jay not only assures DX that the project will be a full-fledged album but that it will also take unsuspecting ears by storm, especially when they realize the funny man is doing the spitting.

Speaking of unsuspecting ears, Pharoah, being an avid Hip Hop fan, was taken aback like most fans of “lyricism” when a certain popular/polarizing rapper’s commercial prowess was solidified through an actual commercial without the sturdy musical catalog to justify it.

“These new wave rappers that came in? Until I saw that Sprite commercial … like, who that boy with the red hair? Lil Yachty? Lil Thotty? Who is that? How the hell … I’m like, yo [laughs] … I’m looking at this … has he ever put out a mixtape? How did he get a Sprite commercial? Nigga, I put out a mixtape two years ago and I ain’t never been on Sprite! What’s happening? I need to yell at my agents real quick. Gotdang! Who is his agent? Shout out to him but you know what I’m saying [sings incoherent melodic gibberish]. What the fuck is this? What is this shit I’m listening to right now?”

The only reason I paid attention to [“Broccoli”] is because D.R.A.M. is from my area [Hampton Road] but who messed up this song??? But shout out to him. He’s doing his thing and I’m not hating on nobody getting bread. I was just amazed when I heard it but there’s a lot of new rappers I have to watch The Breakfast Club to keep up with. Because there’s so many.”

Jay cites the praise he got from March’s digital release of the movie Get a Job as anticipation to show people what he’s really working with acting-wise.

“As far as movies with one-character development, that’s nothing. I’ve been itching to show everybody these chops. I’ve been doing theater and acting since I was like eight-years-old.”

Photo: Illumination Entertainment
Pharoah plays Meena’s grandfather elephant in the new PG-rated Sing movie. In other words, you can take your kids to go see it.

“The biggest surprise for people is to see it be funny and not be an impression.”

But between rapping and movie roles, Pharoah wants fans, critics and newcomers alike to be prepared for his next stand-up special. “It ain’t no freaking game” — as he so eloquently puts it.

“This shit is epic, bro. I’m dialed in. Showtime at the Apollo cut my 15-minute set into two minutes — I wasn’t happy about that. But people in the building told me I destroyed that shit. I got a standing ovation at the Apollo. It’s crazy. And off of real topics. But yeah, they chopped the HELL OUT THAT SET — WHOOO!”

“But all the ropes are off. I don’t have to hold my tongue like I did before. But I’m not playing no games.”