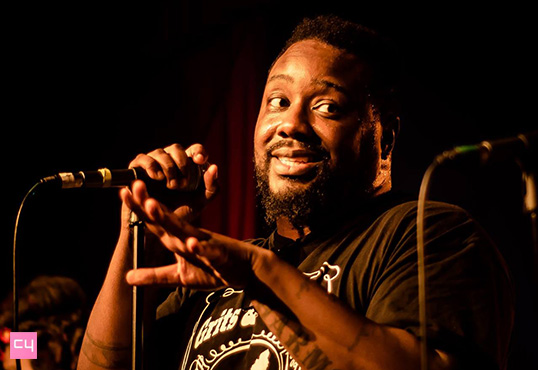 Phonte Coleman’s influence on Hip Hop is well-known — at least to those who are in the habit of knowing things.

Over the years he’s watched many of his unofficial siblings reach the greatest heights of celebrity, arguably with a sound similar to the one he pioneered as part of North Carolina rap trio Little Brother, along with Big Pooh and 9th Wonder.

Since that group’s demise in 2007, his main output has been through The Foreign Exchange, a project that started as an online correspondence with producer Nicolay, but which has grown into an eight-piece touring band. Over five albums, the Grammy-nominated group’s sound has pivoted more from rap to neo-soul, while still keeping all of its signature warmth and smoothness.

In that same time, Phonte has shifted more from a rapper who sings to a singer who raps — on the most recent album, 2015’s Tales From The Land Of Milk And Honey, he’s more Rick James than Rick Ross.

Still, he keeps one foot in the rap game, with the follow-up to his 2011 solo debut Charity Starts At Home scheduled for September 22, called No News Is Good News.

That title points toward someone content with the lane he’s in and the life he’s leading.

“A quiet day is a good day,” he told HipHopDX before taking the stage in Toronto on May 27.

DX: Do you feel that Foreign Exchange over the last five albums has gone from being primarily a Hip Hop group to something different?

Phonte: Personally yeah, I think in a lot of ways I always did. Even with Little Brother, it was never just straight rap. It always had the elements of soul in it, the way I’d sing hooks, and stuff like that. Throughout my career I always tried to incorporate as many of my influences as I could that made sense at the time. It represents where I’m at right now or where I have been moving all this time.

Phonte: [Laughs] I think the first singing rappers were probably The Sequence. That was Angie Stone. I would think maybe moreso the early old school stuff had elements of singing and rap. It definitely wasn’t Drake and it definitely wasn’t me, or Andre 3000. That rap and singing mix is something that has always been going on.

Phonte: I think everyone from Wale, J. Cole, Kendrick, Drake. I think everyone who came post that 2007-2008 wave, they were definitely Little Brother influenced. We helped open that lane. I mean shit, even Kanye West. That’s the same shit.

DX: Do you feel that Little Brother gets the credit for opening those doors for a lot of these global artists?

Phonte: I mean the people that know, know. That’s really all that matters to me. I think people that really know music and really watch the music and saw it as it happened — I think they know. When I’m performing people tell me all the time. I’ve toured with Kendrick, on the last Little Brother tour in 2010. Kendrick opened for us. Kendrick was like “Yo man, thank you bruh. I’m a big fan.” And it was cool just to see that. The people may not know but the artists damn sure know.

DX: The three biggest Hip Hop artists in the world — or at least the North American version of the world — are Drake, Kanye, and Kendrick right now, and they’re all guys that have either spoken openly about being influenced by you or that you’ve worked with. As you watched them rise, how did it feel to see that?

Phonte: Well for me man, I just had to get to a point. I definitely think when you are younger you just look at stuff like ‘Man! Why did I not get that?’ but after a while it’s like, ‘What’s for me is for me.’ And I had the fortune and the ability to hang with Kanye, like pre-‘Kanye’ and see what that life entails. I just saw early on and I thank God for giving me that early opportunity to see it, and I was like ‘Man this shit is not for me.’

I’m more comfortable being able to be me — in the lane I’m in, making music I want to make. I can do a Foreign Exchange record, me and Nicolay can do this tour, play a jazz fest, and I can turn around and do a record with Kaytranada, and I can jump on a Robert Glasper record. I’m good.

DX: This idea of rap as a family, as older brothers/younger brothers — it’s very much an extended family now with guys down South, on the West Coast, and on the East Coast having very different sounds. How do you view what rap is right now?

Phonte: I think right now because everything is going online, any regional lines have been pretty much blurred, if not obliterated completely. I think that was something else that we, if not pioneered, I think we were definitely in that lane as well and the people would hear our music and be like, ‘Where they from? They from New York? They from Jersey? What!? They from North Carolina!?’ So I think it was that too but now you see that with cats like Desiigner, who sounds like he’s from Atlanta but he’s from Brooklyn, and Lil Uzi Vert that sounds like he’s from Atlanta but is from Philly.

DX: You could also argue that Atlanta sound is permeating all of America right now.

DX: It’s been a crazy week for rap, New York rap especially. We’re talking two days after there was a shooting at a T.I. show that Troy Ave was allegedly a part of, and at this point we’ve all seen the video. Talking about rap and talking about families, that’s very much like your second cousin in the genres of rap. Does an incident like that affect the good name of Hip Hop negatively across the board?

Phonte: I don’t think it should. I mean cause it’s more kids that died at EDM shows than at rap concerts, taking all those pills and overdosing. There are more deaths that happened there. Even just reading that story, a shooting at a rap show? That’s so ’88. I don’t think it should reflect on the music, but by the way the music is treated and how the culture around it is treated, I know it definitely will be. They’re going to hang this at the altar of Hip Hop, and say this is Hip Hop’s fault when this didn’t have anything to do with Hip Hop … I don’t think it’s fair that acts of individuals get pinned to an entire genre of music — but with Hip Hop it’s going to be that.

DX: You have a new solo album coming out. Tell me about that.

Phonte: Yeah, September for my solo record, before that I got my collabo album with my man Eric Roberson. He’s a singer/songwriter out of Jersey who pretty much made the lane for independent soul. He is the guy who pioneered it. He’s an incredibly talented cat. Me and him done a lot of records together. He was on the last Foreign Exchange album Love In Flying Colors, he’s on Zo’s new album SkyBreak which I also co-produced with Zo. We just worked a lot together. We just had chemistry, so he was like ‘Look man let’s just do this record.’ So that album will be out on July 22.

First Zo’s album SkyBreak, which is out right now, then Phonte and Eric Roberson, that’s coming July 22, and then my solo album No News Is Good News is September 30. Ten tracks each joint — I’m trying to go 30 for 30, that’s the plan.

The Foreign Exchange is on tour across America in June. See dates on the band’s website.