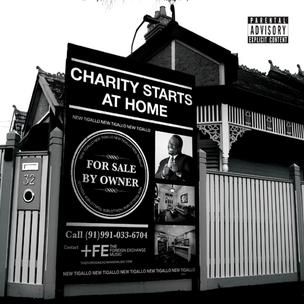 Just when listeners had fully abandoned all remnants of Little Brother, Charity Starts At Home drops. Since the North Carolina rap trio officially announced its breakup in January 2007, it seemed clear where each member was taking his talents: Phonte was nabbing Grammy nominations as one half of the R&B/Soul duo Foreign Exchange, Rapper Big Pooh manned his own solo rap career, and 9th Wonder used his production skills to amplify the sounds of artists like Ludacris and Erykah Badu while helming his Jamla Records. Optimism resurfaced when Phonte and 9th settled their differences, and suddenly we have Charity Starts At Home: Phonte’s official solo debut, which features a third of its production by 9th himself. Thankfully, this record holds its weight by rekindling the youthful spirit from Phonte’s Little Brother days and pairing it with the maturity from his more recent material.

Charity Starts At Home plays like a Best of Both Worlds for Phonte’s career. He was always the more lyrically acrobatic member of LB, so it’s gratifying to see him volley multisyllabic rhyme schemes and punchlines alongside the likes of Elzhi (“Not Here Anymore”

) throughout the songs’ collaborations. But as a married father and music veteran, Phonte’s sung lyrics with Foreign Exchange have been very reflective and resilient, and his rhymes on Charity Starts At Home carry that same heartiness, with wit and technical flair to boot. “Sendin My Love” sees ‘Te investigating others’ fears of commitment when he visits a strip club after an argument with his wife, and “The Good Fight”

dedicates itself to struggling to survive while chasing their dreams. “Fam in my ear all day, and they yellin’/keep it real ‘Te, and don’t ever sell out/ but how the fuck you sell out when ain’t nobody selling?” the latter song quips. “To Be Yours” and “Gonna Be A Beautiful Night” usher Phonte into full Foreign Exchange mode, as he croons over subdued soundbeds.

While many fans will undoubtedly skip around to the tracks that reunite Phonte and 9th Wonder, the other producers on Charity Starts At Home shine more notably. The duo excels when 9th’s straight-edged soul harkens a back to the basics feel on “Not Here Anymore,”

but a lack of variation steers songs like “Eternally” too safely. The best beats here come from lesser-known knob twisters. Los Angeles producer Swiff D adds knock to album opener “Dance In The Reign” and gives a quirky funk to “Ball And Chain,” which sees ‘Te balancing stability with ambition. Possibly the most stirring soundbed is on the album-closing “Who Loves You More.” E. Jones uses a stew of synths and piano runs to back Phonte’s stories about men faced with choices of family, infidelity and street life.

With its substantial subject matter, solid production and tightly-woven sequencing, Charity Starts At Home does exactly what a solo debut should: showcases the artist’s skill set and personality all at once. Frankly, this disc solidifies Phonte’s place as one of the best emcees to ever emerge from below the Mason Dixon line—and with his consistent catalog, future releases are likely to only help the case.