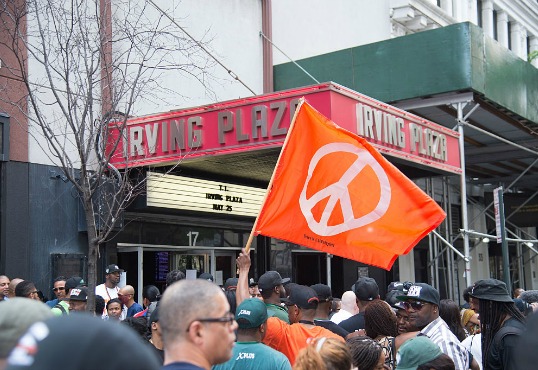 My Views Inside The Troy Ave Irving Plaza Shooting

One moment, I’m debating music with a friend while slinking through a crowd to get closer to the stage so I can have a better view when T.I. makes his entrance. Minutes later, I’m part of a panicked stampede of about 1,000 people squeezing through Irving Plaza’s hallways with hopes to make it out alive.

I had never heard a gunshot in a venue before last Wednesday night, around 10 p.m. In fact, what sounded like the first gunshot was so muffled that I thought I was hearing things. But I definitely recognized the familiar scatter of a crowd – a signature of any highly-populated event interrupted by a shooting. At brawls I’ve seen at concerts before, people usually separate themselves from the fracas while security rushes in to round up the offenders and take them out.

Gunshots just went off at the T.I concert, never been so scared in my life pic.twitter.com/rn0CjpAuaU

But this night was different: people immediately bolted to the door, willing to leave behind the money they shelled out for the show. A normal fight wouldn’t have garnered that reaction; shots were fired, and I had to get the hell out of dodge in case a stray bullet found a new home lodged somewhere in my body.

The venue was scheduled to begin allowing people inside around 7 p.m., so the house was packed by the time the gunshots were fired. That meant that hundreds of people were cramming themselves into hallways that were likely designed to only fit a few dozen bodies at a time. After seeing that the friend I came with was ahead of me, I joined the crowd, maneuvering toward a doorway that felt like it was a mile ahead.

While on my way out, I heard the first clear gunshot – a loud pop piercing the air. It sounded like it was in the standing area that I had just left, but I wasn’t taking any chances – the sooner I could get outside, the better.

Police and ambulances arrived quickly, and news spread on social media just as fast. From the moment I got outside, I was receiving phone calls and texts to assure my safety. I posted a Facebook status to let my network know that I was O.K., and went into journalist mode, spending the rest of my night speaking to police and witnesses about everything that happened.

Out of the hundreds of Hip Hop shows I’ve attended, May 25 was the first time I’ve had to flee because of gunshots. And most of the shows I’ve been to haven’t even had fights. For many of these artists and their entourages, music is a way to escape the poverty-fueled violence that pollutes their neighborhoods. It’s an escape from the circumstances they grew up around, not an extension of it.

The incident was only a terrifying few minutes of my life, but the details would surface over the next couple of days. Rumors flew about the intended target being either Maino or Taxstone; two of the New York City’s more visible figures on the Hip Hop scene. Three people were wounded, and Ronald McPhatter lost his life. Video footage of the shooting was released, and Troy Ave was arrested as a suspect and subsequently charged with attempted murder.

But before Troy Ave’s arrest, and before any details had surfaced about the shooting, NYC Police Commissioner Bill Bratton apparently thought that using stereotypes was a productive way to address what happened.

“The crazy world of the so-called rap artists who are basically thugs that basically celebrate the violence they live all their lives and unfortunately that violence often manifests itself during the performances and that’s exactly what happened last evening,” Bratton said.

Even as someone who feared for my life that night, I don’t blame Hip Hop. Wednesday night wasn’t a Hip Hop shooting; it was a people shooting. And Bratton was irresponsible to say what he did.

Nothing good ever comes from painting an entire group of people as the same – especially the head of police. It drives an even deeper wedge of distrust between police and the people they’ve sworn to protect. And at worst, it actually gives officers a green light to discriminate based on stereotypes, and makes bigots feel that their views are justified. Bratton’s comments seem like they’re aimed at passing the blame instead of seeking to solve a problem.

Not to mention that other genres are rarely given the broad stereotypes that Bratton used. As critic Craig Jenkins pointed out, whenever country, punk rock and EDM concerts have mosh pits, brawls, and alcohol and drug overdoses, the genres don’t receive the brunt of the blame – especially not from the head of police. As New York City Mayor Bill DeBlasio noted, violence is a part of pop culture as a whole, not just Hip Hop. Security isn’t stereotyped as irresponsible either, even through weapons and drugs make their way into the venues on their watch. (Attendees have blamed lax door checks on guns getting inside, which I can at least partly attest to; my friend’s purse was not checked, and another man I spoke to said he was allowed inside unchecked and without a photo ID.)

What happened at Irving Plaza can happen anywhere – whether the performer onstage is holding a microphone and wearing wheat Timbs, or wielding a guitar and wearing cowboy boots. So after Wednesday’s scare, I have a new concert protocol: stay aware of my surroundings, and know where the nearest exits are in the case of a shooting. And when a concert goes without incident, no matter the genre, never take it for granted.