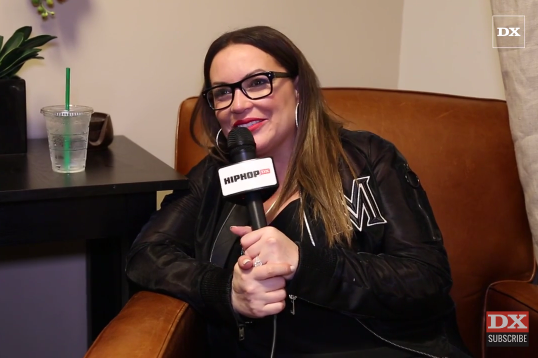 Story To Tell: How Angie Martinez Became A Hip Hop Legend Through Radio

Angie Martinez, a.k.a. Thee “Voice of New York” who has interviewed countless Hip Hop legends over the past 20 years, recently took upon herself to properly archives all those classic stories through the release of her book.

The legendary radio host embarked on a bi-coastal tour to promote the release of My Voice, a personal reflection on her encounters with the likes of Jay Z, Nas and Tupac.

No the book is just a moment in time, it’s not my whole life, clearly. God willing I have a lot more to do, but you know what I just got to a point in time where I had felt like I had something to offer to people, something to say, had enough experiences, enough to reflect on, and enough contribution to the culture that hasn’t really been documented well, so I felt like it was time. It took me about a year [to finish the book], maybe a little bit more. You know it’s a process, I had a long career, Ya know I’ve been on the radio for about 20 years so there’s a lot to get to.

I didn’t want it to just be about that. I wanted to tell stories and contribute to the culture, but also learned some lessons along the way so it’s a coming of age story of how I get here. Some of the things and mistakes I’ve done.

Being Called A ‘Hip Hop Legend’

I don’t really think of myself in that way, I try and not to put too many labels on myself, so how other people see me or perceived me or my career is up to them I do get a lot of love, I know people do feel connected to my story, and I know that I have a lot of moments not just in New York on the radio, but just been part of a lot of moments within the culture that have spread across the country; from the Nas/Jay Z battle, to Pac and Big, I mean even to Baby interviews; just over the years for the Locks and Puff (that was a big one) I go through all of the major, major, ones even to recently had an amazing interview with J. Cole that people tell me that has changed their lives.

I feel like I have been lucky enough to be in a position to have these moments happen on my show and I felt like people should know a little bit about what happens beyond the scenes, what it takes to this point, to have a career like mine; some of the challenges, some of the opportunities for growth, it’s my contribution.

I couldn’t become a shock jock that’s just not who I am as a human being, that’s not my make up. Not to say I don’t appreciate a good one, that’s definitely a type of personality. Listen, I think whoever you are and you’re truly yourself and it’s what you really are, like take someone for example like Charlamagne. On and off air he’s the same kind of person and I respect him for that and I enjoy him on the radio and enjoy his interviews. But if I was running around trying to chase somebody’s else truth then I’m starting off in the wrong place. So all I ever tried to do was be myself. I care about the culture, I care about the music, and I always operated in that place.

I talk about that a lot in the book, because I’ve known Jay for a very long time, I was one of the first people to play his song on the radio, had a feature called battle of the beats and I put one of his records in there and I remember not really knowing who he was and so I’ve known him since then. So I’ve seen his career and had the opportunity to interview him pretty much at every point in his career. There’s been times absolutely, we use to have a routine he used to come and play me music; he’d drive by the station told me to run downstairs so he could play me the whole album before it would come out. And I was always honest, always gave him my opinion. I made some mistakes, I was wrong about a few things too but I was always honest, and I think he appreciated that. I’m sure I wasn’t the only person, I’m sure he had a circle of people that he trusted that he ran music by before it came out. But I definitely was not a fan of “Hard Knock Life” first time I heard it (I know that sounds crazy!!!) but you know sometimes you hear something on the first play it doesn’t sound to you like exactly after you hear it seven million times, and you’re like, ‘Oh ya, it’s a smash!’

I’m a fan of Jay album cuts, I’ve always liked his album cuts better than his singles, that’s my perspective it’s probably a little different for the average radio listener in that aspect.

If you look at the history of Hip Hop, radio is a significant part of that, a part that’s not documented well might I add to a lot of things that happened, not just in New York hip hop, even I’m sure here in L.A. I’m sure in different places there are these amazing moments that shift the trajectory of what’s happening in the culture some reason they’re just not well documented, it’s not like in the 90s let’s say when Hip Hop was coming of age there was no social media documenting these moments which is one of the reasons I felt compelled to write this book, one of the reasons amongst many. I think radio, it’s like a curator, it’s like a place where people go to, to hear people who you know and you trust deliver you music, deliver you what’s hot right now. And its free, and it’s right there and it’s close to you when you listen, close to you in your car somewhere or at home. There is a certain comfortableness that comes from radio that you don’t really get from other mediums.

I’m still very invested when someone asks me for an opinion I give it to them. When Birdman was in town, he asked me to come by, he had a bunch of new artists. He had a couple of talented kids there and so I gave him my opinion on a couple of things they were doing. And I’m still available, I still offer an opinion if asked.

Getting Birdman To Act Civilized

You know the thing is, I don’t think he likes doing interviews. When I went to Miami, even though I was in his setting, so he had the upper hand, I still don’t think he was all the way comfortable yet. The second time around we have already built a report where he kind of trust me. I’m not trying to hurt him, I’m not trying to hurt nobody by the way when I do interviews. I’m here to help you tell your story, I’m here to help you get out on what you trying to get out. I think at this point we built a relationship and a rapport where he trusts that. And I loved our last interview. Unfortunately [during] our last interview Prince had past away two days after so I had to hold the interview. So it didn’t get to come out till after the whole “respek” thing came out. So respek of course, ruins his whole moment of what I thought was a really good interview; not just for me as it happened on my show and it was my conversation but also for him. I thought it be good for people to see him in a different way because he’s somebody who comes from nothing. However you feel about him, his story is inspiring and I thought it was unfortunate that that happened. Because I feel like it hurt him more than anybody else, because I really thought our interview was a nice thing to have everyone see.

I still have them, I’ve been lucky enough to have so many in my career, I can go back far enough to Big and Pac, three different Jay Z interviews, a 50 Cent with Styles and Cam’ron calling in, even though it was a hostile situation it was very interesting and telling at the time. I can go as to more recent to J. Cole or Nicki Minaj opening up and getting emotional about her relationships for the first time. I had moments where I felt like a really had a connection with people and a real conversation so it’s really hard to pick one [favorite].

I think J. Cole is a student of the culture, I think he is one of the voices we can look at to see kind lead for the culture to go to the next level, definitely one of those voices. It meant for me because I felt that this book isn’t just about stories in the past, it is very much right now. There are lessons that, even me in writing them I can apply it to what my life is now because of things I’ve been through and seen. The industry has changed a lot but for anybody has came from this, it starts with a love for Hip Hop and love for the culture. Its really true, that’s where it starts! And sometimes we get distracted by the business of it for example, blog hits, comments or likes, we’re fighting for numbers out here and sometimes it’s good to be reminded about why we do this. That was my intention in writing the book, and so when J. Cole wrote this quote (that was supposed to be in the back of the book) he spoke to exactly that without me having a conversation with him about it.

My intention was to restore the feeling and remind myself and my audience about some of these amazing moments and what was happening behind them and what it took to make it happen. What he wrote at the beginning of the forward just shows me that there is a conversation to be had from people who had had experiences and how you apply them to what’s happening now. It has to be a dialogue we would be foolish to not have that type of dialogue.