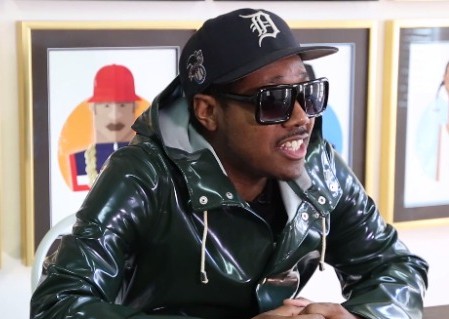 Elzhi Is Smiling In His "Lead Poison" Storm

Everybody goes “through it.” For the average, undiagnosed everyday human being, the difference between depression and sadness often goes undefined, leaving each unique instance with a unique coping situation.

For Elzhi, the former Slum Village add-on who defied the odds by successfully mirroring Nas’ Illmatic, his situation was the complete opposite of what one would expect from a recording artist. He never stopped recording but he stopped putting music out. Five years went by and the Detroit native turned L.A. fixture essentially missed his marketing opportunity to release a “dark, moody” project to attract those going “through it.”

If you ask the articulate MC, born Jason Powers some 30-odd years ago, the step back to reflect was well worth it. Even after some fans toyed with the idea of a class action lawsuit for the tardy due date of his newly released album, Lead Poison. HipHopDX praised the project for its “improved emotional depth” and ability to satisfy nearly insurmountable expectations and Elzhi is publicly cracking a smile now that he sees glasses half full these days.

In his first video interview revolved around Lead Poison, Elzhi breaks down how not rushing his return to rap was one his best decisions yet.

On Inspiring Others Who Can’t See Past Their Own Struggle

“Just to know what [depression] feels like and navigate through it and to finally come out on top…I realized I was looking at life through a surface level. Just looking at things on the surface and to be able to come to that realization, it’s crazy. Just even coming to that conclusion is allowing me to talk about the things I’m talking about on my album and hopefully it will help someone out in the future.”

“I talk about my experiences whether they’re good or bad and what’s crazy is, during the Elmatic [tour runs], after the show I’ll meet my fans; they’ll come and kick it with me. And then they’ll talk about certain songs that might have touched them. I always put my experiences through my music and this time I came with like a purpose and like a message or whatever and trying to be a little bit playful with my situations. Hopefully it does inspire somebody. It was kind of like me turning poison into medicine for myself and hopefully it can do that to somebody.”

“I’ve been off the scene writing and it was songs that I was writing were it was like they wasn’t really true to my experiences at the moment. So I kind of felt a little fake; a little fraud. And people who heard ’em, they loved ’em but you know it was kind of like ‘Ehhh, this ain’t really what I’m going through right now’ and I felt like I owed it to the fans to let them know where I was at in my life so, that’s when I decided to write about what I was writing about and at the same time, using it as an outlet to get out of me.”

“I was stressing out over things that I felt out were out of my control. Like I said, [I] was just looking at life on a surface level, not realizing there was something deeper to it. But once I cracked that code like that, it changed my whole perception.”

Elzhi’s Lead Poison is currently available on iTunes via GLOW365LLC.