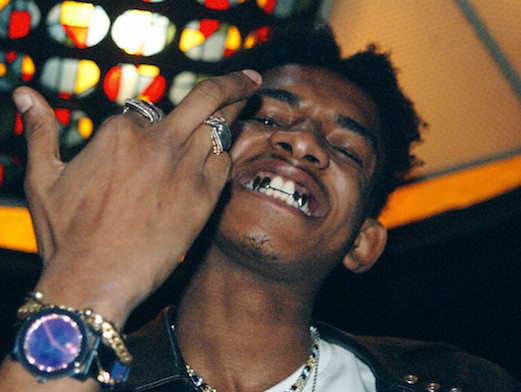 Another Saturday night in Los Angeles has brought forth another wild event with the frantic folks of HAM On Everything. A February party at the Union Nightclub (formerly Jewel’s Catch One) is as crazy as ever with everyone awaiting the headliner ILOVEMAKONNEN. The pulsating light is just enough to cause epilepsy as it rhythmically intertwined with the sounds of pounding 808s. I’m here to see the opener Zelooperz, a card carrying member of Danny Brown’s Bruiser Brigade who caught fire a few years back through his Help album. During the initial meeting in the loud venue, he’s accompanied by producer Skywlkr. Eventually we find a more quiet space in the building’s more older rooms. At that point, the music and visual artist is a few weeks away from dropping his sophomore project Bothic featuring the more lighter turn-up joint “Elevators.”

Zelooperz explains the moment he found happiness out of drug use for his Help follow-up and describes Danny Brown’s fourth studio album as pure dope.

Bothic Is “Blackness and Sparkles”

HipHopDX: There’s a lot of buzz behind the “Elevators” track. Where does that fit into the overall feel you’re going for on Bothic?

Zelooperz: With this project, I was more to myself trying to bring more people into my world. “Elevators” is a party, dance Bruiser jam. If you’re not a Bruiser, you shouldn’t even fuck with it. It’s one of the highs on the record. It’s just one emotion that goes with the music. Everybody likes to dance. It’s just a dance joint for the Bruisers. Bothic is just blackness with sparkles. It’s light in everything. If I was smoking a blunt in the dark and didn’t have any lights on in the room, that’s what Bothic is. Just the tip of the blunt. You know it’s there and getting you high, but it’s so black you don’t know where it’s coming from.

DX: You do a lot of drugs. Any idea how much they affect your current musical output?

Zelooperz: Last winter, I was rolling of Xanax and shrooms. I was falling asleep and doing crazy shit. It was a whole month or two. When I was making Bothic. I don’t be off them like that no more, but I was fucked up off them bitches gone. I was experimenting heavy because it was my second album so I wanted to go ham. I’m about make a monster trying to see how low I could get. I was just gone. I found myself, a better part of me that I go by as Bothic. I found some happiness out of that shit. Not the happiness with being high, after I was so high and done being high, i realized how much shit I had to thank God for.

DX: Will there be transitions between light and dark moments?

Zelooperz: When you waking up in the morning and your water doesn’t work so you have to put a water hose through your window to boil water for a birdbath then go to the best hotels and nice ass studio to create some shit that God gave you to give to the world or sell a painting for bread, all that shit don’t seem so bad no more. God gave me this life to live it. I just appreciate all the darkness that he did give me. I wouldn’t have no bars without the shit. Bars come from the struggle so I can have something now. I had to go through that.

DX: There’s this idea that artist that make music reflective of their darker times should continue to make music like that. Is that a hard balance to give fans what they want, but reflect where you’re at currently?

DX: How much do you think you’ve progressed from Help considering your relationship with Danny Brown.

Zelooperz: Danny doesn’t give a fuck about what anyone thinks about him. To an extent, he’s always moving forward with creation and evolving news ways in going about things. He’s an evil scientist. That’s basically who I am, an evil scientist. I just mix all this shit up and made a crazy ass monster experience. Comparing to how I use to go about music, I usually go about it as pure music. I use to be about making a rap song, but now I just go about making songs. It’s not really rap in my head anymore. I just make songs. Cause Danny is a songwriter, he’s just not a rapper. He’s a great rapper, but he writes great songs.

DX: The music you put out is just as visceral as the visual art you do as a painter. Where do both compare and contrast to one another?

Zelooperz: I put out a lot of random art all the time, all day. It doesn’t matter what it is. It could be a grapefruit or a pair of titties. When it comes to music, I’m putting out something that involves my life. When you make music, you can’t give people too much that ain’t really what the story’s about. You can’t go off the tracks too much. Basically, it’s concentrated into my life more. My visual art, I’m just painting anything and getting bread from the people who pay for it. They give me inspiration and that goes right into the studio after I get a bunch of inspiration. Like, if I whip up a bird in a painting, I’m going to rap about it cause I got $400 from whipping up a bird. That was easy.

DX: Because of your respect as a visual artist, has that made things easier for you musically?

Zelooperz: My respect as a musician has my art side popping. I say that because, it gives people an avenue to go along with. Like, some people don’t know that I do music still and I’ve been making art for two years straight after I dropped my last album, so they think I’m still a visual artist. Some people feel that I’m just a rapper who paints really well and they were buying into it. So I say music helped my art get out there more. It helps each other now because it’s at the same level as far as respect and recognition.

DX: I know Danny has been working on a project as well. Have you had a chance to hear it?

Zelooperz: With this project that I have, I didn’t get a feature from Danny this time. I was just on his last album and I was on his last album. We didn’t want to oversaturate our collaborations, but I have had a chance to listen to the album numerous times and it’s very phenomenal. The songs are going to catch everyone off guard. I’m saying this is because it’s Danny fuckin’ Brown. You know Danny is going to catch you off guard, but you don’t know what you’re getting yourself into. This new shit is fuckin’ nuts. The beats on this shit are fuckin’ nuts. It’s like fuckin the purest dope, people can’t handle that shit. You can sniff the little lactose, but what you’re about to sniff, you’re going to be high forever. It’s a classic. I haven’t had a chance to work with him yet in terms of laying down verses, but being around it and hearing it, it’s so amazing. I got some favorite tracks on it already.

DX: Considering this is your first time performing at Ham On Everything, which is known for being some of the wildest party experiences in L.A., any crazy moments you’ve can recall while you’ve been out here?

Zelooperz: Skyler is laughing because the last time I was out here, I bought some Bernhard Willhelm sandals. I bought these sandals for like $200. I forgot where I bought them from, but we was on tour. I think I got them in New York. I wore them bitches while on tour and people were asking me why I was wearing them. That night, I was in L.A. running down the street in them. I was gone that night off of Hennessy and a few beers. I know when I got on the bus, A-Trak and Trash Talk were looking at me crazy. It was my first time in L.A. Gary was trying to fade somebody because I was trying to get into a party and people were talking crazy to me. They knew I was fucked up so they were fucking with me. Trash Talk, Skywalker and a few others, ganged up on dude. That’s when I knew they had my back. My first time out here was so lit.

Bothic can be streamed in full below and will be available on iTunes via Bruiser Brigade Records.