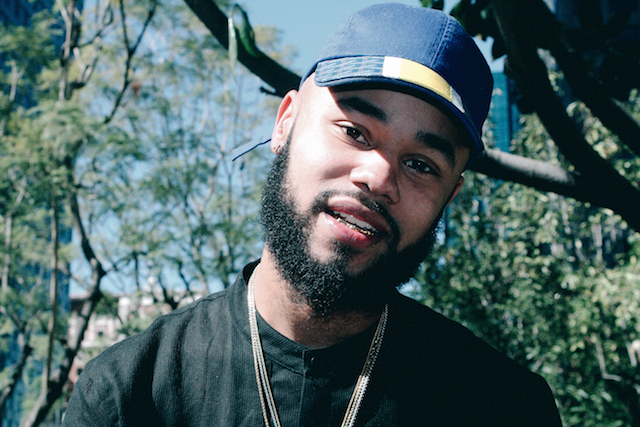 Happy Belated was a dark and dreadful release of emotions from DMV native Chaz French. Around that time, he’d just emerged from homelessness and the recent birth of his daughter. From describing his own personal struggles on “Whatcha Know” to the extremely aggressive “Came Down,” the 2014 release caught some real attention. French along with close associate GoldLink are later being called next the region’s future. While many artists coming from depressing past attempt to carry those same feelings despite the success around them artificially, These Things Take Time was a lot lighter in mood when it dropped at the close of 2015. Getting attention from the likes of Pusha T and Rick Rubin doesn’t hurt either.

Getting some time with Chaz French, his relationship with GoldLink, where These Things Take Time has taken him and thoughts on the upcoming elections are discussed in this exclusive.

HipHopDX: One of my favorite verses from you last year was of Falcon’s “Aquafina” along with your fellow DMV brethren Goldlink. How far back does your relationship go with him?

Chaz French: We’ve been cool ever since we both started this shit. We both dropped our projects around the same time. Just to watch him grow and be around that is dope. He’s like my homie or my best friend.

DX: It seems as if the rap scene out there is bubbling at the moment.

Chaz French: It’s tight. We’re really making a stamp and name out there for ourselves. We’re building up the area. It’s going to be on the level of like L.A. and New York sooner or later. It’s fun to watch everybody come up and have their own little wave. Everybody’s come up is different. To watch everyone from the area is good.

DX: These Things Take Time dropped at the end of last year and furthered your buzz coming after Happy Belated. What’s been the response from your point of view so far?

Chaz French: It’s dope. It’s tight. The way the fans and anyone who heard it is the same way I felt. That’s always a good feeling. I was happier than this time around than Happy Belated. I was in a happier space. To see my fan base grow is always exciting. That’s all I want to do is touch people. And, not in a weird way. [Laughs] I want to do that through music because I know there are people out there that need to hear my music who are going through what I went through. Just the more the better. You recognize it through growing followers, people recognizing you. When people tweet me and direct message me daily. It’s getting there. Every day is something new. Whether it’s someone who comes to you and asks if it’s you or someone sends you a message telling you how they avoided suicide because of your music. Hell, I woke up in Wale’s crib today.

DX: You really woke up in Wale’s crib today?

Chaz French: Yeah! Who wouldn’t think that’s cool. That’s cool to me. Two years ago, muthafuckas didn’t know who I was.

Eventually Stepping Into Production & Being A Fan Of Anderson .Paak

Chaz French: Exactly, I was in a different mindset. I had a lot less to worry about. With every situation, you’re going to have some kind of struggle regardless. That’s why I kept the whole struggle because it’s what makes you. Struggles are a part of life. My struggles were different. I’m not homeless anymore. I can eat. I had a place to stay. My mom was happy and my kids were happy. It was definitely easier this time around, but I worked ten times harder. These Things Take Time was a bigger sound. People didn’t know I could make something to this type of beat or make sounds that are brighter. I really was hands on with it. Makes me want to learn how to actually produce my own music just being around producers of that caliber. They make it look easy.

DX: You even had your mom on the project as well. Where did that idea come from?

Chaz French: It’s just life. That’s everyday life. She calls me, she texts me every day till this day. She gives me words of wisdom to keep me going and stay rooted and grounded. It’s about staying true to who you are and keeping God first. It was only right.

DX: And to think, a few years ago you were homeless. How does it feel to go from that to frequent visits to L.A.?

Chaz French: Nothing man. I never take it for granted. I’m forever appreciative of that. I never want to go back to that lifestyle. It’s always overwhelming sometimes to be able to open the refrigerator and get something to drink. You’d be surprised how much that means to a homeless muthafucka. Being out here, you never know who you’re going to run into out here or see. I know people tired of hearing it but going to Rick Rubin’s house. That’s probably been the coolest shit ever.

DX: That was a huge look. Anything happen during that conversation?

Chaz French: You know, Rick doesn’t say too much. It’s just his energy. He doesn’t say much at all, but he heard some of These Things Take Time before we dropped it. He told me it was amazing and to keep going.

DX: You’ve been recording new music out here as well.

Chaz French: Recording is energy. I can hear a beat last month and say I don’t fuck with it. I can hear it tomorrow and make a dope record. I can go into the studio and do nothing because I’m not feeling it and come back three days later to pump out five quality records. It depends on how I feel that day. I’ve been getting back to writing. For These Things Take Time, I didn’t write, but it came out just as if I would have wrote it. You think about it more when you write. It’s more of a well thought out process. If a person writes out their goals for the month. It’s easier because you’re reading and backtracking on it.

DX: Anything been catching your ear lately?

Chaz French: That Anderson .Paak album is nice. Been trying to get a feel of Kanye’s album. I listen to the stuff that’s out, the trending stuff. You have to hear it or at least always are going to hear it.

DX: Touring life is about to ramp up as well.

Chaz French: Yes, more touring and more music. I want to tour as much as I can. I want to get out here and actually let the people see the performances so they can feel the music even more. Just staying on the road and staying busy. Tour life is fun but tiring and exhausting. This is like my first tour being gone for like more than five cities and shit. It definitely takes its toll on you. Seeing something new every day and different fan base every day is dope. Atlanta was turnt. Can’t say too much about that. They have a hippie crowd there so it was dope. I didn’t expect that.

DX: Seeing you’re from the DMV, any thoughts on the upcoming elections?

Chaz French: Naw man, I can’t touch on politics. I am going to vote for Bernie Sanders.

DX: The economy is one of the biggest issues of today and half a million citizens in America are homeless. Considering you are very outspoken about your times being homeless, any thoughts on that issue.

Chaz French: It’s bullshit. I think we can help out more. We can definitely build more shelters at least. It’s tough to see that. I give homeless people a lot of money. When’s the next time they’re going to get it? I can make five dollars from doing a feature. I’ll get that money back from doing what I love. Me, I was homeless by choice. Then, some people are really put in a fucked up situation where they can’t help it. They don’t have anyone to turn to or nothing to go to. So, why wouldn’t you not want to help a person like that who has nothing. That day when I’m like ballin’ with big money, that’s what I’m going to do, literally. That person that can’t eat every day or doesn’t have a jacket. All that money that they put into bullshit and they can’t give money for jackets, a place to stay for a night and a job application? That’s just me.