Lil' Flip: U Gotta Feel Me 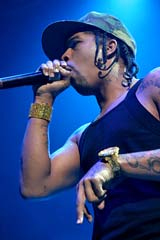 With his own hit, “Game Over” and cameos on Beyonce’s “Naughty Girl” and J-Kwon’s “Tipsy” remixes, u gotta feel him.

He’s the cameo King: Beyonce‘s “Naughty Girl” and J-Kwon‘s “Tipsy” remixes, David Banner‘s “Like A Pimp,” Three 6 Mafia‘s “Ridin’ Spinners” & more. And now everybody’s yelling his name on his latest hit, “Game Over.” HHDX sat down with Lil’ Flip at the W Hotel on Union Square in Manhattan to rap about his new album, U Gotta Feel Me, the reason he’s Sucka Free and what his huge, new diamond-encrusted Clover G Records neck chain stands for. Flip, Flip, Flip!

Talk about your new album, U Gotta Feel Me.

This album is a little bit different from the last one. I put a lot more energy into it. I made more tracks where the crowd can participate. What people don’t understand is not every track you record is going to be a track you can perform. So I got a lot of tracks I can perform at my shows. I got Ludacris on the album. I got a track with Cam’ron. Of course, David Banner, Three 6 Mafia. It’s just a big step from the last album. I went out and found some more hungry cats. Every album I do, I try to find some cats without a deal, without a name and do some work with them. So I let some hungry cats produce half of my album. I got two Red Spyder tracks, a Neptunes track, Heatmakerz, ya know.

Did the Neptunes send you a Southern-style track?

It’s like a smokin’, laid-back track. Down-South. My flavor.

You recently went through some label drama with your own indie Sucka Free. Well, I was told I owned the company and when I looked at the paperwork my name wasn’t on there. And show money discrepancies were comin’ about. So I decided to form my own label, that way I could know everything’s that’s going on. I can be involved with everything. Because I was just doing the rap. Just making sure the album’s right. I draw all the covers, everything. Now I handle everything. I just co-directed my video with Benny Boom. The “Game Over” video at all-star weekend.

What’s the video about?

I was really talking about the rap game. I didn’t want it to be a kiddie game video. I take themes from movies. When I did “The Way We Ball” I took the theme from Brewster’s Million. I had to spend a million dollars in one day. And this one is the theme from Blow, Where they weigh the money up on the scale, and I’m walking through the crowd and everywhere I go they want Flip. The women are dancing with different men and going in their pockets, stealing money and jewelry and when I walk through the club they hand it to Flip.

What’s the name of your new label?

Was it an emotional split with Sucka Free?

Yeah, my partner was friends with my dad and so I put a lot of trust in him and I expected more. Out of all the people I knew I didn’t figure him to do something like taking money and stuff like that. But you learn. That makes me know that you gotta back track everything. If a person tells you something, you can’t believe everything a person says. You gotta go see for yourself.

You’ve been in the game a while. What other lessons have you learned? You just gotta represent you. Can’t nobody represent you like you. And if you’re in the presence to talk for yourself, that’s the best thing. Cause you gotta a lot of cats get lazy and don’t want to do this, and they think it’s cool to have all kind of managers. I like to handle everything on my own. That way there won’t be any mix-ups.

Did your popularity grow after being featured on David Banner’s “Like A Pimp?” Yeah, cause when we did the track I didn