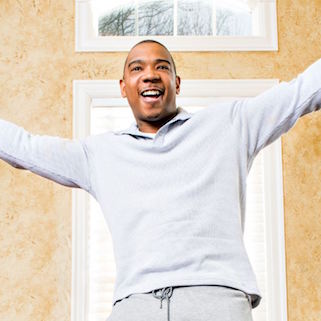 There was a moment in time where Irv Gotti’s Murder Inc felt unstoppable as Ja Rule and Ashanti nearly ran urban radio. Following a federal investigation and on-going beef with 50 Cent, the road to career recovery has been hard fought for Mr. Jeffrey Atkins. Things didn’t get any better after serving time in prison for gun possession along with additional time for tax evasion. Those years were dark for the Pain Is Love emcee.

Holding Ja down throughout that turbulent time was his family. Years removed from various controversies, viewers can finally get an intimate look into his household through MTV reality television series Follow The Rules. While many rappers his age struggle with appealing to a younger audience, Ja finds himself very comfortable being a husband to his wife Aisha along with three kids Brittany, Jeffrey Jr. and Jordan. Despite his past within Hip Hop’s eye, his persona has matured into a television dad on par with emcees taking the similar reality route including T.I. and Reverend Run. Speaking with DX, the man who helped give the world “Holla Holla” and “New York” discusses Follow The Rules and upcoming Genius Loves Company album.

DX: I’m a fan of the show. Follow The Rules really has you and your family in the spotlight. Was it difficult building the confidence to really expose that part of yourself on the show?

Ja Rule: It’s cool man. So far, so good. I’m enjoying it and the family is enjoying it. I don’t think you hear too many people say that about doing these types of shows. It’s never really a lot of positives energy, but my show is a lot of fun and a lot of positive energy.

DX: As a kid, I never thought about Ja Rule the father and husband. How do the two co-exist?

Ja Rule: At the end of the day, I’m the same person. When I’m out and about, people see me as Ja Rule but, under those layers, I’m Jeffrey Atkins. I guess it goes both ways. When my kids see their dad, underneath that layer is Ja Rule. It’s really not two people but one person. You just get to see different sides of me.

DX: That episode with the Snake Juice was hilarious. I’ve noticed on Twitter, people have been comparing you to Uncle Phil from The Fresh Prince Of Bel-Air? Interesting comparison right?

Ja Rule: I had to laugh at myself for that one. That’s funny. Listen, Uncle Phil was America’s favorite dad for a lot of years after Bill Cosby. If that’s what they’re implying as in Ja Rule is America’s new favorite dad, then I’ll take it.

DX: Interestingly enough, I remember T.I. getting those Cosby comparisons around the earlier seasons of T.I. & Tiny: The Family Hustle. Do you see yourself as America’s new favorite dad? The way you interact with your kids seems very today.

Ja Rule: You know I’m a different type of dad and different type of parent. I’m the new parent. I am the wave parent. This is how we parent and talk to our kids. We curse. People who see it first hand be like, “Wow, this is how black families talk to kids?” As people started watching the show, that’s what I’m getting. A lot of people are relating to how I talk and interact with my kids. I try to keep it honest and as real as possible when it comes to stuff like that.

DX: You’re also coming from a big tour with Ashanti as well.

Ja Rule: One of the things that people don’t know about Ja is that I’m constantly touring. I tour all year round. I’m on the road all year. Me being on the road and getting back out there with Ashanti, we do that. We stay out on the road. You may not see us as much, but that’s because we do a lot of overseas shows. I live on the road man.

DX: Now that you have the show on MTV, what’s the plan in using the momentum for a new project?

Ja Rule: I haven’t felt like this in a long time. My creative juices are flowing and I’m having a lot of fun making these new records. Playing with new sounds and new flows. It’s just a lot of fun right now. I’m happy in this space I’m in at the moment musically because there’s no pressure. If I want to make this album and put it out for free, I can do that. That’s what I like about the music right now. It’s not like I’m doing it because I need a check or anything like that. I’m just making music because that’s what I love to do. It’s therapeutic for me. That’s my passion and it’s fun.

DX: Considering you’re from Queens, any thoughts on where New York Hip Hop is now regarding its more Southern influence?

Ja Rule: Hip Hop is Hip Hop. It changes every few years. You’re going to get that from Hip Hop. It’s always going to be a youthful-driven movement when you talk about music. It’s no different right now. Kids bruh. Kanye couldn’t have said it any better. A lot of people looked at him like, “what are you talking about?” However, he knows exactly what he’s talking about. The kids are what’s up. They know exactly what’s fresh, new and hip. You have to listen to the kids bro.

DX: Even from the kid’s perspective. Learn anything from your own?

Ja Rule: I listen to a lot of the new stuff that’s out there. You have to keep your ear to the streets, especially when it comes to music. I’m aware of what’s going on out there with the new sounds; drill music or trap music. You have to keep your ears to the streets with that type of stuff so you can go in there and make the best project. I listen to my kids all the time. They keep me abreast to what’s going on. Dad can be busy so he can’t always be worried what’s the new and hot thing out. They keep me abreast to all of that.

DX: 2015 has been a pretty eventful year within Hip Hop from albums to news and controversies. Anything you’ve been listening to recently?

Ja Wishes 50 Cent “Good Luck” As He Files For Bankruptcy

DX: That line between R&B and Hip Hop is something you’ve played with since the beginning of your career. How do you feel about that today with everything being so blurred?

Ja Rule: I think it’s real dope. I love listening to the guys with the melodic flows. You really can’t distingue who’s who anymore. I honestly don’t know if Bryson Tiller is an R&B artist or a rapper. The lines are blurred as you said, but I think that’s dope. I think we should be labeled as musicians.

DX: When should we expect some new material from you or the Genius Loves Company album? Working with anyone?

Ja Rule: Yeah, I’m working on it now. Next year, I’m going to put it out. I’m keeping that under wraps right now. The title should be an indication of what I have in store.

DX: Where will the album evolve from Pain Is Love 2?

Ja Rule: Well, my albums are reflections of things I’m going through. Pain Is Love 2 was a reflection of what I was going through, in that moment, as I was about to go to prison. You hear that in those records. It was about me going in and letting the world know that they could trap my body but not my mind. That’s what I was dealing with at the moment. All my albums are like that. You get a good glimpse into my life. It’s a good bird’s eye view of what I’m going through.

DX: Nowadays, artists are coming out with several projects in one year. Has that become a problem for you compared to the time of your debut Venni Vetti Vecci released over a decade ago?

DX: Social media seems to be the cause of various beefs. Where do you stand?

Ja Rule: Social media is the gift and the curse. It’s angels and demons. You can take it however you want. I think it’s been good for a lot of people that don’t have a voice. But, I think it gives a voice to people who should never talk.

Ja Rule: For Hip Hop, it’s different from R&B. When you have someone writing your music and you’re an R&B singer, that’s fine because you’re talent is in your voice. Using your voice is your God given talent. As an emcee or Hip Hop artists, our pen is our talent. Being able to put those words and delivery together is the challenge. If you have ghostwriters, it doesn’t make sense. It takes away from what we do as artists.

DX: Last question. Any thoughts on 50 Cent filing for bankruptcy?

Ja Rule: I don’t care about that man. Good luck to that man. I hope he finds himself in a situation where he feels more comfortable. I don’t really give a fuck. Honestly, I don’t. I can care less yo.