While incarcerated at California State Prison, Cochran in the early 1990s, Joe Cool says he sent his sister a drawing of their cousin, Snoop Dogg. When Snoop Dogg was visiting his sister one day, Joe Cool happened to get on the phone with Snoop Dogg.

This was before the then-Snoop Doggy Dogg was introduced via the 1992 song “Deep Cover.” Joe Cool says he still scoffed at Snoop’s statements, but that he started to believe Snoop a bit more when he played him an early version of “Nuthin’ But A ‘G’ Thang” over the phone.

Joe Cool Says Snoop Dogg Urged Him To Get Off Drugs

Joe Cool was released from prison in 1992 and happened to be walking down the street in Long Beach when he met up with Snoop Dogg and Warren G. But Joe Cool, who was a crack addict, was high on sherm at the time.

Joe Cool violated his parole and was incarcerated again, but he was released while “Deep Cover” was becoming one of 1992’s biggest rap songs. Joe Cool and Snoop Dogg saw each other soon thereafter.

“Snoop came to me and he told me, ‘I want you to draw my cover, man,’” Joe Cool says. “I said, ‘You serious?’ He said, ‘Yeah. We gonna pay you, gonna give you some money.’ He gave me the idea.  He said, ‘Well Dr. Dre really wants a picture of me on top of a doghouse, reaching over, feeling on a dog’s ass or something. But I want you to draw it, though. We’ll run it by Dre.’ Dre said, ‘Alright. Go ahead.'”

Joe Cool says he had his then-girlfriend Carla pose on his mother’s couch, which is what the doghouse and the female dog entering it on the cover are based on. He added his own sense of humor to the captions.

“I didn’t think it would be iconic, man,” says Joe Cool, who signs his art as “Joe Cizzool.” “And then when it sold as many as it sold, and I seen my shit up there, it just gave me…like damn. I can’t believe it. My artwork is out there, ’cause Snoop let it come. He gave me the opportunity, man. He got me a little bit of 15 minutes of fame up in the world. It’s been 20 years, man. He gave me that opportunity. Man I love him for it.”

When the album cover art became the source of controversy, Snoop Dogg shouted his cousin out during an interview on “The Arsenio Hall Show.”

“Arsenio said, ‘Who drew this?’” Joe Cool says. “And Snoop said, ‘My cousin Joe Cool did that.’ When he said that, I almost passed out. I was there with him when he did the interview. I was there with him. I’m like, ‘Oh wow.’ Everybody was clapping and shit. ‘Woo woo,’ all that, like damn. They clapping ‘cause I drew this shit. He said, ‘My cousin drew that, you know, my cousin Darryl “Joe Cool.”‘’ I’m like, ‘Wow. He said my name to Arsenio.’”

“If you look at the album cover, everybody sued us and said it was degrading women,” Knight says. “But even the guys who did the artwork, who wrote songs, who participated in videos, they were guys who were either wearing red or wearing blue. . . and it was a situation where they all got along. We’d go places and you might see twenty blue rags and twenty red rags. And that was never before seen.” 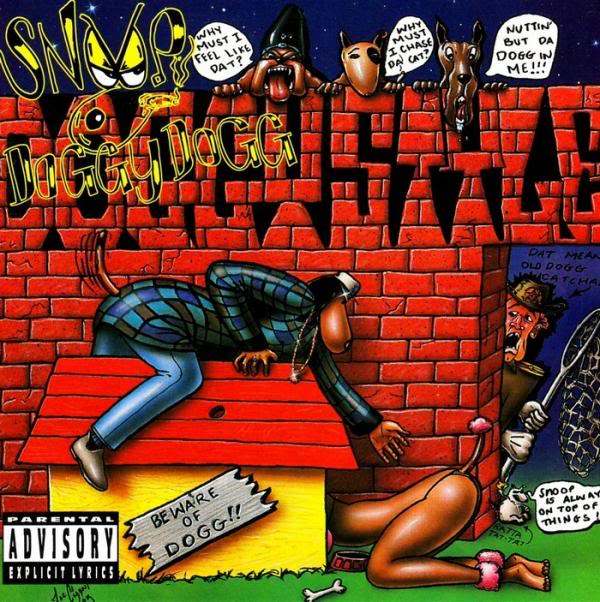 Joe Cool Helps On Snoop Dogg’s “Murder Was The Case”

“It was fun doing that,” Joe Cool says. “I was there for the whole making of that album. I watched Dr. Dre bring the musicians up in there to blow horns, and I watched him work these keyboards. And I also watched my little cousin Daz, Daz is our other first cousin, I watched Daz stand behind Dr. Dre, taking notes and getting in his way. He’s like, ‘Man, will you back your ass up?’ That’s how Daz learned. Daz learned how to do his shit hands-on. You know like when the Dogg Food came, Tha Dogg Pound album? Daz learned all that shit from Dr. Dre. He already had musical skill as a gift from his mama, but the shit that he learned, he learned from Dre by looking, leaning over Dr. Dre’s shoulder.”

Today, Joe Cool tours as a hype man with Snoop Dogg and continues working with him as an artist, among other things. He has also been sober since September 28, 2003.

It’s been a remarkable journey since Snoop Dogg told Joe Cool that he was working with Dr. Dre more than 20 years ago. “Lucky for me, I was always nice to Snoop,” Joe Cool says. “I was always cool with him, ‘cause I love him. He was always like a little brother.

“Whenever I leave this earth, that right there is my legacy, man,” Joe Cool continues. “It’sDoggystyle, ‘cause Snoop gave me that opportunity, man. He didn’t have to. He could have went with that picture, man. But he said, ‘I want my cousin to draw this.””