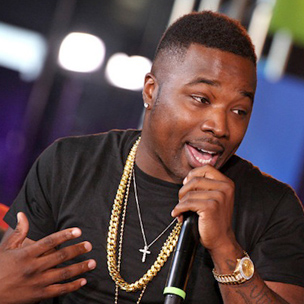 For the last decade or so, many Hip Hop fans (mostly New Yorkers) have been on a campaign to “Bring New York Back.” Arguably, the Big Apple hasn’t produced a Hip Hop mega star since 50 Cent, and newer artists like A$AP Rocky, while talented, have also been criticized for not adopting a sound more representative of New York’s Golden Era. Then there’s Troy Ave.

The Brooklyn rapper is serious about bringing his city back to its former glory days, even titling his debut album New York City: The Album. The project, which dropped last year and peaked at #47 on Billboard magazine’s Top R&B/Hip Hop chart, was complete with all the stuff New York Rap is made of: bravado lyrics, clever wordplay and street cinema, all served over some pretty tough beats.

While Troy Ave, whose moniker is a busy street in his Brooklyn neighborhood, has been in the game for a while, his buzz is at an all-time high, his career at the tipping point. With co-signs from artists like Fabolous and Pusha T, the cocky emcee recently hit Hot 97’s Summer Jam stage with his BSB crew, graced this year’s XXL Freshman cover and is set to become the face of an upcoming Sean Jean clothing campaign. While he brags about things like this and more, he still manages to remain humble, often reminding us of where he’s headed and yet thanking us for allowing him to go there. The answer to New York’s problem could very well be Troy Ave. But the real issue, the big question, remains: Does Hip Hop want the return of New York? Time will tell.

During a sit down with the Powder Boy at Cipha Sounds’ Hop Hop Improv Show in Lower Manhattan Troy discussed comparisons to 50 Cent and what it would take for him to sign with a major label.

HipHopDX: You talk a lot about bringing New York back. Where was it before?

Troy Ave: It wasn’t respected as the best. It wasn’t like it was in its heyday. Niggas ain’t look up to real niggas coming in the game like with Biggie and Jay. They were instantly respected. They were bringing it.

DX: A lot of people compare you to 50. What do you think about that? Is he one of your idols?

Troy Ave: I don’t have any idols. He definitely was an influence of mine; I’m from New York, and New York niggas should be influenced by other successful New York niggas. I think it’s incredible that they compare me to 50 cause he’s incredible. He came through, repped for the city, blew it up and made millions. So if they’re comparing me to him, that’s a good thing.

DX: You were on BET back in 2006. That’s eight years ago—almost a decade. Why didn’t you give up?

Troy Ave: I didn’t give up. I took a break. When I first started rapping, when I was on BET back then, I had money from another type of way. And it was costing me money to try to pursue my Rap career. So that’s why the music that you’re hearing is different from when I first started. I took a break and then I started getting into the hustling thing. Then I came back with “I’m In Traffic” in ’09.

DX: You’re still independent. What would it take for a label to sign you? I heard you say something like over $1 million.

Troy Ave: I don’t even need any label money. I’m straight. I want to do a group thing…a business partnership where they give me a million in marketing and promotion. I need to put my music in stores across the world, and I need the biggest promotion that’s ever been done in a decade for an artist in New York. I’m from the biggest city, so we need that. My music is like heroine, it’s one of the most addicting drugs. When someone hears it, they love it.

DX: You don’t seem like a Brooklyn dude. You have a smooth thing going, almost like a Harem Mase thing.

Troy Ave: Nah, hell no. I’m a Brooklyn nigga. Ask anyone from Brooklyn about Troy Ave, I’m on some Brooklyn shit.

DX: What was your reaction to making the Billboard charts?

Troy Ave: I was like, “Oh shit, that’s ill.” That was the first album we sold. I thought I was gonna sell a couple hundred copies and get like 100,000 downloads. So to come in at #47 on Billboard was ill. I sold 3,000 records in 12 hours, and after that it was free. I gave the shit away for free. I was proud of myself and my team.

DX: Back in September you told the Breakfast Club that you were spending more money than you were making. Is that still true?

Troy Ave: Nah, it might be balancing out now. I still got more money spent, but now it’s not like I’m spending $10,000 a month but only making $8,000.  I’m making more than I’m spending. I invest in myself. I ain’t catch up to what I spend yet. This Rap shit really starting to work for a nigga. It’s working out.