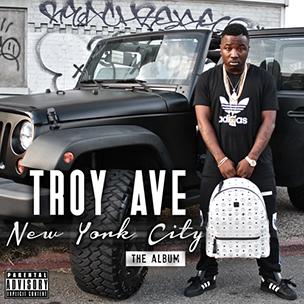 It seems now more than ever, the existence and relevance of New York Rap bearing a New York influence is in question. With New York City: The Album, Troy Ave seeks to answer the questions. Aptly titled, the project is a celebration of all things New York, from early new millennial New York emcees, to the newly Brooklyn-housed Nets, New York City: The Album embodies the Big Apple. Without feeling forced, Troy Ave has created an album that is sure to give New Yorkers something to be proud of, and those outside of the five boroughs something resembling the music they most likely also loved from the NYC.

While a lot of the production on the album resembles that of early ‘90s New York Hip Hop, Troy Ave himself is sure to remind listeners more of the artist who was running the Rap game when Troy was in his teens—50 Cent. “Show Me Love” finds Troy Ave almost recreating “In Da Club.” While the hook bares a strong resemblance to the hit that helped break the G-Unit general, paying more homage to the G-Unit regime, Ave enlists Tony Yayo to feature.

Like 50, Troy Ave isn’t the most complex when it comes to lyrics. However, unlike many emcees who combine unrelated punch lines back to back, Ave often avoids one-liners. On “Cigar Smoke,” he raps the following:

“Bird ass niggas, there’s no relation / I cannot consider you real if you ever was hating…unless your team was playing / You might call Lebron a bum, but you ain’t really mean it / You just must mad he dropped on Brooklyn, I seen it / And felt the same way, once I got up out my feelings / Still had to sling yay, them suites ain’t cheap / Win or lose still struggle / Mickey Mantle don’t love you / So I fishtailed out to Bronx, with fishscale from my hustle…”

How Troy Ave concludes “Cigar Smoke” is a representation of what he appears to be attempting to get across the whole album, by rhyming, “I only drink Cristal, or Imperial Moet / No more weak ass Rose, that’s why the game too sweet / We don’t wear tight ass clothes, we don’t do down South beats / That ain’t New York, I restore our identification / ‘Cause dick riding never been a form of transportation…”

The features on New York City are limited, and handled properly. Outside of Troy’s BSB affiliates (which only appear twice), of the 17 tracks on the project, only three contain features; the aforementioned “Show Me Love” with Tony Yayo, “Everything” featuring Pusha T, and the single “New York City” which features Empire State contributors, Raekwon, N.O.R.E. and Prodigy. This gives listeners unfamiliar with Troy’s “Bricks In My Backpack” series a chance to get acclimated to the young up-and-comer.

Not too far removed from the people on the avenue, “Me Against The World” finds Troy speaking of the struggle to succeed and chasing dreams. “Mama Tears” and “Beneath Me” find the BK street emcee flexing his storytelling chops. While you won’t find any love stories on New York City (“Regretful” is the exact opposite) Troy Ave shows his versatility across the project. Never straying too far from his wheelhouse however, he does so without coming off formulaic, which is an issue several artists have ran into while attempting to do something for everyone.

New York City: The Album is not just good New York, street Hip Hop album…it’s a good Hip Hop album. While the streets of New York are sure celebrate the project, it is also likely to convert Hip Hop heads from other regions into fans of the self-proclaimed “Harry Powder.” Troy Ave’s wittiness and overall personality are on full display across the project, and while not lyrically a titan, he’s not to be disrespected when it comes to bars either. Those who are for one reason or another puzzled as to what happened to the New York Hip Hop they used to love need look no further than Troy Ave.