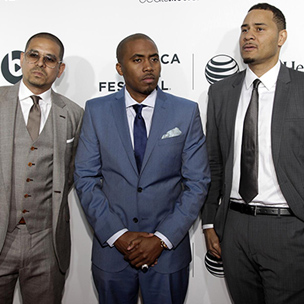 Erik Parker & One9 Chronicle Documenting Nas With "Time Is Illmatic"

During Coachella’s first weekend, Nas and Hennessy V.S hosted an intimate brunch at the Ingleside Inn in Palm Springs, California to celebrate the 20th anniversary of Nas’ critically acclaimed debut album, Illmatic. At the poolside party, a guest-list of celebs, models, actors, and journalists were shown an exclusive preview of the rapper’s new documentary Time Is Illmatic. HipHopDX caught up with its producers, writer/producer, Erik Parker and visual artist, One 9 of Illa Films to talk about the making of the film.

A graduate of Columbia School of Journalism, Parker served as music editor for Vibe and The Source magazines, and has written for publications such as XXL, Rolling Stone, and Village Voice. One9 is an award winning multimedia artist, producer, and editor. He’s done work for Google, Sony Music, and the Barclays Center in Brooklyn, New York.

Though Time is Illmatic delves into the making of Nas’ 1994 groundbreaking album, most of the documentary traces experiences outside of the studio that affected the music being made within it. The film talks about social conditions and environmental influences that fueled its creation, like public school education, project housing, the crack epidemic of the 1980s, and the subsequent “War on Drugs.” Interviews with Nas’ Blues musician father, Olu Dara, his brother Jabari, and emcee/producer Q-Tip gives fans a look at what fueled the intricate wordsmith to continuously innovate and bring the story of Queensbridge to the world’s stage. The documentary premiered Wednesday, April 16 in New York at Tribeca Film Festival.

One9 & Erik Parker Describe Their First Impressions Of “Illmatic”

HipHopDX: Describe the time where you first heard Illmatic

Erik Parker: I don’t remember when I very first heard it, but I remember the impact of it. It was already around everywhere, because it got bootlegged early on. There was this whole pre-release atmosphere around it. The music was by some of the greatest producers at the time. As a writer, I listen to the words, and it was poetry I never heard in Hip Hop before. The feeling, the emotion, and the world he was describing with that poetry was something that was different and elevated from anything else in Hip Hop, or any other music that I’ve heard.

DX: What impact do you think it had on Hip Hop at the time?

Erik Parker: Well, if you go back to Hip Hop in the 1980s, Hip Hop was really about self-validation. A lot of people in it were refuting the critics who said Rap was not music. They wrote it off as a generational shift where these artists are just making noise. Nas came up in that time, but by the time Illmatic came out, Hip Hop had been validated commercially and as an art form, so critics had already started coming around. So Nas didn’t validate Hip Hop, but if you listen to Illmatic, it validated a people. If you listen to the music and the poetry, he was speaking about Queensbridge and people like that around the world. He validated them, because it put them on a higher level of poetry. What it said was, “There’s art to this. There’s compassion; there’s a whole world you may not understand.” I think Illmatic shifted the conversation from, “Let the mainstream music community understand us as rappers” to, “Let the world understand us as people.”

DX: So how did everything come together with Time Is Illmatic?

One9: Well initially, Erik was the music editor at Vibe. As an artist, I was painting a lot and using iconography to tell stories. He was doing a 10-year anniversary piece on Illmatic, and he realized it needed a bigger platform. It needed the in-depth stories that a documentary could tell…

Erik Parker: It needed One9 [laughs]…so I got in touch with him and said, “Let’s get together so we can tell a bigger story.” One9 is a very advanced, visual storyteller, and I come from a journalistic background, and knew the story we could create. So we got together with a group of friends, put together whatever money we could, got whatever cameras we could find, and just started shooting whenever we had the time. We developed the story together and started seeing something bigger.

One9: Yeah, we just meshed the two worlds together. I can do it visually, and Erik can do it through the written word, so we were able to use both of our backgrounds and expertise to really connect and make a compelling documentary. It has integrity, honesty, grit, and it takes risks.

DX: When you were making the documentary, was there anything that surprised you about Nas, the making of the album or his upbringing?

One9: I wouldn’t say anything surprised me, but it was enlightening to see what his early life was like. One thing that was really compelling was the books he reading, provided by his father. He was also a visual artist, and he drew a lot. We talked to one of his early grade school teachers, and she talked about his ability to express his emotions visually. To see what he was inspired by at such an early age, it was fascinating to learn. I thought it was important to know, because it shows why he is who he is now. These are important things in his process of becoming a lyricist and a master storyteller.

DX: What will viewers take away from Time is Illmatic?

Erik Parker: If you can take anything away from our film, it has to deal with the legacy and the greater picture of the music and the art. For example, if you took Nas’ life story, it’s one of inspiration. At times there’s desperation, at times darkness, but there’s always that hope. That’s what Nas clings to in his life, and that was the underlying theme in Illmatic. But we want to make people understand that Illmatic wasn’t just about Nas, it was about the world of people that he represents. We wanted people to understand them just as much as we want to understand Nas.