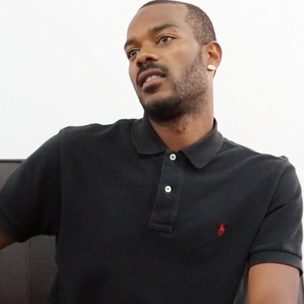 Mibbs has aspirations larger than just being a rapper. That’s not to say he’s outgrown Hip Hop, because he’s still has very strong feelings about both what fans should expect and the role of an artists in general.

“I just feel like music needs to appeal more to the emotionality more so than this fake shit that goes on,” he says. That emotionality is just one of many topics he tangentially addresses during a discussion that was initiated by talk of him releasing five EPs with five different producers. Mibbs is also amused while shooting down rumors of Pac Div’s split (“The chatter is cool,” he quips.) and somewhat nostalgic when discussing the crew’s early work with the likes of Blu, Dom Kennedy and Miguel.

But the here and now is still about those five EPs and the possible doors they may open. January brought The Program—a WoodysProduce-helmed project that follows last June’s FREEBASS EP with Scoop DeVille. Mibbs is also working on Made in the USA, which was co-created with a French producer and boasts what he calls a “worldly” sound. He’s seemingly all over the place because everything is a potential source of stimuli for his music, and his music is the platform that makes everything else possible in a very cyclical sort of way.

Mibbs Talks Drawing Inspiration For “Made in the USA”

HipHopDX: On “Crack” you said, “The Rap industry is ABC anyway / It don’t matter, I got ADD anyway.” Explain how you differentiate yourself in such a crowded market?

Mibbs: Man, I was talking to my dad earlier today about how I’ve been in Rap for so long. I’ve been a fan of it for so long, and you take a lot of stuff with you—stuff that you like and stuff that you don’t like. You’re pretty much inspired by everything, and to stay afloat in this industry, it’s a lot about… There’s a book out called Steal Like an Artist that talks about how everybody feeds off each other’s energy in this game. I’m not going to bite anybody, but I like to stay stuff I hear that I like and kind of implement it in my own way. I just really feel like paying attention to music and paying attention the type of things that I’m into is what keeps me going in it.

DX: When was the last time something kind of caught your ear like that?

Mibbs: To be honest, recently I liked A$AP Ferg’s “Work.” You know a song is dope when you’re in mid conversation, and soon as it comes in, you just stop what you’re talking about and you just keep going. That’s the beauty of music right there to me. I can honestly say that was like the last time I felt like that in Rap. I haven’t really been listening to a lot of Hip Hop lately, ‘cause I just want to stay in my own shit and keep getting inspired by other things.

DX: I heard that this was going to be one of five EPs with five different producers.

Mibbs: Yeah, I got the next one coming out the next one coming out called Made in the USA with this producer that a lot of people never heard of, and it’s cool; he’s from France. His sound is crazy, and he’s actually challenging me to become a lot better of a songwriter mixed in with the fact that he sees the rawness I can bring to the table. He’s pretty much just helping me get out of the normal, stereotypical Hip Hop sound; it’s more like a worldly sound I’m bringing. And it’s not like no Dance Dance Revolution shit; it’s not that. I’m not going to give you no David Guetta, but I’m going to open your ears up with a range of topics to just let people feel where I’m coming from individually.

DX: How did you connect with somebody from France?

Mibbs: Well through my girl, because she was doing some work with him. That’s how I’ve been meeting a lot of people lately—just going out and seeing what’s out there. Dude already knew about Pac Div and all that stuff, and he just took a liking to me. We got in the studio soon probably like a week after that, ‘cause I wanted to keep going, and I wanted to build on the conversation. And the first song I did was just so… man. I knew I had something with it.

DX: L.A. is so spread out, and you guys are kind of out there. How was it trying to create this community where people like you guys, Dom and everybody came together?

Mibbs: It really happened kind of naturally now that I think about it. We were living in Palmdale when we first started out, and we had MySpace, so it was easy to get close. It was easy to build a community: you start with your friends, they tell their friends, and then you go places and then you meet people. A lot of people don’t know we were kicking it with Dom [Kennedy] before I even knew Dom rapped, and we used to see each other everyday in the morning. We would smoke at the crib and stuff. Dom was at all the Church League Champions sessions—him and Blu…it’s crazy. Miguel was there and shit. It was like a real warming kind of organic environment where everyone just respected each other. Everyone was like, “Oh, it’s a new experience. Oh, they working at this big ass studio in Hollywood. We need to go meet up over here.” To see that, then take that energy and put it into your own shit; I think it was just a thing about the energy like how most of New York rappers back in the day knew each other. It just seemed more like genuine friendship, and it wasn’t a competition thing with us. We all learned to love each other, and it was pretty cool.

DX: What’s the future of Pac Div after you guys finish the solo stuff?

Mibbs: Man, I keep telling people, we’re still a crew. A lot of people are like, “Man, no more Pac Div, dog?” The chatter is cool, and I like to hear people. But whatever you want to say, or whatever you think, that’s my brother in the group, and BeYoung is pretty much like my brother. We have stuff recorded right now that no one has ever heard, but I wanted to focus on this, because I felt like I wanted to put a lot of pressure on myself. The self-accountability thing is something that I’m really into. I just wanted to be more self-accountable, and I wanted to have a career on my own where I could go into acting, ‘cause I can’t take both of them to a reading.

So we all have our different things. Like did the beats, and he got on Kendrick’s album [good kid, m.A.A.d city]. That’s good for him, and it does help the whole. But at the same time, it’s still like an implicit competition thing with each other. We got to keep each other going. It’s like basketball with us. You ain’t going to let him get 30 and you get like two. You might as well get 15 assists or something. And that’s how I feel.

DX: Between your solo work and the Pac Div stuff you managed to have a lot of fun while still conveying a message. With a line like, “Just another day as a young black male/ Tryna dodge the cemetery and over packed jail,” how do you balance that without being like a “conscious rapper?”

Mibbs: Everyone is going to throw you into a box for something, and everyone has an opinion. But I just feel like people mistake conscious with reality. To me, conscious is more like something esoteric like I’m trying to preach to you. But reality is shit that really happens, so I make the differentiation easily when I’m frustrated about something, happy about something, or when I’m in a limbo land stuck about something. I really feel like that’s the thing that makes people like music, because there’s something that relates, and I feel everything is all relative.

DX: You’ve talked before about how the FREEBASS EP with Scoop DeVille, and you described it as dark. Why?

Mibbs: With the energy behind it and the place I’ve been lately, it’s kind of funny. Say I blow up and get rich and shit. I’m going to still feel the same way I feel now, because that energy it took for me to go make it is something I always want to keep. I guess it’s like a hungry kind of feel to it. I’m a nice guy when people know me and shit, but there’s a lot of shit I don’t like, and that’s what the “Supwithat” song is about. I’ll say, “He’s a lame and you fuck with lames…” I’m not talking about a particular person at all, but a lot of my inspiration comes from like a superhero [perspective]. It’s like Batman or something, where you feel like you gotta stop some shit from going down, and you gotta help fix some shit. That’s the energy behind the FREEBASS EP, and you’ll hear it a lot more on the Made in the USA. You’ll hear it a lot more.

DX: Do you feel like we’re in a place now where music needs to get darker?

Mibbs: I just feel like music needs to appeal more to the emotionality more so than this fake shit that goes on. I’m going to just say it right now, and I don’t care if no one gets mad. All of the popular rappers right now are talking about molly, talking about fucking a gang of bitches, talking about fucking your girl and talking about all types of shit. Regular people do that shit, and that’s not new in the world. Yeah, I would hope that you got girls or whatever you like…or you got a bunch of dudes? I don’t know, shit. But my thing is, what about the real emotion? Sometimes you wake up pissed off; where does that come from?

That goes into a whole deeper conversation that I feel about mental health. That’s the problem with the world, and they keep blaming it on guns and shit. Naw it’s just people fucked up right now, and social networking is fake. What’s making people scared to see face to face and do business? I don’t want to go in on nobody, but you see people taking mad pictures, and you don’t know who the fuck they are. They just got they ass all in the picture and shit. Yeah the picture may look nice, but you don’t know that bitch. That’s how I feel. Music has strayed kind of away from the real emotionality, and it’s turned into more of this corporate thing. It’s like, “Let’s sell an idea more so than sell what’s really happening,” and that’s why Made in the USA is coming out.