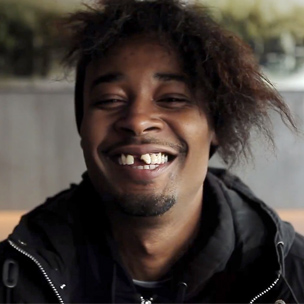 “I don’t really have a conscious thought and say, ‘Oh, maybe I shouldn’t say that,’” Danny Brown says while unfolding his 6’3” frame on a couch in the designated press area of Rock The Bells’ San Bernadino venue. So has he ever stopped himself in the middle of a thought that might be detrimental to his career?

“Maybe when I’m trying to get some pussy,” he says with the type of chuckle reserved for undercover playground or church shenanigans. “You think, ‘Damn, I need to fall back on calling her a bitch right now. I should just try to get the dussy and be nice with it.’”

“I remember one time dog, this fiend owed the boss / Put peanut butter on her pussy, let his pits lick it off…” –Danny Brown, “Torture.”

Of the dozens of Hip Hop artists that dropped projects on September 30, Danny Brown is the only one equally comfortable talking about the benefits of Mark McNairy fashion and canines performing cunilingus. On people. Blame his candor or the statute of limitations, but either way, Danny Brown is truly a hybrid. The references to crack, marijuana, ecstasy, MDMA and the people who sell them and use them aren’t some ploy to cash in on the tried and true formula of dopeman Rap executed by the likes of Jeezy, Gucci Mane and Jay Z.

“The richest niggas was always the wackest,” he says. “I feel like Master P was the one who changed it. It wasn’t about skill. It was about ‘I got money, so now you fuck with this cause I’m the richest nigga in the game.’”

The annual gloom and doom reports of declining physical album sales and increasing illegal downloads (and legal streaming services) mean the next Master P isn’t poised to whip up an RIAA certified platinum batch of “Ghetto D” anytime soon. So Brown has made his name off of an energetic live show, the aforementioned lack of filter and connecting with fans across all genres. And one would suspect, his genuine ability to speak a language familiar to both baseheads and hipsters is a major factor. Maybe that’s because hes served both groups both before.

Throughout the course of his interview, Brown draws parallels between being a signed artist and a dope dealer. Fans are “custos,” and his segment of paying consumers is treated like his block. As such, it doesn’t really matter if another [t]rapper comes along talking about rocks and Rick Owens.

“My dope is the most potent,” he offers. “I put it on the block, and it do what it do. They stand in front of the house a couple times and catch a couple sales. But when I put that stamp on the street, I got the fire pack, and don’t nobody else want your dope no more.”

“Poppin E pills like the old Slim Shady / ‘Cause everyday the sky’s grey like the hair on Grady / Play me your ass’ll fall off like McGrady / Call a hoe a bitch, and still treat her like a lady / Navy blue Ben Sherman’s tight on purpose / A lot of niggas hate it, but dog it ain’t worth it…” –Danny Brown, “Shotgun.”

Inevitably, things usually start and end with Brown’s appearance. He’s lanky, his hair is all over the place and a few of his front teeth are noticeable by their absence. The juxtaposition between his background—he’s a bit too exact and detailed about the innerworkings of the drug game to be lying—and the high end fashion and skinny jeans he wears is often a point of discussion.

His dad was a Detroit house deejay who put him up on Wu-Tang Clan and the flyest fashion. The influence is apparent today, as Brown can easily name-check James “J Dilla” Yancey—and not in the clichéd Wikipedia way some of Hip Hop’s cultural interlopers do so often. But he’s just as quick to cite Juan Atkins and DJ Assault—the self-proclaimed booty bass pioneer and architect of tracks like “Ass ‘N’ Titties.” It’s a local afternoon staple for those familiar with Detroit’s terrestrial radio of the non-Clear Channel and Emmis variety. And once rappers such as Kid Cudi began the trend of incorporating acts like MGMT and LCD Soundsystem into their music, Brown didn’t have to hop on the bandwagon, because he had already, literally been raised on similar material.

All of this helps perpetuate the story that Danny was born to be a rapper, and the multiple dead-end jobs and stints as a drug dealer were just detours. They would fit nicely into the dopeboy-turned-rapper archetype if it weren’t for the horrific stories about the pitbulls or crackheads nearly burning their faces off attempting to light glass crack pipes on stove tops. It’s hard to make that type of shit sound like it’s being glorified over a Trap beat.

Parts of Danny Brown’s bio easily comprise the type of material social workers talk about over beers when trying to forget what they’ve seen and heard for the last eight hours. While other parts make for they kind of “pull yourself up by the bootstraps” Hip Hop backstory that 8-Mile tried to sell to suburban teenagers. But the Greyhound trips to New York, bumming on friends’ couches and an eight-month stint for manufacturing and distributing marijuana that culminated in the creation of 2008’s Hot Soup are just as integral to the story as the pause tapes of “There’s Some Hoes In This House.”

All of which is to say, there wouldn’t be a “New Danny Brown” without the “Old Danny Brown.” Those that claim they really wanted the latter over the former should be forewarned that there’s no Golden Era romanticism in what Danny Brown is doing.

“I’m glad to be here now than in the ‘90s or the early 2000’s,” he says. “Now this mothafucka is like World War III. It’s just straight up superheroes on the turf, and you know it’s just about every man for himself. Ain’t nobody about to help you do shit. If you hot you hot, and it ain’t about no label saying you hot. Nigga, if you put a video up on the Internet, you can be the biggest thing tomorrow and have every label in the world chasing you…you know?”