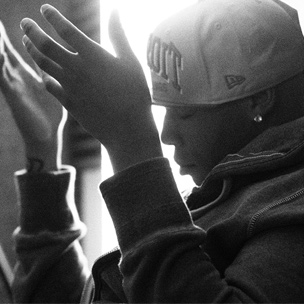 It’s pretty safe to say Earl Hayes believes in strength in numbers. While he doesn’t run with a crew per se, he turned quite a few heads in 2010 when it was announced that both Dr. Dre and Timbaland were working together on his album. In the three years since that announcement, Dr. Dre has given Kendrick Lamar his stamp of approval and continued raking in millions with his Beats audio brand. For his part, Timbaland has done some spot work, and exclusively handled production on this little Justin Timberlake album you may have heard of. It sold 968,000 copies within one week and continues to have a presence on the charts.

Some “creative differences” between Dre and Timbaland led to the end of Hayes’ relationship with Interscope. He still maintains productive but separate relationships with both Dre and Timbaland, and his ghostwriting gigs remain as lucrative as ever. Free from the constrains of the major label system, Hayes created another partnership with a childhood friend, and used the month of May to reintroduce himself to the Hip Hop audience.

“I’ve known Floyd [Mayweather] since I was a kid,” Hayes casually offered. “We been doing this for a long time. Like with the Filthy Rich records…he’s been in the wings the whole time with the whole Interscope deal and all that. He was there the whole Tim and Dre shit. Me, him, and 50 [Cent] cleared the situation before they fell out. He was there through all of that and he still there now. That’s my brother.”

Much like Tim and Dre, The Money Team saw a rift between 50 Cent and Mayweather. But, unlike the Interscope situation, a clash between label heads didn’t impact Hayes’ hustle. He’s wrapped up his “31 Days In May” viral campaign—an effort to show fans what made him such an in-demand ghostwriter. And now that fans have been reminded of who he is and what he does, Hayes looks to show and prove with the singles, “Images” and “On The Block,” before dropping an EP at the end of June.

Hayes Explains His “31 Days In May” Campaign

HipHopDX: What’s the main motivation behind starting this? It’s a lot of work to drop material everyday…

Hayes: I was thinking that “31 Days In May” could lead into this “On The Block” single after the “Images” song, which all ties into an EP I’m putting out at the end of June. The “Images” video will drop. We got some videos coming out this week. The “On The Block” and “All I Know” videos are all a part of one project with the EP that I’m dropping at the end of June. “31 Days of May” was to promote “Images” on iTunes.

DX: After listening to “Images” and the “31 Days In May” material and other projects, it sounds like you have a better command of your delivery and projecting your voice…how would you respond to that?

Hayes: I think time is growth. Time is definitely growth. With time everybody gets better at everything. I noticed that too.

DX: A lot of people are super secretive about their writing process and how they record…what allows you to be so open and show people videos of your creative process?

Hayes: I don’t mind being open, because I am a writer. Everyone knows I’m writer anyway, so to say I wrote this and all the parts of my songs I write all the time…I write for a lot of other people. They’re not really surprised that I wrote a piece of something I’m on, and maybe even if I got a feature…[laughs] I’m very cocky. I can write.

How Hayes’ Mentality Changes As A Ghostwriter For Others

Hayes: I think when I do the writing for other people that…I can’t say it’s freedom, but when you write for somebody else, you want them to keep working with you. So you gotta make it the best you can make it. You can’t make it a representation of yourself, but it is a representation of yourself. I think you need to put yourself in that person’s shoes and compliment their brand or whatever they are trying to get across at that time in they life. You gotta compliment their whole structure—everything that is making their career at that time if you wanna be a good writer or a good addition to the writing team. I would just say pay attention to what they are trying to come across with at that time, brand-wise, personally or life-wise. So many different things go into play.

DX: How difficult is that? How long is that process to learn how to put yourself in somebody else’s shoes?

Hayes: We got this new group, me and Floyd [Mayweather], got a girl group called KNS, and we just finishing their project. They gonna start dropping end of this summer, and it’s gonna show on VH1 with Ryan Seacrest about they shit. Working with them, I was just thinking, “Girl power. Let’s just do this for the ladies; let’s make this the best.” When I worked with Dre it was just like, “Come on, man.” Dre’s life was an open book, so you could see everywhere he came from, and his whole thing was about maturing. Working with Tim was just dance music; he wants everybody to have a good time.

DX: As you step out of that mentality and go back to writing for yourself, what are the differences your fans will see with this “On The Block” EP?

DX: Aside from the name of it, what changes or what type of evolution should fans expect?

Hayes: I’m just tryna get more active with people who support me and the Hayes movement. I really wanna start giving more music. I been gone; I been writin’ and around…I’ve been active but not supplyin’ the people who have been supporting me. I wanna be a better provider and supplier of content for the people who have kept an eye on me since the beginning, because I make them wait so long in between. That’s why I was trying to do the “31 Days In May” just to say, “Hey, I’m not gonna do something this time then go away. I’m gonna be in your face everyday now. I’mma try to be your face every week now. I’m in the deck everyday. I’m tryna step up and release, release, release.”

DX: Is it more difficult to have that daily presence?

Hayes: It’s not difficult at all. That’s one of the things that comes easy for me. I’m not preoccupied with other things. I’m ready to do this full blown. I used to let fans distract me, now I’m not letting them distract me. That’s for the “31 Days In May,” which is really just a commercial…a daily commercial for “Images.” It’s just to help with the promotion of that song, but we didn’t really cover that much. It was just something I was tweetin’ for people that was following me. and then it skyrocketed. For my core people, they like it.

DX: As a businessman, you were involved with two pretty high profile deals that didn’t necessarily go all the way through for various reasons. What do you take from that as you go forward?

Hayes: This time it don’t depend on anybody else. Last time, and the few times I did some deals with some different people…the most important thing I learned was that the best terms are your own terms. The best release schedule is your release schedule, ‘cause you can’t let yourself down no matter what you do. Your expectations from you will always be about you and things that you could pull off and recover from. I say the best schedule is your schedule. The best idea is your idea. Make sure you are hiring people who are working for you and working with you is two different things.

Hayes: Well, we got The Money Team. Me and Floyd [Mayweather] are partners at Filthy Rich in The Money Team, so it’s more independent than ever. Me and him do it all together, but basically his thing is, “Hayes is my partner, I let him do what he do, and I just oversee it.” It’s not really like at Aftermath, where we gotta be approved before it go out. It’s really like me, Floyd, and we got Bill…we got a team of solid people we believe in. It’s a small team, but we got the same goal.

DX: How did you end up connecting with Floyd?

Hayes: I’ve known Floyd since I was a kid. I been runnin with Floyd now over 14 years. That’s how long I’ve know him…we been through it man. We been doing this for a long time. Like with the Filthy Rich records…he’s been in the wings the whole time with the whole Interscope deal and all that. He was there for the whole Tim and Dre shit. Me, him, and 50 cleared the situation before they fell out. He was there through all of that and he still there now. That’s my brother.

DX: That’s a nice situation to be in after everything that dropped. Last question, is everybody still on good terms?

DX: So we will see surprises soon?

Hayes: Definitely! I promise some surprises! I got surprises you ain’t even thinking about, man. You could definitely believe that anybody I worked with, I will be working with again, because I never ever burn relationships. Right now it’s about the re-launch and getting back out there. We are The Money Team. I can’t say we don’t need a major, but you never know what’s coming.

DX: Seems like you guys are doing pretty well.

Hayes: This time it’s more than that. I’m really trying and really working hard to prove I can do this and get it done and be there. “On The Block” is just a new installment for the EP coming at the end of June.