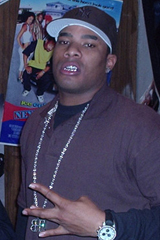 New Orleans’ newest favorite son is only 21 but in the last six months since he’s signed with P, he’s accomplished more than many rap veterans. Chart-toppers, tours, TV and movies! His debut, Straight From The N.O. just could be the CD to put New No Limit back in the rap game.

When did you know you were going to be big?

When I started getting hated on, that’s when I knew it was real. My mom always told me, ‘No matter what people say, as long as they talking about you. If they not talking about you then you got to start worrying.’ When I started getting hated on, like people saying, ‘He’s not gonna make it,’ I was like, why are they saying stuff like that. And a local rapper came to me and he was like, ‘You going to hear so much stuff about yourself now. It’s the thing with being a rapper. If you don’t do something, you gonna hear that you do it. Stay focused. Be humble and don’t worry about what nobody say about you.’ ‘Cause I never really cared anyway. Nobody could tell me nothing that could hurt me so I don’t be trippin’ on nothin’ they be talkin’ about at all. I just do me. Continue to go forward with it. Never lookin’ back. I don’t have time to look back I’m so busy.

Were you on an independent label before New No Limit?

I was with Take Fo’ Records. In New Orleans.

So that your paying dues period?

Not really. It wasn’t hard over there. At first, they didn’t want to sign me and I just used to hang around. I used to tell them, ‘Ya’ll are sleeping on me. Watch. I’m going to blow up on your ass.’ There were rappers there already that had established names in the industry and they was known and that’s who they used to always talk about. I was nothing. When I got my chance, I didn’t use them for no promotion. I promoted myself. I was in the streets–heavy. I was out there. I told them, I said ‘Watch.’ And I end up being the head of the record label, the #1 seller for them. I plan to do the same thing for No Limit. Just come over and, not really take over but have a strong name as a No Limit seller. When you think of No Limit, you think of Master P. I want when you think of the New No Limit, you think Choppa. Choppa came and he done his thing. Straight up.

Are you off of Take Fo’?

I still have a contract with them. I had two years with them when P came around. They just signed over to No Limit and they still get credit, on the cover and stuff.

When you were coming up, did you want to be on No Limit?

No cause when No Limit was in its prime they had so many artists. I was like how do they keep up with them. They got 30 different artists. They had a CD coming out every month. It was coming soon