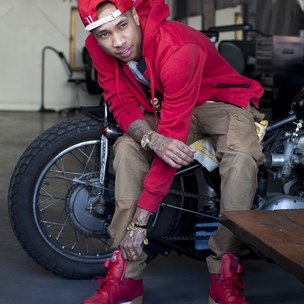 “My fans are kids,” he offered during an exclusive but very brief interview at the launch of his Reebok T-Raww in Lakewood Calfornia.

Granted, that’s not exactly the type of answer that would furrow Charlie Rose’s brow. But if we may get stereotypical here for a bit, Tyga isn’t too far removed from being one of the teens in a line literally wrapped around the shopping mall just to get a glimpse of a chart-topping rapper. The Compton native’s single, “Dope” borrows from Dr. Dre and Snoop Dogg’s 1992 single “Deep Cover (187).” Tyga was three years old during the release of that musical merger between Long Beach and Compton.

“I was probably nine when I heard my stepfather playing it, and I was like, ‘Man, this is hard,’” Tyga explained. “I remember [Fat Joe] and Big Pun did one too. That one was crazy.”

Tyga is in an interesting position. Hip Hop’s aging generation wants today’s “wet behind the ears” rappers to do their homework and pay homage. But as Mac Miller’s 2012 legal dustup with Lord Finesse proved, there’s more to it than just making a few phone calls.

“I had actually reached out to Nas, and he said his daughter was a real big fan,” Tyga said, when recounting the origins of 2012’s “Kings & Queens”. “He asked her if he should do a song with Tyga, and she said, ‘Hell yeah!’ So I definitely appreciated that. A lot of the older emcees are people that I really look up to, and now it’s great to be working with them.”

Welcome to 2013, where the generation gap is more pronounced than ever. An Illmatic fan may scratch their head hearing God’s Son next to Tyga and Wale. But Nas apparently knew the same thing as the bulk of the parents at the mall. Much like Nasir and Destiny Jones, or Tyga and his infant son King Cairo Stevenson, there’s a difference of about 20 years (or decidedly less for some) between many of the parents on hand and their children. The shoe launch featured plenty of parents with tattoos covering their visible extremities and clothes that didn’t. We are Young Money, indeed. Tyga may not be too forthcoming when addressing controversy; a question about Honey Cocaine’s friend Freddy E committing suicide is quickly waved off with, “I’m not talking about that.” But he has been a quick study in tailoring his many interests—pornographic or otherwise—to his fans’ changing world and their disposable income.

How Music Led To Tyga’s Partnership With Reebok

“I think music is just where you start,” Tyga added, when explaining his foray into fashion.” He says he spent a full day at Reebok’s headquarters custom designing the sneaker that had a crowd of 300 plus tweens and their parents spending eight-hour shifts outside of the mall. In addition to the reported 17 colorways of the shoe, he plans to expand Last Kings to a retail spot in LA’s Fairfax District, which currently houses stores by The Hundreds, Flight Club, Diamond Supply Co. and others. “You use this as your outlet to do other things. Music is not the only thing that I wanted to do, but it’s the first thing that happened for me, so I just took it from that…If I was in high school or middle school, and one of my favorite artists was coming out with a shoe that was $80 and a clothing line with shirts that were $40 and $50 that was still good, quality stuff, I’d be excited.”

There’s no guarantee of a middle ground being reached between the excited fans still attending school and crotchety, older fans that begrudgingly indulge Tyga’s collaborative works with Nas. Or Ice La Fox. But the common ground seems to be music, parenthood, and—at the very least—appeasing the offspring that have an interest in that music. As far as Hip Hop-related headlines go, you can do so, so much worse. In the meantime, there’s still the issue of the music. And for Tyga, despite him candidly admitting it was an entry point, there’s still an investment of time in effort into the hobby of music that quite literally opened the door to retail.

“[I find inspiration] from fans and my lifestyle in general,” Tyga explained during an interview portion of the retail proceedings featuring DJ Felli Fel of The Heavy Hitters and Southern California’s KPWR “Power” 105.9 FM. “You travel around the world and meet different people. But for some reason, it all connects to LA and being home. It’s really about the fact that music is supposed to be easing to your ear when you hear it. It just has to feel right. It’s a vibe. When you get in a creative mode, my process is to make it happen.”