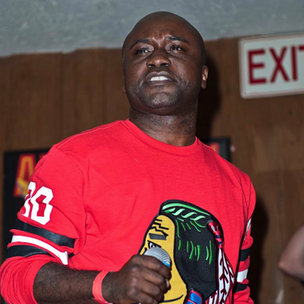 Havoc isn’t really trying to talk about Mobb Deep. As a matter of fact, one of the requirements for an interview with Hav is not talking about what can best be described as an estranged relationship with Prodigy. In theory, it should be easy to talk around what’s on everyone’s mind, because Havoc’s body of work reads like a page from someone’s best selling emcees of all time list: Eminem, Notorious B.I.G., 50 Cent, etc.

In addition to his Beats Collection album released via iTunes this month, Havoc is dropping his third solo effort, 13, in May. At his best, Havoc’s work behind the boards has been criminally underrated; simply calling it dark or grimy discredits the amount of musicianship found in his tracks. And, not for nothing, but those aforementioned productions make listeners want to physically harm people. You can’t really put a price on that.

So it was with all of the above in most people’s minds that Havoc—never one known to be an “open book”—agreed to share his thoughts. He was surprisingly humorous about his value in today’s marketplace, and he also revealed a little known story about working with Diddy, Notorious B.I.G. and the Lox. And, as it regards Mobb Deep reuniting for the Paid Dues festival, Havoc’s thoughts can be summed up in two words: “No comment.”

Havoc Reflects On His Legacy And Being Embraced By Younger Fans

HipHopDX: You’ve produced for Notorious B.I.G., Eminem, and obviously the Mobb Deep work speaks for itself. What will your ultimate legacy be as a producer?

Havoc: I would say that I stayed true to my sound. I was a producer with consistency, and I was someone that held New York down…held the East Coast down as far as production.

DX: How difficult is it to stay true to that sound with so many skinny jeans, mohawks and glow sticks prevalent in Hip Hop right now?

Havoc: [Laughs] It’s really nothing difficult. The more you see things like that, it’s more of a reason to stay who you are. I’m not trying to become some kind of weirdo out here and cater to every little move that changes. I’m not trying to go every way the wind blows; I’m just trying to be me. It’s helpful to see that and just go, “Oh, okay…alright.” You see a lot of people trying to change up their format, and some people are successful with it. But there’s just a few that are really doing it. I appreciate everything. I might not appreciate the skinny jeans, glow sticks or whatever, but that’s not gonna make me bitter in any way for not fitting in to that category.

DX: On “The Kush” you used the same Billy Brooks sample from “We Don’t Love Them Hoes.” Do you purposely do that to reintroduce yourself to the people too young to remember those classics?

Havoc: Yeah, they might be a little too young, but I have confidence in the young people that really do love Hip Hop. A true music lover is gonna go back and listen to the history of certain groups and things that came before the stuff that they like now. That being said, I think they’re gonna appreciate this as much as the old stuff. I try not to go too far out of what I do. I keep it the same, so that it can be a brand you can trust and depend on.

DX: Going back to your statement about holding New York down, what do you remember most about working with B.I.G. and The Lox on “Last Day?”

Havoc: [Diddy] commissioned me to do a track for him. Back in those days, we recorded on reel to reel [tapes], and somehow the original track got lost. I don’t know how—I guess somebody maybe was hatin’ or some shit. But I had to do another track that sounded similar to the one that you hear now. I remember being in the studio doing the track, and [The Notorious] B.I.G. was in the other room recording. I remember Puff coming in there, and just making sure everything was smooth. It was pretty normal, and Puff was cool. Nothing out of the ordinary happened. I did what I had to do, and I was out.

DX: So, technically fans have never heard the original version of “Last Day” that you did with Biggie?

Havoc: Yeah, the final is different, and Puff was pissed. He was literally pissed like, “Yo, I want the fuckin’ beat I paid for!” He was not playing. And I was like, “Yo, shit got misplaced…” And that’s enough to make you not even be fuckin’ part of the project. That’s enough to make someone say, “You know what? Fuck it. Give me my money back.” But he had faith in me. I did the beat over, and that didn’t happen.

DX: That’s pretty wild. We’re coming up on the 20th anniversary of Juvenile Hell. What’s the biggest difference with Havoc from 1993 through 2013?

Havoc: I’m a bit more critical of the music I do. Back then, it was really untapped energy. I wasn’t really worried about what would play on the radio, and I was just doing music. More and more, as you get into the industry, you get that pressure of radio. Now I’m in a zone where I don’t give a fuck about radio no more. I would appreciate it, but these days, it’s just like, “Let me just do what I do.” I don’t have that pressure anymore, and it actually feels good.

DX: True. Fast-forwarding to this pressure-free zone you’re in now, what’s behind naming the album 13?

Havoc: It’s just a real special number to me—13 is like my luck number personally. Throughout history, if you look at nature and just other things, everything can kind of be broken down to 13 sometimes. It’s just a number I chose. It’s my lucky number, and I believe this is gonna be a good solo project for myself. Naming it 13 goes against the grain a little bit too.

DX: The first track, “Tell Me To My Face” finds you and Royce Da 5’9 together. What was the reasoning there?

Havoc: I did the beat with no feature in mind, and then a light bulb went off in my head. Out of nowhere it was like, “Royce. [He’s a ] dope lyricist and somebody that I respect as an artist.” I reached out to him, and he responded. They didn’t have to do that, so I respected that. I sent over the track, and they sent it back. Right now, we’re just feeling things out. Royce has a busy schedule, and I have a busy schedule too. And I think the song is sufficient enough to where we don’t really have to push anything. It should have a life of its own.

DX: How different would your career be if you had things like Pro Tools, Fruity Loops and all the different production software available now?

Havoc: I think I would’ve been more advanced a lot faster. I had to learn a lot of shit on my own. If we had Fruity Loops and all that kind of stuff back then, it would’ve been all crazy…too fast.

DX: DJ Premier, Q-Tip and Large Professor are some of the few producers whose beats you’ve rhymed over. What kind of influence were they?

Havoc: They were very influential. I used to watch them, study their sounds and implement what they were doing into the stuff that I was trying. Without them, I don’t know how my sound would be what it is now.

DX: The plan was to ask you about touring as a soloist, but the news about Mobb Deep reuniting at Paid Dues kind of threw a wrench in that. How is that gonna work out?

Havoc: Right now, I don’t have no comment on that. I’m just gonna let the chips fall where they may. Hopefully, whatever me or [Prodigy] decide to do, it will be something that everybody likes.