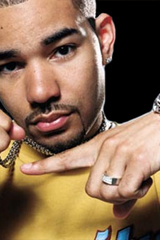 Don’t hate. It’s hard work being so well connected. When he’s not clocking time at NYC’s #1 hip-hop station, Hot 97 or rocking the block with his street-heat mixtapes, DJ Envy, the two-time TDK Just-O Mix Tape Award recipient is grinding out tracks with his production company, BLOK Entertainment. Now he’s even busier with promo tours and press days for his own February 11 release, Blok Party, Vol. 1: The Desert Storm Mixtape. February 11 hmmm. That date sounds familiar. It’s the same day that 50 Cent’s Get Rich Or Die Trying drops. “50’s gonna do real big numbers,” predicts Envy-no hate detected in his blood. “And I hope he does because my album comes out the same day as his. So if he gets a million people in the stores, that means a million people gonna be looking at my album with his.”

That’s just a taste of how this Hampton University graduate puts his now-you’re-thinking marketing schemes into practice. “Going to college just allowed me to learn the business aspect of the music industry, contracts, things a lot of artists won’t know because they never learned it,” Envy emphasizes. “They just know rap. With me, I learned the business, how to look at a contract, how to market. But I never stopped DJing.” For NV, as the diamond-encrusted dice read around his neck, his career choice was either play ball or do music. But he didn’t make his high school senior team. Luckily, the slim Queens-bred kid lived down the block from Clue, and the world-famous DJ promised he’d be back to scoop his blok buddy up when he got a deal. Sho ’nuff, he did. “From doing mixtapes and being on the radio at Hot 97, I met a lot of artists and established relationships with them. So when I signed to Desert Storm [Clue’s label], it all came together. Everyone that’s on my CD I basically have a relationship with or know. It was pretty cool.” Cool like a stank breath-stealing Altoid. Check the guest list: Jay-Z, Ja Rule, Redman, DMX, Fabolous, Busta Rhymes, Styles P, The LOX, Murphy Lee, St. Lunatics, 3LW, Memphis Bleek, Foxy Brown, Baby, plus skits featuring Clue, Jamie Fox, Stephon Marbury & The Birdman. “I was just grindin’ with tracks and artists throughout the whole thing.”

The result is possibly the year’s most geographically complete and concrete-solid compilation, covering the South, Midwest, West, NY, party songs, hard rocks, R&B jams. A lil’ bit of everything. “We hit every market with this,” Envy assures. “I always wanted to do an album. It’s a mixtape, not a compilation. Who wouldn’t want an album with a Jay-Z song, Redman song, DMX song, Ja song? Mixtapes were doing so well and DJs were selling mixtapes so much that mixtape DJs were getting their own deals and doing well. I was definitely the next to come.”

It’s late 2002 and Epic Records, which distributes Clue’s Desert Storm, is throwing Envy a record listening party at the Sony building in midtown Manhattan. Clue’s in the house. His manager, Skane Dollar is, too. Envy considers both men his mentors. He’s learned well. He hollas his name over every track, a la Clue, so DJs don’t jack his ish. He’s formed his own production company, BLOK Entertainment, that has done beats for Ja Rule, DMX, Foxy Brown, the Def Squad, Funkmaster Flex, Irv Gotti’s Murderers, Fabolous and the flick “Exit Wounds.” They also produced four tracks on Blok Party Vol. 1: The Desert Storm Mixtape, and rep three artists, rappers Coke, XO and an R&B kid named Mike Charles. Plus Envy still finds time to push one mixtape a month, or between 12-20 a year.

Fast forward to Monday, January 27, 2003. Envy and his manager Wonderful are packing their van for the next leg of their promo tour. Fresh from the barber shop, Envy is making one last stop at Sony to, among many other things, speak to this journalist. His answers are quick, to-the-point. Time’s a wasting. As if he would ever reveal his formula for success to anyone, I gamble, and ask for the magic behind his mojo. “How do you know a song’s hot?” Not a second skips before he responds: “If it makes your head bob, it’s hot. It’s just your ear.” Hmmm “Who’s next in terms of skills-not sales-to look for?” He pauses. “Joe Budden. And not because he’s a Desert Storm artist.” He shakes my hand. I bob my head. He bounces back to business. Holla back!