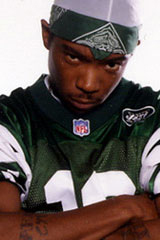 Ja Rule: Love to Hate Him!

It’s official. Ja Rule claims that after his next album, he’s retiring from the rap game, a notion that most kats find pretty hilarious, if not a little pretentious. After all, Ja is the quintessential Hip-pop star, and he has the ice, record sales, movie credits and MTV Best of Cribs archive videotape to prove it. He just gained notoriety at the peak of 2000, so his retirement proclamation seems, uh, premature, to say the least. Then again, maybe his declaration isn’t so surprising. This is the same dude who boldly declares he’s like the “Michael Jordan” of rap, and His Airness does have the whole retirement bit down-maybe he’s been taking notes.

Love him or hate him, one thing is certain; people can’t stop talking about him. Whether he’s screaming out “murdaaa!” on one of his many misguided love ditties featuring Ashanti, making an animated appearance in a J.Lo video, or getting dissed by 50 Cent or DMX, he’s everywhere. In fact, he’s been so busy making films and touring that he only spent 12 days (you read that right) recording his fourth solo project, Last Temptation. And though it seems virtually impossible to produce a quality album in less than two weeks, Ja contends he had it all under control.

“I don’t write anything down, I just like do everything in my head, so I do it when I get to the studio and just create right there on the spot,” he explains, methodically rolling a blunt. He glances up, solidifying his statement with an intense, pensive gaze.

He adamantly maintains that despite the lightening pace speed in which he recorded it, he actually worked the hardest on this album.

“Conceptually, I wanted to just come very truthful, ya know. During the course of making three albums, you go through a lot of shit, so I just wanted to reflect a lot of that shit that I’ve been through over the last three albums, I went in there and did the damn thang,” he says with a self-assured half-grin.

Contrary to the happy-go-lucky vibe he emits via the joyful hooks and perky songs he’s penned, including Mary J. Blige’s “Rainy Dayz” (originally written for TLC) and J.Lo’s breakout hit, “I’m Real,” dude has indeed been in a lot of shit. From beefs with the metaphorically equipped 50 Cent and the tortured pit bull himself, DMX, to defending his all-important street cred, Ja has undeniably been on the defensive lately.

Aside from that fact that most people have difficulty determining whether he’s a rapper that sings, or a singer that raps (he says he does it to “flow better”), his mainstream success and never ending supply of thugged out love songs have caused many hip-hop faithfuls to question his legitimacy. And of course in hip-hop, once street cred is lost, it’s over. For the past year, Ja has been haplessly teetering on the brink. On the one hand, he’s an MTV and pop radio mainstay, which is a definite no-no for any rap artist claiming to be “street”; but on the other hand, he’s the primary reason that J.Lo could seamlessly transform into “Jenny From the Block,” complete with spins on local hip-hop stations and 106&Park.

“That’s their right to see it how they see it,” he says in reference to claims that he’s too commercial. “But it’s also how it’s painted. Once an artist makes a record that exceeds street level, they become a crossover artist, which is really unfair.”

And as for his place in the game, he says animatedly, “I don’t give a fuck about being the best rapper or lyricist or that bullshit.” His face contorts with disgust. “I know I’m the illest nigga in the game; like the shit I do, other rappers couldn’t do.”

Say what you will, but there’s no denying he has something working in his favor. He stays on the radio, Murder Inc. is expanding by the minute and he almost single handedly resurrected the “King of R&B’s” career with his lead single, “Thug Lovin'”well, maybe that was an exaggeration. At any rate, he’s formed alliances throughout the industry, one of the most notable being with the notorious Suge Knight, although he downplays the enormity of their friendship.

“It’s crazy, it’s like in this business you can’t have a friend,” he says, shaking his head in bewildered disgust. “Nobody’s mad at me being friends with Bob and Whitney”

While he’s made friends, as aforementioned, he also has a few enemies, if only on wax, the most notable being the pending beef with X. Back in September he had lots of folks talking when the two vented on New York airwaves. On Power 105, DMX claimed that Ja was not only his hype man, but that Alicia Keys could “bust his ass,” while Ja contended that X was jealous because he’s not selling like him.

So what does Ja have to say now? Nothin much. Mainly because X simply isn’t “doing anything to make me think about him.” Ja maintains he just sort of popped out of nowhere, “like a roach or some shit” harassing him.

“So I had to get him back, and it’s whatever,” he continues, indifferently. “It’s whatever. I don’t think X wants no problems because he’s really not that kind of an artist. To me X is X. He’s got the love of the people, ya know, they love him cause he’s X, but he doesn’t make big records and he’s not that kind of artist, so it is what it is.”

And that’s all he has to say about that. Now, let the talking begin