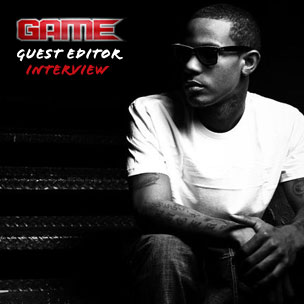 Within a year, Lex Luger has developed from a relative unknown to one of Hip Hop’s most coveted producers. The 20-year-old’s resume has grown exponentially as he works as half of 808 Mafia – the in-house production team for Brick Squad 1017. Lex has already teamed up with everyone from Jay-Z and Kanye to Rick Ross and now, Game.

Luger’s stock in the Rap industry has been steadily rising since the debut of his first radio hit, Waka Flocka Flame’s “Hard in the Paint,” and Lex shows no signs of slowing down. In fact, his newest collaboration with Game on The R.E.D. Album, has Lex Luger switching gears, being mindful to the fact that the Compton rapper is used to working with one of the greatest to ever get behind the boards. Talk about pressure.

When Game signed on to be HipHopDX’s Guest Editor this week, the first artist he wanted to see on the site was Lex Luger. Ask, and ye shall receive…

HipHopDX: How did you and Game get together for his second single “Bottles & Rockin’ Js”

Lex Luger: Really it was my publisher, he’s real good friends with Game, so when Game said he needed some work for the [ R.E.D.] Album he was like, “Well, I got your producer right here.” I made beats and went in for like, a week, for him. A week. And out of all of them, he picked [“Bottles & Rockin’ Js”]. That was crazy to me because that record… It’s a nice record but still in that “trap sound,” not really an eye-opener, like a huge, huge song. And I love the song. I love the beat, but I felt I had so many more crazy sounds that he could’ve messed with but I liked what he made it [into].

DX: That was the first time you’ve worked together right?

DX: The impression I get from your work ethic is that you don’t usually sit down for a whole week for just anyone.

DX: What was it that made you devote that much time to Game?

Lex Luger: I try to keep the same mindset with every artist, just doing music, but the approach I took with Game… I grew up on his music, and he had Dr. Dre [as a mentoring producer], you know what I’m saying? That’s my favorite producer. So I wasn’t necessarily trying to outdo him but, stay on that level with him. I felt like I had to take seven days out of my life to put into that, that’s Dr. Dre – I wanna outshine him.

DX: There’s got to be a certain level of intimidation in working with someone who’s worked with your inspiration. What kind of a challenge was that?

Lex Luger: I just try to read all the comments that people say about my music and there’s a lot of negative – there’s a whole lot of positive too, but I try and look at the negative side and try and improve on that. I mean, whether or not I’m a cocky guy or I feel like they’re just hating, that’s an opinion. And I’m trying to change that one person’s opinion, so I go on websites, and I look at what people got to say about the previous record that I dropped, and I really… I try to cater to the haters’ needs and their minds. That’s what I like doing. I like seeing a nigga say, “Oh, Lex Luger wack. All his beats sound the same.” [I like to] prove him wrong, you know what I’m saying? That’s what really keeps me going, trying to go to the next level really.

DX: In a few interviews, you’ve said that the reason the public keeps hearing beats similar to the “Blowin’ Money Fast” production is because that’s what the artists requests. Is it frustrating to be limited to just that?

. I don’t make a beat for an artist really, I just have that shit laying around – like the “BMF”-sounding beats, but they pick it. They like it, people like it, so, we make it do what it do… When that sound play out, I got another sound.

DX: Just talking to you, your demeanor is so chill and calm. It doesn’t seem like you could even come up with “Blowin’ Money Fast.” What do you pull from to create such aggressive sounding beats?

DX: You’ve said that if you could collaborate with anyone, it would be Pharell or Swizz Beatz. What do you think you could bring to the table if you ever did work with either?

DX: You’re so young. Does your age ever affect your confidence in this industry?

Lex Luger: Nah… A little bit though, ‘cause the old heads, they try and come after me, but I hold my weight.

DX: Does it still shock you to hear your work on the radio?

Lex Luger: Nah… Not really no more. I might hear a new song tonight and it won’t really bother me. Shit just be coming out, man. [Laughs]

DX: What was it like the first time you heard something you did over the airwaves?

Lex Luger: The first time I heard… I think I heard “BMF” on the radio… I don’t know, it’s a good feeling, man. It just felt like, I could conquer the world then. It felt like I could have a radio song on every station. That’s how I felt.

DX: It’s different coming out as a rapper than it is to come out producing. The producer’s face isn’t really out there like that at first. Did your people back home believe in you and what you were doing initially?

Lex Luger: Dang, I don’t know that they necessarily believed… I ain’t really care. I got kids to feed, so I could care less if they think I’m a billion dollar man or if I’m on MTV or BET or not… I don’t care.

DX: What have you been up to besides Game and this Gucci Mane and Waka Flocka Flame Ferrari Boyz work?

Lex Luger: DJ Khaled, I’m working with him. Got some new stuff on the album. Ace Hood, Jay-Z, Kanye West – everybody, man. We got the production deal [for] 808 Mafia. Everything popping off.