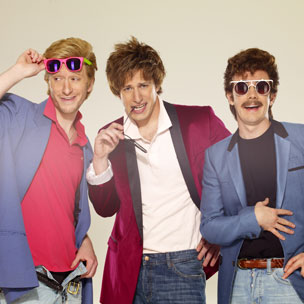 Four years ago, Saturday Night Live introduced a Digital Short that changed the face of parody rap forever. “Lazy Sunday” was the tune and included SNL newbie Andy Samberg, along with Chris Parnell. The rap track was comprised of tough-sounding rhymes from the two about…The Chronicles of Narnia and introduced the killer formula “Mr. Pibb and Red Vines equals Crazy Delicious”. Without mocking the music, the tune put together signature rap sounds about topics completely far from the genre.

At that point in time, Samberg and his best friend Akiva Schaffer were sharing an apartment in New York City when they landed jobs as SNL writers along with the third man in their Lonely Island crew, Jorma Taccone. As their Digital Shorts grew in popularity, so did the songs they were creating. 2009’s Incredibad was an album that combined some of The Lonely Island’s famed shorts, including “Natalie’s Rap” with Natalie Portman, “Shy Ronnie” with Rihanna, and the gift heard round the world, “Dick In a Box” with Justin Timberlake. Grammy nods, Emmy Awards, and the Lonely Island returns with Turtleneck & Chain. Sitting down with Andy Samberg and Akiva Schaffer, the two discuss their thought process in crafting comedy tracks. One of their biggest inspirations? Rakim’s dick.

HipHopDX: What did you do differently from Incredibad with Turtleneck and Chain?

Akiva Schaffer: Well, we tried to do different jokes…and then we tried doing the same jokes.

Andy Samberg: We were better at recording. More learned in our methods. I’d say more interesting choices here and there. Figured out different ways to make it sound a little more slick and a little more pop when we were going for that. Stuff like that.

Akiva Schaffer: We had the experience of actually – you know, we’re not musicians coming into it, we’re comedians. We’re kind of figuring it out as we go. With the experience of making the first record, now we know what it takes to make a record so we could go into it having all the little tricks we had learned.

DX: Are there any specific artists you look toward as influences? Especially when it comes to your rapping.

Akiva Schaffer: Yeah, I think if you listen to my dick jokes, you really feel Rakim’s influence on me. I tried to do something differently from the dick jokes Rakim did.

Andy Samberg: We’d like to say we’re more influenced by comedians, because that’s what we consider ourselves. We’re like fake rappers, so we don’t have a lot of people…

Akiva Schaffer: Yeah, our flows…we’re just pretending. But yeah, the music is greatly influenced by Hip Hop and Reggae and Pop music.

Andy Samberg: Of course. I will say there are certain tracks where we’re sort of channeling people’s different styles and stuff. Like, I’m definitely doing a little T.I. on “Just Had Sex” and me and Norm are doing almost like [Ghostface Killah] and [Raekwon] on the song “Trouble On Dookie Island” on the new album.

Akiva Schaffer: On “We’re Back”, we’re yelling like DJ Khaled-style screaming on the track. I wouldn’t go so far as saying influences, just the style of song we’re doing our satire of.

Andy Samberg: Homaging if you will.

DX: Is it any coincidence that Rihanna’s hook on “Shy Ronnie” (from Incredibad) is a very similar melody as her hook on “All Of the Lights”

[Andy and Akiva both laugh]

Akiva Schaffer: Is that true?!

DX: I’m not the first one to say this.

Akiva Schaffer: We wrote that melody! I’m not even acknowledging this, because that would be me thinking it’s true.

Andy Samberg: Hold on I have to listen to this…

[everyone is humming “Shy Ronnie” then “All of the Lights”]

Akiva Schaffer: I mean, if you want to get into it – and I’m not naming any names – did you hear the song “Iran So Far”? The one we did with Adam Levine?

Andy Samberg: [Laughs] Don’t do this!

Akiva Schaffer: Just listen to our song “Iran So Far” with Adam Levine and then listen to “Blame Game” off Kanye [West’s My Beautiful Dark Twisted Fantasy] and see if you notice the similarities.

Akiva Schaffer: We’re big Kanye West fans, so I just want to say that straight off…

Andy Samberg: There is no way that we are saying anyone is influenced by our shit. Think of how many times people do that in comedy, where they’re like, “Oh we did that joke” and we’re like, “Yeah, but we never heard it.” It happens all the time in everything.

Akiva Schaffer: It’s totally true. Although we did ask Kanye if he wanted to be on the song.

Andy Samberg: I will also say that I don’t hear any similarities between “Shy Ronnie” and “All Of the Lights”.

Akiva Schaffer: No, that one’s a stretch.

DX: It was on the Internet though, so it has to be true.

Andy Samberg: All of my Wikipedia info is just wrong, so I don’t trust any of it.

Akiva Schaffer: I filled out your Wikipedia page…

DX: Speaking of Wikipedia, on your page, Akiva, it was listed that you and Andy made People magazine’s Sexiest Best Friends?

DX: I didn’t know that was a thing.

Andy Samberg: I think they made that up just for us. They saw us being best friends and were so turned on that they had to create that category.

DX: When did you realize that what you were doing was much bigger than just Digital Shorts? Taking it back, “Lazy Sunday” was huge and you just seemed to keep going up from that point on.

Akiva Schaffer: That was only the second short we had ever made. We had only been hired on SNL like three months before that aired. We had only made one other short. It was kinda right at the start. We had just gone from being completely broke, living in an apartment together trying to make short films to getting our big break hired on SNL. Then a few months after that we has that video (“Lazy Sunday”) and it went to a whole other level so fast that we were…I mean, I’m kinda still amazed by that.

Andy Samberg: Yeah. But to us it was so early that the SNL Digital Short was exactly what it was. [Laughs]

Akiva Schaffer: Yeah it was only our second one, so that defined what they actually are.

DX: Are you surprised by how willing artists are to do what you want them to do on the songs? Or do you let them do their own thing?

Andy Samberg: Generally we write all of the lyrics and stuff if that’s what you mean. If it’s a singing part especially, we’ll do a whole mock-up of it generally with me singing horribly just to show them how the song would sound and how it would work. Then they come on and make it sound perfect. With rappers, we’ll just kind of give them like talking points and what we want them to hit and then let them write their verse. You can’t like – like Snoop [Dogg] has a verse on our new record (“Turtleneck & Chain”

). We couldn’t be like, “Hey, Snoop here’s this verse we wrote for you.” He’s gonna do it better than we would.

DX: You managed to get Nicki Minaj in full Nicki form on “The Creep”

. That’s ultimate Nicki on that track and the video too.

Akiva Schaffer: [Laughs] Yeah we try to ask people that we like and kind of feel will get it. So like, with Nicki Minaj…we initially recorded this whole album over last summer. Her album wasn’t even out yet, so we were just listening to her mixtapes and stuff. We were like, “This girl is crazy in the best way. We have to get to do something with her.” From her music we hoped she’d be willing to do something because she’s already into her character of being silly and weird in the best way.

DX: So you record the albums first and then Digital Shorts?

Akiva Schaffer: It goes both ways. For example, there’s three songs on this album – The “Shy Ronnie Pt. 2”, there’s “Motherlover” and “Throw It On the Ground”, which are ones we made at SNL on the show for SNL. Rihanna was the musical guest, we made “Shy Ronnie” with her. [Justin] Timberlake was the guest, we made “Motherlover.” Then we were like, “Those three are good. Let’s keep them and put them on the record.”

Andy Samberg: Then there’s 16 tracks we made last summer that are brand new and original. Since then, we’ve released three videos originally written for the album tracks, which is “Just Had Sex”

DX: Are there any other specific artists you want to collaborate with?

Akiva Schaffer: There are a lot of them, but I’m afraid to even say…

DX: Well you already have Michael Bolton on the album. Can’t get much higher than that.

Andy Samberg: We did get Michael Bolton! [Laughs] That dude is awesome. He fuckin’ killed it man. That dude has the voice of an angel.

DX: On the first album, how did you go about working with J-Zone? That’s a pretty big deal for a Hip Hop producer.

Akiva Schaffer: We were just fans of J-Zone and Jorma [Taccone] met him somewhere, and I wonder where he met him. So they started exchanging emails, and he asked him to send him some beats and he did. I don’t know the full story right now, because Jorma is on set. Same with Nu-Mark from Jurassic 5; he made beats on the old record and the new one as well. Jorma, once again, very social guy. Good at meeting people and exchanging emails.

DX: I believe we say “Pause” after that…

Andy Samberg: Well we have a whole song about that too.

Akiva Schaffer: The last song on our record is called “No Homo”, so…

DX: Are you already working on the third one?

DX: Will there be a third one?

Andy Samberg: Hopefully. We don’t have plans yet. We’re just trying to get this one out.

Akiva Schaffer: But if everybody buys this one…