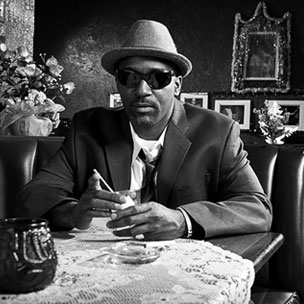 For anyone actually old enough to remember coppin’ cassette tapes, it is hard to believe 15 years have already passed since Aceyalone’s first tape, All Balls Don’t Bounce, was released to critical acclaim. What is even more challenging to accept for anyone starting to find strands of salt in their pepper hair is that 2011 marks the 20th anniversary since the cerebral spitter first stepped on the scene with his Freestyle Fellowship crew, who collectively ushered in a movement that would ensure Hip Hop artists from Los Angeles would not all be forced to conform to the massively popular Gangsta Rap stylings that ruled the City of Angels during the era when no westsider dare dabble in the Alt Rap of east coast contemporaries De La Soul and A Tribe Called Quest.

Two decades, and ten solo albums, later, one of the forefathers to contemporary offspring Blu, U-N-I, Pac Division and countless others is still going strong, still working to “redefine your Hip Hop guidelines.” As Acey enters his 21st year in the game, he is preparing a plethora of new releases, including a live-band backed offering, a revised release of his most recent genre-bending, Doo Wop-inspired solo album, and the first Freestyle Fellowship full-length in nearly a decade.

Speaking to HipHopDX on Wednesday (March 16th), in advance of his performance as part of the DX and Decon Records showcase this evening (March 19th) at this year’s South By Southwest festival, the veteran member of the Decon lineup discussed his forthcoming new projects. One of the earliest proponents of Jazz-infused Hip Hop also spoke about his professional relationship with the father of that style, Guru, during the latter years of the Gang Starr emcee’s life. And lastly, Acey responded to recent criticisms that his rhyme style and sonic palate has become dryer than two-day old turkey by flipping the bird to his detractors.

HipHopDX: I don’t wanna start on a somber note, but I wanted to get any thoughts you might have on the passing of Nate Dogg.

Aceyalone: Aw man, that’s a tragedy. I was thinking about that yesterday. The music industry lost a good one. … He was definitely an important person in the development of west coast Hip Hop – I don’t wanna say Gangsta Rap, ‘cause it’s beyond that. … He’s gonna be missed.

DX: Did you and Nate ever cross paths, either in L.A. or elsewhere?

Aceyalone: I don’t remember ever seeing Nate [Dogg]. I definitely never been introduced to him, or had the opportunity to talk to him. I would have if I had. But, I don’t think that ever happened.

DX: You did work with a recently fallen Hip Hop legend, Guru. How did y’alls collabo on his Back to the Future mixtape, [“So What It Do Now”], come about?

Aceyalone: I mean, I been having respect for Guru like even before I got in the game. And then later … [I] started knowing him by associating with the same people. … He reached out and asked me to get on this [Back To The Future

] mixtape, which it was an honor for me. … We wasn’t in the same spot at the same time when we did it. But then we had did [a show] and I met him and talked to him. … I tripped off of that too … how I was just dealing with the dude for a little bit and then [he passed]. And I didn’t get a chance to develop anything special [with him] before he passed. But, the same thing as [with Nate Dogg]: he’s a big part of that era that made a lot of what Hip Hop is today.

DX: You can obviously trace Freestyle Fellowship and your earlier solo works back to [Gang Starr’s] “Jazz Thing.”

Aceyalone: Yeah! Yeah, exactly. Like, the Jazzmatazz and all that. [That sound is] one thing we all did have in common. That was probably part of the reason he reached out to me. Like, on that level alone, [as] kinda holding up the same torch for Hip Hop ….

DX: I personally don’t like bringing his name up, but since that song was recorded during the Solar years I’m just curious if you had any contact with Solar?

Aceyalone: Nah, I haven’t …. I have no idea about the politics of that man, and what happened. I know like some rumors of whatever was happening during the time of Guru’s passing. But me, I don’t know the details about that cat. So, I definitely don’t say nothing negative. I just had like one or two encounters with him and it was peace. … But outside of that, no I haven’t; I haven’t talked to him.

DX: I’m sure almost all the readers of HipHopDX don’t care to read more Solar discussion, so let me move on to the producer I know they want me to ask you about: RJD2. I know you always like to keep things moving musically, but what are the chances of you and RJ revisiting the Magnificent City?

Aceyalone: It’s a good chance. I wanna do it. … I wanna go back and do that. I know [RJD2 is] down. … We did a Freestyle Fellowship song with him. So, we still kinda working together, but we haven’t concentrated on anything like just me and him yet. But, it’s coming. It all comes right back in a circle.

DX: Who you got on deck to work on The Promise?

Aceyalone: Well, we got our hometown cats: OD, the producer of [the 1999 compilation album] Beneath the Surface and stuff like that. And, Black Milk gave us a track. My boy Kenny Siegal … Exile … and a couple various, random cats you never heard of.

DX: So this is kind of a back to the future album [for you]; this isn’t gonna be another genre-themed album [like The Lonely Ones and Lightning Strikes]?

Aceyalone: Wait, wait, wait, The Promise is the Freestyle Fellowship record, you know that, right?

DX: Oh, okay. Nah, I thought it was your solo album.

Aceyalone: Promise is the Freestyle Fellowship record. … My solo record, I have a revisited album that I wanna release from Aceyalone, The Lonely Ones. It’s like a part two to that, a revised version. Me and Bionik went back in the studio and made it the full-length album that it was supposed to be. We cut a few songs off, and we added about six or seven more. So, it’s kinda like it’s the same record, but it’s really different right now. … And I’m working with this band called Slippers, and we’re [working on] a live record right now. I’m on my way to rehearsal actually right now.

DX: I need to switch gears here …. After your last interview for HipHopDX in ’09, you responded to a comment to the piece accusing you of being “bitter” and making “boring-ass” music. You made it clear that you don’t care about these criticisms, but how much of what your listeners tell you they want from your music do you take to heart?

Aceyalone: I take a lot of it to heart, but it’s better I’m learning over the years to like not take any of it. [Laughs] So, the more I get in my zone, the more I don’t give a fuck about what people talking about. … Show me where everybody likes you, and it’s all good … It motivates me, but that’s not my full motivation. But it does give me a little motivation when people talk a lot of shit, this or that. I know what I’m doing; I know it’s my life, it’s my career. So, I know what I’m doing; I know how it’s all gon’ fit in the big scheme of things at the end of the day. … It’s like the same [criticisms aimed at] anybody doing anything: whether or not they got it [anymore] …. But how you’re able to take your thing and do it is what counts.

DX: Can you say that you’re proud of every project you’ve released over the last 15 years as a solo artist?

Aceyalone: I’m saying … it is what it is. Yeah. I made it, and I did it, [Laughs], and it is what it is. And, yeah! Hell yeah I’m proud; I’m proud of every moment, of every bit of rhyme. ‘Cause when you connect with different people across the world, and maybe it’s one out of every thousand people that hear your music, but then you get something across and you brought something to the world. You can’t not look at that and just be like, “Damn. That’s cool.”

DX: Now, you mentioned you’re working with a live band. What are the people who attend Decon and DX’s Never Not Fresh showcase at South By Southwest this weekend gonna hear from Acey and the Slippers?

Aceyalone: Well, no, I’m not coming with the Slippers. Actually, I’m coming solo. I’m coming just basically as an ambassador for all the projects we got out [on Decon]. … I’m part of the Decon situation, and we are working on various projects [together], so instead of displaying all of ‘em I’ma come as an ambassador [for the label] and just do what I do, which is a little taste of everything.

DX: Not to give away too much, but on [your set list] is there more older stuff, more newer stuff?

Aceyalone: Well … we don’t know that yet. We might have to pull an audible right at the door. You never know. No, basically, it’s always like a lot of new stuff …. And then, Austin is a spot where we frequent all the time, and [so] I know I got fans there that wanna hear certain shit. So, we’ll run the routine. I think I got like 30 minutes, and we just gonna have some fun.

DX: If I can make a suggestion, since you are the ambassador for Decon … you need to bring your Decon label mate Freddie Gibbs out to spit to the sick “Arhythamaticulas.” That track is over 15 years old but it sounds like it coulda been on that Str8 Killa last year.

Aceyalone: What! That’s crazy. It came all the way back around; styles came back around. I remember it was tight new, and then people was like, “Oh, we’re not on that choppy shit, man. We don’t do that, man.” And now, look. See. That’s the beauty of it, man. I love it! And [Freddie Gibbs] can spit. So, yeah, I think we should try to make that happen.