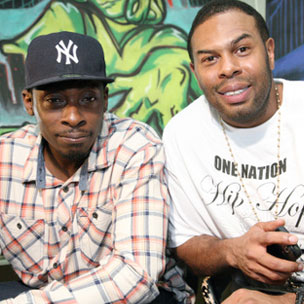 Pete Rock & CL Smooth look a little bit older in person than they do on their ’90s album covers – but they don’t look old, not by any means. On the evening of November 6, sitting in their cramped dressing room in the belly of the Barnum Hall Theatre inside Santa Monica High School, Pete, clad in a plaid shirt and jeans, chews peanuts and talks in slow, measured tones. The respected producer’s emceeing half, C.L. Smooth, has a militant intensity about him, a mean mug that borderlines a grimace – until you speak to him and his sense of humor reveals itself. They are an interesting pair, to say the least.

All jokes aside, the recently reunited pair sat down with HipHopDX just minutes before their special appearance to perform as the headliners of the third annual One Nation Hip-Hop Summit. A week earlier, they performed at B.B. King’s Bar & Grille in Manhattan and before that, as headlining acts on some dates of the Clean Energy Tour, which came to a handful of colleges and universities in California in the weeks ahead of the November 2 election, in a concerted effort to defeat the state’s Prop. 23 and raise awareness around the green movement.

In Santa Monica, however, politics were suspended, if only for the 15 or so minutes that DX was able to get an audience with the legendary duo. As video cameras rolled and photographers snapped flicks, DJ Pete Rock and C.L. Smooth discussed everything and anything on their minds – as only two pioneer vets can.

HipHopDX: The Clean Energy Tour, how did that come about?

CL Smooth: [It’s a] positive thing that we wanted to get involved with, of course it was over on the west coast, but of course everything that affects you indirectly affects you directly. So, we wanted to be a part of something positive and it was a positive movement. And we got passed and things looking forward to get your mind right and you want to change things, you can.

DX: Pete, what’s up with Lost Tapes 2? You on there when that comes out?

Pete Rock: I don’t even know what’s going on with that. I don’t know if [the work I did with Nas was] for this album or that album. I’m clueless.

DX: Did Nas reach out?

Pete Rock: I haven’t spoken to him.

DX: What have you been up to?

Pete Rock: Just working and on the road, doing shows. Trying to create.

DX: What has been the most unexpected experience, for instance I’m from Ukraine, and Onyx is going there soon…

CL Smooth: I would like to go to the Ukraine, that seems very interesting.

Pete Rock: I’ve been to Russia before. There’s a community of Hip Hop there.

DX: I like a lot of Soul music, man, but what were you guys listening to growing up?

Pete Rock: Who do you think we were listening to? That’s a good question to ask you, since you said the big word “Soul”…

DX: So you take that and interpolate it into Hip Hop?

Pete Rock: Yeah, of course. That’s what we’re doing it for, actually. And they didn’t even know what they were doing it, but we turned it into something for…. that was created in our communities in the ’80s. Kool Herc, Afrika Bambataa, those guys, made it into Hip Hop.

CL Smooth: Last week we performed in Times Square, at B.B. King’s [Bar & Grille]. We stayed out in the dressing room the whole night. It was the most crazy, we had a lot of producers and deejays surrounding the dressing room. Know what I’m saying? What I appreciate about traveling now is getting to see things. When you get more mature, you can sit back and see things a little more than you do when you are younger. You’re more unified in what we’re doing here and what the purpose it. And once you start to find out that, then it starts to get easier, the trip starts to get more fun, before you know it, you’re starting to drink red wine, splitting some of that cheese, then you start to feel a little better and get some of that music to go with that.

DX: What kind of wine? Merlot?

CL Smooth: Merlot. You drink that with anything.

CL Smooth: It’s definitely a truth serum but it’s the only serum I know.

CL Smooth: It doesn’t really matter. I remember what it is now to be …

CL Smooth: With yesterday, you can remember it better than I can, because I was actually living it. Now I’m a little bit more conscious of my movement, where we’re at, what we’re doing, just appreciating the people we’re around. You can be around here but not really be here. That’s the thing about music, it takes you somewhere else, you don’t really have to be here if you don’t want to.

Pete Rock: If you delve into the music.

DX: Pete, what’s Kanye West like to work with?

Pete Rock: I think he is today’s genius. Lyrically, musically, he’s taking to another level. And it reminds me a lot of when we were out back in the ’90s, ’cause we came with a new formula how to make music. It’s the same thing, but now on another level.

DX: Any other music excite you these days?

Pete Rock: There’s other artists that I listen to and I like. I mean, today’s music is what we’re trying to do but in a different way, you know? We always were original with a style of our own so we’re trying to recreate ourselves and it’s not an easy job but we’re working on it.

CL Smooth: Plus we look at everybody as doing their thing, it’s showtime. We’re looking at taking pieces of what they’re doing and what you admire about it it, the showmanship, how they look, how they take their craft seriously. That’s what motivates this group to do better and do more, and think that they can contribute more.

DX: You’re talking about yourselves?

CL Smooth: Yeah. Like I’m over here on the side talking about these guys. Music allows you to appreciate the music before we were born, during our time and after our time. When you make a certain type of music, it’s timeless, you’ll always be relevant, you’ll always be around. Know how to take the craft seriously.

DX: So what music do you want your kids listening to, as opposed to what they are listening to?

Pete Rock: Oh man, sometimes you can’t help it when you’re in the car with them. It’s your kids. They’re ahead of you…

CL Smooth: My kids aren’t kids any more, they can listen to whatever they want.

Pete Rock: He has three kids.

CL Smooth: They can listen to pretty much whatever they want to listen to. I don’t block them from anything. When I was growing up, it was like a limit to what you can listen to in the house when it was loud. I liked to listen to Mr. Magic and different shows, the [DJ] Red Alert show, listen to a lot of off-brand shows, like Long Island show, Mantronix, and all those different dudes, man, you know, like, Dr. Dré, all those guys from Hempstead, you know what I mean? A lot of dudes had a lot of great shows back then.

CL Smooth: Ed Lover & Dr. Dré. But they had these other guys from Hempstead, they had a nice radio show. I used to tape them a lot with mad cassettes. That’s what makes you creative… It’s not the brand names but the people that keep it rotating, and really appreciate it. Like a guy would come up to me and say, yo, this guy, and I don’t know that rapper, but it’s the one that inspired him to love music and get to me to tell me who and what inspired him to listen to my music. So, it’s like, oh, the rotation, still keep it learning, who’s what, what’s what. Nothing is just concrete, like you know everything, like you’re in the music business,  you make music, so you know everything. Like, I don’t know shit – I just know what I know. That’s how it is. We are stuck in our world, and we are learning still, that’s how we keep it fresh and new.

DX: Timeless music. Some artists are lucky to get that one song and you have numerous.

CL Smooth: We’re trying to build catalogues so it’s very delicate when it comes to that.

DX: At this point, are you working on new stuff or just touring off the catalogue?

Pete Rock: We haven’t been going into the studio yet, but I’m pretty sure we will once I’m excited about the beats I’m making.

DX: What was the spark that brought you back together?

CL Smooth: You [are] always connected to each other. Even countries at war with each other have to have treaties and sit downs, even mobsters have sit downs, even killers have sit downs. Gotta have sit downs and daily meetings to make things happen. Otherwise, if you’re not communicating in the manner, with the right tone, things are going to be a bit difficult. But with respect and admiration, things will look bright every day. You have to just look at it that way.