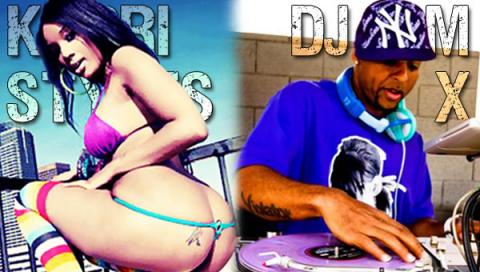 Few people in the world know how to have sex better in front of a camera than Kapri Styles. She knows it, fans known it, male performers know it, and of course, directors and adult studios know that. Kapri has only been in the adult industry for a few years but she has made a name for herself, in large part because of her apple bottoms, each bearing a Chinese tat. In the world of adult entertainment, where “ethnic” or “black” is a small niche of the industry pie, she is a bonafide superstar.

What fans may not know is that with Kapri, there’s much more than sex scenes. She’s also a music connoisseur who happens to be a great deejay, as this writer witnessed first hand at a New Year’s Eve/birthday party for Sinnamon Love one year ago. Dressed down, Kapri is a petite, light-skinned beauty from Atlanta who looks the part of a quintessential girl next door. She is very low-key, until she takes control of the two iPods and creates an Atlanta-like club scene at a townhouse in the San Fernando Valley, that is.

It’s incredible and unexpected to observe, but it’s no coincidence that Kapri Styles can be good at more than one thing. She’s a sponge when it comes to learning. On Twitter, if you follow her, you can see that she chops game often with Violator All-Star DJ Jam-X. Jam-X. When not deejaying at the hottest Hollywood night spots, Jam-X happens to be a photographer of models. He has shot Kapri. The two have not dated, Kapri says, but she does fess up that she has learned how to deejay from Jam-X, who is a part of a collective created by Scrap Dirty, Chris Lighty and his company, Violator.

HipHopDX: What’s going on with Vh1 Nut Chaser?
Kapri Styles: It’s a joke. Everybody wants to have Vh1 in front of everyone’s name.

DX: You’re a nutcase.
Kapri Styles: Hey, that’s how it is. I forgot that it was up there.

DX: Tell me what’s been going on, I know you travel a lot. So, what’s your business plan, what do you do?
Kapri Styles: What do I do? Everyday I hustle – I’m like Rick Ross. Everyday I’m just on the grind. Booking, club promotions, features, web, you know just anywhere. I’m trying to put my foot in all cracks.

DX: Tell me about a couple of exciting things that happened. I know you’re in New York quite a bit?
Kapri Styles: It’s just traveling gets work done.

DX: What motivates you such a busy-body?
Kapri Styles: Life. You got to live every day like it’s your last, you feel me? What’s the Latin word? Carpe diem, seize the day. If you have the ability to get out and get it, then you should. I mean people scream recession, but it’s a recession only if you think it is a recession.

DX: Your from Atlanta, right? What part?
Kapri Styles: You want me to disclose my locations? Let’s just say it’s Atlanta, DeKalb County, all that. You know how people pull out yearbooks and some ol’ shit?

DX: Okay, let’s move on. How has your experience been in the adult industry?
Kapri Styles: I have no negative things to say about the industry, always been positive. I’ve been in and out of the industry. You meet good people and just build relationships, you’ve known these people for a long time. As far as the industry you kind of have to grow from it, people say it’s not how it was before.

DX: How so? I mean, people can only assume what you do on an average day … speaking of, what is your average day?
Kapri Styles: I used to shoot almost four times a day. Now I may shoot once a month, and it’s by choice. It’s all about choices, you want to have other means of hustle, you don’t want to just do scenes, you want to do much more, if you want more.

DX: You’re diversified. Your true talent as a deejay is there, between you and me, not just for the interview purposes. When I heard you deejay with two iPods, you set the party vibe. Talk about that, I know you’ve been working with DJ Jam-X.
Kapri Styles: I take deejay lessons from DJ Jam-X. He’s my teacher [Bursts out Laughing] I took some classes from him. I was just doing it off an iPod, I always end up deejaying and putting on music for people and they be jamming. If I have the ability to do that, than hey …

DX: It doesn’t hurt that people know you from your scenes.
Kapri Styles: Right.

DX: What kind of reaction do you get when you go into clubs? Describe some of the scenes in the places you’ve been.
Kapri Styles: I’ve been all over in New York and Miami. In this recession, when I go into the club, it’s really good. It hasn’t been anything negative. More responses come from the females, and there are some males. They are accepting, and it makes me feel warm and fuzzy inside that people out there got love.

DX: How’s your spirit, when you have to deal with stuff from females?
Kapri Styles: People that portray themselves as negative and act all stuck up and cocky, they’re going to get bad attitudes. But if you’re happy, you humble to meet people, they are going to be more positive. They’re going to be like, “She’s cool as fuck.” That’s the majority of people that meet me, they know that I’m cool as fuck.

DX: Who are some of the people you want to give shouts out to in the entertainment industry, as mentors or peers, besides Jam X and Sinnamon Love?
Kapri Styles: I love the mind of DJ Kay Slay. I also like Jenna Jameson, the way she made it happen. There’s a lot of other people, but I look at myself as an a person, where I want to be. I learn from different people and their situations. You just got to live your life the best way that you can.

DX: What are your top five most played songs on iTunes?
Kapri Styles: It would have to be Suga Free’s “Why You Bullshittin,” that’s number one. I got Ice Cube and Lil Jon. I got Gucci Mane, “I’m My Own Worst Enemy,” then I have Young Jeezy.

DX: What’s next for you?
Kapri Styles: [Laughs] Vh1. Nah, just playing. I’m trying to go mainstream, though, and cross over. You never know what’s going to happen in 2010. If a door opens, i’m going to walk through it.

HipHopDX: What’s been up with you? Give me a quick introduction to who you are.
DJ Jam-X: DJ Jam-X, Violator All-Star DJs is the fam. I do a lot of Hollywood clubs and Hollywood events out here in L.A., also run and shoot for Cali Dimez Models. Also launching Jam-X TV, where I’ll be interviewing up and coming artists and established artists behind the scenes, some of my Cali Dimez shoots, things of that nature.

DX: So you have a small business empire. Talk about Kapri, I know you guys have worked in some capacity. She’s in the adult industry and you’re in the music industry. What  brought you together and how?
DJ Jam-X: She was at one of the clubs I was deejaying it. She showed some interest in possibly learning how to deejay and I showed interest in possibly shooting her for some of my upcoming shoots, and it just clicked from there.

DX: What do you think of her skills as a deejay? I know she loves the Crunk music, she’s out of Atlanta.
DJ Jam-X: You’d be surprised. She likes a wide variety of music. I’ve seen her sit there and word-for-word recite a Miley Cyrus song. It’s just like, she’s all over the map. She does a lot of Crunk stuff, but she really knows her music all the way around.

DX: Any thoughts on the adult industry? It’s different than music industry, they have some things in common. It’s rare for a deejay like yourself to cross over to that industry?
DJ Jam-X: Any time you’re dealing with entertainment in general, it’s just a really small industry. It’s not that big a jump, being here in L.A. and in Hollywood area. It’s not that uncommon. Other people in the middle states might be like, that’s just crazy, but we see it on a regular basis. Everyone from Kapri Styles’ to Tyreses to Meagan Good’s, they’re just hanging out. Here’s they’re just at the club. It’s just the nature of the beast out here.