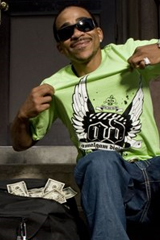 Max B: The Wavy Harlem Renaissance

The entertainment business is built solely around one
aspect…entertainment. And in about three years and running into the
business, that is something that ex-Byrdgang/Diplomat affiliate Max B
has seemed to capitalize on: being an entertainer.

With a sound that
has yet to be duplicated — he sounds like a cross between a modern day
Lou Rawls and Bizzy Bone — and with a name like “Biggaveli,” Max
certainly sets himself apart from his fellow emcees and singers. He is
back at it, by himself this time, with a new label home at Amalgam
Digital, a rising force in the world of Internet music suppliers; he’s
put out an incredible catalog of mixtapes, several guest appearances
one of which include fellow New Yorker Jadakiss, and has co-signs from
Cocaine City‘s French Montana and G-Unit‘s general 50 Cent.

We
had several interruptions during the interview from what Max calls
“People bringing money to my house every 10 minutes,” and a direct
request from his publicist to not ask any questions about an estranged onetime affiliate.
Deterrences and all, Max found a unique way to generate
interest outside of his former Byrdgang capo. Instead, he talked to HipHopDX
about everything from his opinion on the Harlem Renaissance, to how no
one on your corner has swagger like Max, and even his relationship with
Cam’ron. Perhaps the potential tallest rising star of 2009, get wavy with Max B.

HipHopDX: What’s been going on with Max B?

Max
B
: Well, what’s this, ’09? Yeah, this the wavy year! We wavy this year.
This the year that everything is going to happen, like some real big
stuff!

DX: How did the switch from Koch to Amalgam Digital come about?

Max
B:
Aw man, that was some quick shit, shout outs to Amalgam Digital. I
got a three-album deal, and they got all three of the joints already.
It’s digital tied in, and we waiting on the signatures to let them go
with the hammer. Once the hammer drops, everything’s going to be ready.
Just keep the question mark on there, coming soon, coming soon!

DX:
I hear that they distribute all of their artists’ records online. Do
they work with iTunes and Amazon.com or are they their own distributor?
How exactly does that work?

Max B:
I mean you know…that’s what
they do. They distribute it and spend all kinds of money and promoting
all over and doing stuff you know? That’s what they do and they give
you back half or whatever. I don’t know man, you know me, I ain’t really
down with all them sexy numbers. It was an in and out deal with some
upfront money and then when it comes back off the flip, that’s when you
see yours every month, know what I’m sayin’? It’s a 60/40 [percent] split your way.
That’s after you get the upfront money you go 60/40, then y’all
break even, and then it goes back up or something like that. It
benefits you every way though, so you can’t loose, especially when you a
nigga like me!

DX: You have a very soulful side to your music. Are you influenced by the “Motown era” or any old school artists?