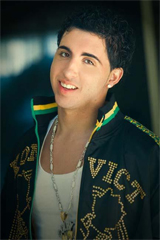 Besides the massive success of T-Pain, Akon‘s Konvict Muzik seems to be more in the business of signing artists than releasing material. With names ranging from Mack 10 and Sway Dasafo to Nivea and Lyfe Jennings, it’s a crowded house at Konvict. However, if you ask fresh-faced 20-year-old Colby O’Donis, being on a label is tough business, and you’ve got to hustle.

With his chart-topping Pop/R&B hit “What You Got” coming to a boil, Colby O will be a self-titled debut that hopes to achieve what Rihanna has, with teen mass appeal, from a male. The New York-born O’Donis speaks to HipHopDX about his two degrees of separation from Michael Jackson, returning Latinos to Pop music, and how he got ahead in the pecking order at Konvict, with a release date and official label backing.

HipHopDX: You had a New York City childhood. Not much has been talked about in that regard. How did you the city you grew up in influence you?

Colby O’Donis: I love New York City. I lived there for six, seven, eight years. I can definitely say I