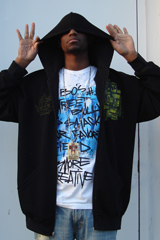 Panama: Jack Of All Trades

For the past six years, HBO‘s The Wire has shed light on the city of Baltimore’s crime scene, politics, drug trade and those who take part, from the distributors to the abusers. It has been arguably called “The greatest show in television.” Many of the sitcom’s actors have experienced the upper echelon of success. One of the most illustrious of the crew is Panama.

Most people know him by “The dude on season four that was beating up on Bubbles the entire season,” but Panama is more than just your average TV street kid. He not only excels in Hollywood, but he also has expanded his repertoire to fashion, and music. He is looking to accomplish, what only the likes of Jay-Z, Diddy, and few others have accomplished. Ignite and maintain an successful and lucrative film, fashion, and music empire. As his fashion line is called Bmore Creative, that name may be true of its co-founder.

HipHopDX recently caught up with Panama while he was grabbing lunch in Baltimore. He covers everything from his TV success, who he admires in music, the future of fashion, why music is in his ancestry, and the type of females that hes interested in. Ladies please be aware, he likes pretty feet and all teeth in place.

HipHopDX: Let’s kick things off with an introduction…

Panama: First and foremost, I am the kid Panama a.k.a the Spanish Kid a.k.a Mr. International, HBO‘s number one street bully, smack your favorite fiend. The dude on season four [of The Wire], that had the violent junky war, that was beating up on Bubbles the entire season. That’s basically where my break came through off the acting tip, when HBO was airing The Wire. That’s basically what I’m known for right now. On the live screen.

DX: Where did the name come from?

DX: The Wire has been called “The greatest show on television” how has being on the show affected your career?

P: The Wire, great show I definitely agree on that critical acclaim. It affected my career by making me more of an professional. Becoming a part of HBO, everybody’s watching, wants to know if you can really portray and if you can really get involved into your character. I’m not from [Baltimore], but It gave me a chance to really be apart of the Baltimore City environment, the public, the city, the smell, and everything that goes down in Baltimore City. I feel like a honorary Bmore member, and a native of the city. And to watch this city, to where I come from from Baltimore to Panama, it’s similar, but still quite different. It brings you back to earth when you see the everyday hustle, the everyday labor, and the everyday grind. When you come from out the city and step into the county its a clear difference from that point on, so as part of my character it makes me know that i must be real 100% and just do me. Bring what I do to the table, my character and personality to the forefront and keep it moving take what Ive learned, build character and build growth.

DX: For the record, where are you actually from?

P: [I am] originally from Panama the country, born in Brooklyn, raised in The Bronx and raised in Baltimore. I would consider myself a representative of Bmore, because Bmore is where I became a man, its where The Wire was known, it’s where I graduated from college, UMBC, its where my fashion line was started and I’m still in Bmore. I would be a representative of Bmore If I was to come out and really blow and get a record deal this is where I’d be known.

DX: Who are your influences as far as acting, music and fashion?

P: As far as music, I have a wide range of influences. You can catch me one day listening to Kanye West, one day listening to Maroon 5, Christian music, R&B. I think music is very powerful and I enjoy listening to different types of music, and every type of music adds to my music. I have no one artist influence, certain artists do certain shit that I take from [them]. As far as acting, I respect actors thats sharp at they craft, and what I mean by sharp at that craft is that they show growth. They continue to take acting classes as if they were not stars. I’m talking about Denzel Washington, Samuel L. Jackson, Mos Def, people that were theatrical at the beginning to the TV world and there still perfecting their craft. Will Smith, these are actors that influence me and give me the ambition and determination to do what i got to do. As far as fashion, I’m all about originality and identifying with myself. I like people that like to target to the whole world.

Right now Bmore Creative is something that were targeting to the urban Hip Hop community but we want to branch off overseas, European style. I would give my style sense something like a Diddy with Sean John, he’s like the only Hip Hop mogul that kept his clothing line fashionable and live in the streets.I would give a shout out to Miskeen. Some people say my clothing is similar to Miskeen, the originality how everything is custom made. The list goes on as of different qualities of what were trying to do, but as of right now its marketed to the Hip Hop and urban world.

DX: Can you tell us a little more about the clothing line?

P: It’s called Bmore Creative basically a play on words on Baltimore, it’s definitely a success right now. We have such artists as Lupe Fiasco, Method Man, The Clipse, Buffie the Body, Big Tigger, Biz Markie wearing our clothes. It’s custom made, everything we do is custom made. It’s no duplication and it’s hand done. We use acrylic paint for our clothes, we also have a personal relationship with the public. Our consumers when they come and purchase our clothes, they give us ideas right there on the spot. So we have a relationship that we build with our consumers, its not just that they come and look at a hot design and say we want this. We add to a design we take away from a design whatever the case might be, as long as they know that this is something that they really wanted to buy. I’m the Co-CEO of Bmore Creative, the head designer is Andre Williams. I’m the marketing genius behind the whole clothing line, I don’t design – not one shirt; I don’t touch not one shirt. Andre takes care of the head designing. I will give him advice, but other than that, I make sure the shirts get out there.

DX: I’ve read that you come from a musically talented family, who exactly in your family has music ties?

P: Music-wise, my pops is not a musician but was always into music doing promoting, doing plays, across the country booking artists like Maze & Frankly Beverly, LL Cool J, Queen Latifah. My father was probably one of the first ones who put them out there when they first started. Its the new generation of my family that’s really musically inclined,which is my cousins who both have deals with Scarface and DJ Clue. With our collabs and our experiences just to be open to a cultural background. Most of my aunts was in dance groups, and growing up in that type of history it effected with our music and what we do now. I had a few uncles that played in a few bands but nothing major, performing in front of us on like Christmas and Easter back home in Panama. It adds up and brings growth, so that’s what I mean when I say I come from a musical background across the board.

DX: Which area, out of fashion, music, and acting, are you looking to most excel in?

P: I’m looking to most excel in acting. Acting is my passion. Acting is some shit that I would do for free. I love to act. I went to school for it for a reason, to sharpen the craft, to make sure when I step on screen or step on stage its going down. That’s what I’m looking to most excel in. Rapping comes second, rap is more so I was getting great feedback from people was feeling the music. I understood the game, I studied such artists as AZ, Jay-Z, EPMD, Mos Def, Talib Kweli, Common from everybody, and allowed them to influence me, and breath what I thought was a smell of new money, A new fresh of breath air type of music that I do, and I’m really bringing me.There’s no character, no gimmick this is just what I do. But to excel in acting, and music would come second.

DX: For our female readers, Are you single and what do you look for in a female?

P: Yeah I am single. For the ladies, I’m looking for a shorty to be real. Personality is major with me, but to still have a pretty face; I ain’t even gonna front. Not just a nice personality, I’ma keep it funky with you: I like naturalists, I’m not really big on makeup. French manicures is my shit, you know colorful nails, diamonds all crazy. All your teeth, I need all that. I’m really looking for a cultural chick, one I can really relate to but If I find a girl that can rock with me and understand my struggle, and understand it’s gonna be ups and downs, we can get it poppin’.