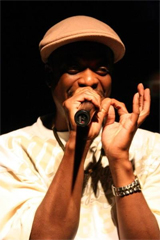 Devin The Dude has been finding his way into significant record collections since The Geto Boys‘ 1993 posse cut “Bring ‘Em On.” Finding his way within the Rap-A-Lot clique, the Florida-born, Texas-relocated emcee/deejay and budding producer used sugar, not vinegar to win his listeners over. In an era of abrasive gangsterism, the soft-spoken, often melodic vocalist spoke and sang about simple problems being solved with a bag and bowl or a bra strap and a Budweiser.

As fate would have it, the gangsters respected it. The biggest influences on gangsta rap, Dr. Dre and Scarface, both took a liking to The Dude, and put him on center-stage on their biggest projects (2001 and My Homies respectively). Devin‘s become more of a Hip Hop household name, but nearly anybody who understands his creativity and message realizes that his lack of mainstream success remains a travesty.

With four solo albums and an Odd Squad group effort under his belt, Devin The Dude formally announced his departure from Rap-A-Lot Records last week – after a staggering 17 years there. Despite a hot album every three year average (I can divide), Devin says he’s using his independence to make more music than ever, and welcomes extended opportunity for feature-work. With a handful of laughs, recollections and mild-mannered honesty, the Dude is doing anything but riding into the sunset this early in the movie.

HipHopDX: Congratulations on the independence. As far as not renewing your Rap-A-Lot Records contract, how tough of a decision was that to make for you?

Devin The Dude: It