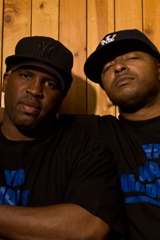 NYGz: Giants In The Mental

Most of you football lovers would dwell on the fact that
the New England Patriots are going for their fourth ring in five years.
But in a time where Hip Hop and sports are forming an unbelievable
alliance, there is an new takeover on the rise.

With the Super Bowl XLII
upon us, it is that time of year again. Get your chips, wings,
soda, and homeboys and homegirls all together in one spot on one night
to witness the NFL‘s elite duke it out in front of over 93.2 million
viewers (In the US alone).

To celebrate the occasion, HipHopDX got football-minded with our love of Hip Hop. To represent the New York Giants, we got DJ Premier‘s NYG’z. Sharing a name and a hard-hitting reputation, it’s strange to hear that half of this group favors the Patriots in this match-up. We had intended to grab die-hard Patriots fan Edo G and his Special Teamz to talk about the Boston-swagger going into the game, but the “biggest bulldog” and crew might’ve started the celebration a bit early, and weren’t available throughout the week.

In any event, enjoy the game, the commercials, and these anything-but-commercial New York Hip Hop veterans that are finally playing the game.

HipHopDX: Can you give us a little about your history?

Well, I was born and raised in the Bronx. I met Shabeeno, his aunt used
to live in my building, God bless her, Aunt Pat, and the rest is
history. I was fucking with Guru and [DJ Premier] for a minute, they lived
in the hood too. Guru and Preme was telling me that my style was
official they loved my style, they was like, “Yo, you should rap.” I was
like, “You think so?” So probably like around ’94 I took them serious and I wrote a few rhymes, and I knew that Shabeeno was still rapping, so I
put him down with me. We was calling ourselves the NYG’z on the street,
but I didn’t think we could use the name because of the New York Giants
football team. So then we changed the name a few times, then we was
like fuck it we just gonna be the NYG’z, we gonna try to keep this
name, and that’s what we did.

Shabeeno: I been rapping
forever. Panc called me one day like, Guru and ’em gonna put me on, and I’ma bring you with me. We was Operation Ratification back then; that was
a name Panch made up. I rolled with it. I hated the name though. We was
always NYG’z, you know we was saying New York and giants in our rhymes,
So was was really New York Giants, but we cut it down to NYG’z.

DX: How was it growing up in the Bronx?

It was official growing up in the Bronx. We grew up with Hip Hop,
Hip Hop wasn’t raising us. I remember at night time when rap music used
to go off at night, they used to play House, and Disco, and Encore. So
we used to have to tape Mr.Magic, Red Alert and all that, and listen
to that all night. It was official, I had a beautiful childhood.

DX: Who or what are some of your influences?

As far as music is concerned, Sha was a big influence for me ’cause I
actually sat down with him and did music with him, and that was
influential to me. Other rappers that I grew up listening to wasn’t
really an influence on me, because I wasn’t really rapping, I wasn’t
into rap like that.

S:
Everybody that was doing it everybody that made moves. Of course
Run-DMC, I was a little nigga watching them like, “I can do that,” and then
it got bigger. LL, Rakim, Big, Hov: the best to ever do it. That’s ’cause I ain’t get a shot yet, give me a minute.

DX: For those who haven’t heard it yet, What should we expect with the Welcome to G-Dom album?

Real street music. No gimmicks, no finger snapping, none of that.
Straight corner music. The single off of Welcome to G-Dom, “Your Days Are Numbered,” is in heavy rotation right now. BET been showing us love
for like the past three weeks.

DX: Can New York take back its throne, being that it is the mecca for Hip-Hop?

Every time I answer that question, I say the same thing, “New York ain’t
never really lost it’s throne.” You gotta remember, we got Puffy, he been
around forever rocking since ’93. We got Hov, he been rocking heavy
hard, then 50 came right behind him and was rocking heavy, and we
always had Nas. Hip Hop always been doing it in New York, but cats is
making music, that you couldn’t believe a New York nigga made it. It’s
just back in the day if you hear a song you’d be like oh this New York,
nowadays you don’t know where its from.

DX: Whats your favorite Hip-Hop album of all time?

My favorite Hip Hop album is The Good The Bad and The Ugly by Mob
Style. We have a picture of it to, inside the sleeve to Welcome to
G-Dom. Those dudes were like me, we were all from the streets, and I
couldn’t believe that they was rhyming, and then it was dope!

S:
I dint really have one favorite album. I gotta say Brand Nubian, All
for One.

DX: How do you feel about the New York and the Boston game coming up?

It’s gonna be crazy, actually I was at the last game of the season when
New England made history, I was in the stands. I wasn’t routing for
either one though. I’m a Cowboy [fan] in my heart. I loved the Cowboys all
my life, ever since I wanted to be Tony Dorsett. The New York
atmosphere right now [is] they loving it! They routing for they Giants. I
can’t really route for them, but I hate to see the Patriots go
undefeated.

DX: A lot of athletes want to be rappers, and alot of rappers want to be athletes. What do you think is the cause behind that?

Coming from the streets after drugs you only got two other dreams, and
that’s sports or music. These athletes, they’re our generation, they doing
what we do, they just got put on. Your man [Allen Iverson], done
music before, even Ron Artest put out a album. You can’t knock em, they
probably been rapping all they life.

P: Hip Hop and football
really go hand in hand. The hard hitting beats, the hard hitting
lyrics, is like a team hitting hard on the field, and when you make a
hit song is like making that winning touchdown. A lot of athletes are
young black men, and they grew up listening to Hip Hop, and alot of
Hip Hoppers grew up playing sports.

DX: Who has the better looking women, between New York and Boston?

See, that ain’t a fair question, ’cause I’ma say Boston, and a Boston dude
will probably say New York. I see New York women everyday, but New York
has more of a pick I think. Every time I go to Boston, I just see black
girls, white girls, and spanish girls. In New York, we got everything.

S:
Hands down, New York got it! I wasn’t in Boston that much, but look how
crowded New York is,we got every nationality here. We got everything,
so you definitely have your pick.

DX: Any specific place you spending Sunday Night at?

Oh yeah, every year we got this little spot up in the Bronx. It’s no
women allowed in there. Our basement is crazy we got about 10 TVs down
there. We got the walls painted, you know I got my wall painted gray
and silver, that Cowboy silver.

DX: So who is your pick for the Super Bowl?

Real talk, I say the Patriots is gonna win. The Giants can really come
up with a upset but they defense gotta be on they A-plus game. The
score I say 31-20 Patriots.

P: There’s a vendetta at the end of the season, were beating everybody that beat us, so I know we can win.