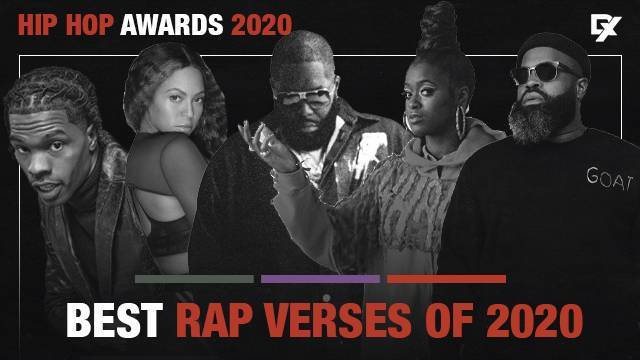 Basically, rap lines mattered the most in one of mankind’s most trying years of the past two centuries.

There was no shortage of inspiration for the best 16s of the year, such as the Black Lives Matter movement, the presidential election, news about rappers being shot, and the coronavirus preventing artists from touring to name a few.

Rappers elicited various streams of consciousness writing over beats and make listeners rewind and repeat their dopest bars. That’s also reflected in the 2021 Grammys Best Rap Album category which nominated several of the genre’s most revered wordsmiths of the past year.

This year’s rap verse of the year is…

Top bars: “Seems like we losing our country/But we gotta stand up for something, so this what it comes to/Every video I see on my conscience/I got power, now I gotta say somethin.'”

COVID-19 and police murders of Black people were the year’s biggest news stories in 2020. Lil Baby’s “The Bigger Picture” is an audible fist in the air rallying for social justice. Released in June shortly after the viral video revealing a white police officer murdering George Floyd on Memorial Day weekend, Lil Baby urges for a revolution over a gliterring piano loop and scintillating trap drums and hi-hats. In his second verse, he talks about his own content as an Atlanta-based street hustler with political awareness. Yet he’s objectively fair to both marchers and police who really want to protect the community. The verse is this year’s most popular male rapper’s paralleling Rodney King asking, “Can’t we all just get along?”

Some of Our Favorite Rap Verses This Year

Killer Mike –  “walking in the snow”

Top bars: “And every day on the evening news, they feed you fear for free/And you so numb, you watch the cops choke out a man like me/Until my voice goes from a shriek to whisper, ‘I can’t breathe.'”

Killer Mike is the voice of reason and remorse on Run The Jewels’ most important track and verse “walking in the snow” from its nearly perfect DX-rated album RTJ4. He embodies his family’s surname to render one of his most inspiring verses of his career. The song’s second verse is a blistering trek through the cold reality of not only Black people in AmeriKKKa, but the short term memory of people who feign their sorrow on social media in reaction to police brutality viral videos. He imitates the disturbing pre-death “I can’t breathe” gurgles of Eric Garner and George Floyd. As the beat switches and hits a crescendo, the review of Black people subjugated to modified forms of slavery via lower education standards that feed into the prison system from the time they are children. As Mike raises the bar on potent triplet rhyme cadence, he reminds us that Jesus was a matryr  “killed by the state” for the love, peace and equality to save humanity.

Top bars: “These hoes can’t rap, they need a permanent pack/I ain’t fuckin’ with you boys, need the cervical cap.”

Tierra Whack represented the legacy of Philadelphia’s top MCs such as Beanie Siegel, Black Thought, Cassidy, Fresh Prince, Meek Mill and Bahamadia on “T.D.” The cleanup at-bat by Whack following the verses Lil Yachty, A$AP Rocky and Tyler, The Creator was luminous and everything but her moniker’s last name suggests. In fact, she was so dope on this verse that she claimed to be “bored” and “tired” of ripping the beat to shreds. She rides the track with seamless bounce and hollow tip bullet-blasted wit to make you rewind for anything you missed the first and second time around.

Top bars: “It’s mad last wishes, gas mask kisses/The thin line between savants and savages/Your life could depend on the laws of averages/The difference between Black and White/Is mad privilege.”

For annual All-Star rap team selections, Black Thought perennially runs the point. His solo single “Thought Vs. Everybody” released in July was his cognitive swoop encompassing what it means to remain as an Übermensch of poetry (“Great men chose the Papermate Pen or State Pen”). One month later when Swizz Beatz released “Good Morning” featuring Thought, Pusha T, and Killer Mike, all three lyricists drew a constellation of cosmic wonder. But Thought was the MC that was hard to trace setting the track off with his introductory verse, commanding the triumphant beat like a war general in the trenches leading the charge for good against evil. Thought’s bars on “Good Morning” is a wake-up call that all rap traditionalists have the use the wide-eyed emoji to define him as one of the best of any generation.

Top bars: “Hips tik tok when I dance/On that Demon Time, she might start an OnlyFans.”

Beyoncé isn’t an elite lyricist. But when she raps, people always tune into what Queen Bey has to say. Especially following her standout performance on the mic with her spouse JAY-Z on their DX classic-rated collaborative album EVERYTHING IS LOVE in 2018. The impact and memorable nature of Beyoncé’s “Savage (Remix)” verse in one of 2020’s biggest songs is what puts it among the year’s best. Sure, she brags about her physical assets and getting endless swag from mother. But it’s palpable for all women to join in on her fun.

Tyler, The Creator – “Something To Rap About”

The former Odd Future leader alley-oop dunks with grace in the second verse over a soothing acoustic blues guitar sample beat lobbed by Freddie Gibbs and The Alchemist to be one of the top guests verses on the year’s best independent rap LP Alfredo.

Jay Elect’s final track on his debut LP A Written Testimony draws from his Muslim faith to overcome the grief his mother passing away and poignantly likens the devastation to his New Orleans origin’s levees from Hurricane Katrina (“My eyelids is like levees but my tear ducts is like glaciers”).

After a brief hiatus in late 2019, J. Cole crept back into the spotlight with his Lewis Street EP released in July, adding to his list of speculated sneak disses on the second verse of the self-produced “The Climb Back” to set social media ablaze.

The Madlib-produced “33” was an final draw staged by the reclusive, mellow-toned Chicago native Noname whose “queen tone” reaction to J. Cole’s “Snow On Tha Bluff,” in which he possibly called her out for criticizing top-selling rappers’ actions in protesting in one of conscious rap’s most contentious male-versus-female discourses of the year.

Roc Marciano – “Sins Of The Father”

The second verse by the self-proclaimed “LeBron James” of underground rap Roc Marciano on his frequent collaborator Ka’s album Descendants Of Cain gleams in his dim portrayal of street life and Hell on earth (“We gave the devil a grace period/The weak is baptized in Lake Superior”).

The title of this track points to the Syracuse, New York roots of the artist formerly known as Aaron Cooks which is awash with obscure references such as Egyptian mythology, sports, and late comedic actor John Candy’s filmography (“Say my name they get to bucking off/Shit backfire like Uncle Buck exhaust”).

Benny The Butcher – “It’s Over”

Griselda Records capo Benny The Butcher always steals the show whenever he’s on a track and he raises the bar higher than a flagpole as one of the best of his highly productive year in closing his Black Soprano Family’s track “It’s Over” featuring Heem and Rick Hyde.

Never sleep on Johnny Blaze who burns his way through Conway The Machine’s track “Lemon” with a kerosene-doused verse that makes listeners from three different generations of rap fans recognize him as one of the best to ever grip the mic (“I think outside the box, then I find a box I can keep ’em in/
Or just leave it then, like the bouncer, won’t let your people in”).

Another entry from Baby Faced Killer and The Alchemist’s Grammy-nominated Best Rap Album of the Year LP Alfredo is the opening track “1985,” pulling from Michael Jordan’s explanation in the popular ESPN documentary series “The Last Dance”  about the GOAT’s sensational NBA rookie season in that same year (“I can smell the ‘caine burnin’/Michael Jordan, 1985, bitch, I travel with the cocaine circus.”)