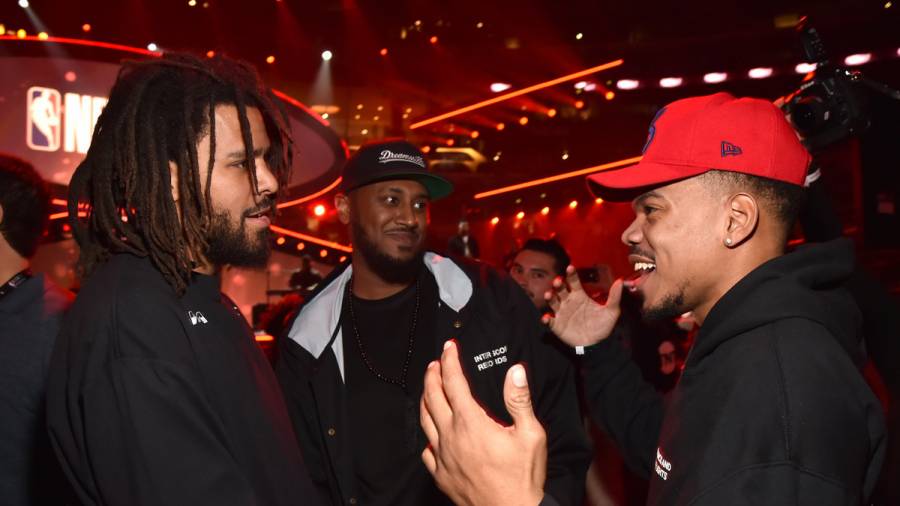 J. Cole fans rejoiced when the Dreamville founder unexpectedly released a new single titled “Snow On Tha Bluff” on Tuesday night (June 16). But the song was met with a swift backlash as many listeners heard Cole’s words and determined he was addressing Chicago’s Noname, who’s been an outspoken critic of how “top-selling rappers” responded to the police killing of George Floyd.

On the song’s lone verse, Cole laments the tone of an unnamed Black woman’s criticism. While Noname isn’t the only person it could possibly be about, most listeners assume it’s her.

“I scrolled through her timeline in these wild times, and I started to read/She mad at these crackers, she mad at these capitalists, mad at these murder police/She mad at my niggas, she mad at our ignorance, she wear her heart on her sleeve/She mad at the celebrities, lowkey I be thinking she talking ’bout me,” Cole raps.

Noname has been identified as the likely subject of Cole’s song over a Twitter post from May 29. As protests spread around the United States following Floyd’s death, she called out a certain group of artists for their silence.

“poor black folks all over the country are putting their bodies on the line in protest for our collective safety and y’all favorite top selling rappers not even willing to put a tweet up,” she wrote. “niggas whole discographies be about black plight and they no where to be found.”

Noname never mentioned any rappers by name, so Cole’s line about “lowkey thinking” she was talking about him is all that connects the dots. Ironically, the Dreamville boss ended up participating in a protest one day after the tweet was posted.

But Cole being taken back by possibly getting called out isn’t what’s outraged so many listeners. His bars on “Snow On Tha Bluff” have faced intense scrutiny for policing a Black woman’s tone. Whether or not his words are directed at Noname is less relevant here. Instead, the issue at hand is how he’s critiquing — not who he’s critiquing.

“Now I ain’t no dummy to think I’m above criticism/So when I see something that’s valid, I listen/But shit, it’s something about the queen tone that’s bothering me,” Cole raps.

Noname acknowledged this line on Tuesday night in a since-deleted tweet.

“Snow On Tha Bluff” suddenly turned Cole into a target for cancellation on Twitter and got him labeled as a misogynistic. The hashtag #jcoleisoverparty even became a trending topic and produced plenty of memes.

Fellow artists such as Chance The Rapper, Earl Sweatshirt and Chika called out Cole over the song too. Chance’s decision to speak out was the most striking considering he’s collaborated with both Cole and Noname, though he admittedly has closer ties to the latter as they both came up in the Chicago scene.

Yet all three worked together on Donnie Trumpet and The Social Experiment’s 2015 song “Warm Enough.”

Cole’s lyrics alone were enough to piss off plenty of people, but the timing of his song’s release made it even worse. The track arrived just a few days after Black Lives Matter activist Oluwatoyin Salau was found dead in Tallahassee, Florida on Saturday (June 13). And while all the police involved in George Floyd’s death were fired and arrested, the officers who shot and killed Breonna Taylor in her home have remained employed with no charges in Louisville, Kentucky.

Those two examples are among the growing concerns about Black women getting lost in the shuffle in the fight against racial injustice. With that in mind, Cole critiquing a Black woman and telling her to “treat people like children” was destined to make people upset.

As the outrage boiled over on social media, Cole felt the need to comment on his polarizing cut on Wednesday morning (June 17). For an MC known for letting his lyrics speak for themselves, it was notable that he wanted to clarify his thoughts.

“Morning. I stand behind every word of the song that dropped last night,” he wrote via Twitter. “Right or wrong I can’t say, but I can say it was honest. Some assume to know who the song is about. That’s fine with me, it’s not my job to tell anybody what to think or feel about the work. I accept all conversation and criticisms. But Let me use this moment to say this.

“Follow @noname. I love and honor her as a leader in these times. She has done and is doing the reading and the listening and the learning on the path that she truly believes is the correct one for our people. Meanwhile a nigga like me just be rapping.”

He added, “I haven’t done a lot of reading and I don’t feel well equipped as a leader in these times. But I do a lot of thinking. And I appreciate her and others like her because they challenge my beliefs and I feel that in these times that’s important. We may not agree with each other but we gotta be gentle with each other.”

#JCole addresses criticism following the release of his surprise single #SnowOnThaBluff. Many thought the track was pointed at artist #NoName. Hit the link in bio to read more! #DXNews

For someone often commended for his honesty, Cole got a harsh reality check this week. He may stand by his words, but it’s evident his sentiments have been unwelcomed by a large portion of his new song’s audience.

Unfortunately, Cole’s self-reflection and inner turmoil regarding how he can help the Black community are an afterthought on “Snow On Tha Bluff.”

Thanks to the direction he took the song, it’s turned into something divisive and drawn battle lines at a time when unity is much needed.

UPDATE: On Thursday (June 18), Noname officially responded to Cole by releasing a single titled “Song 33.” The track’s second verse as well as portions of the third are aimed at Cole.

“I guess the ego hurt now/It’s time to go to work, wow, look at him go/He really ’bout to write about me when the world is in smokes/When it’s people in trees/When George was begging for his mother, saying he couldn’t breathe/You thought to write about me,” she raps.