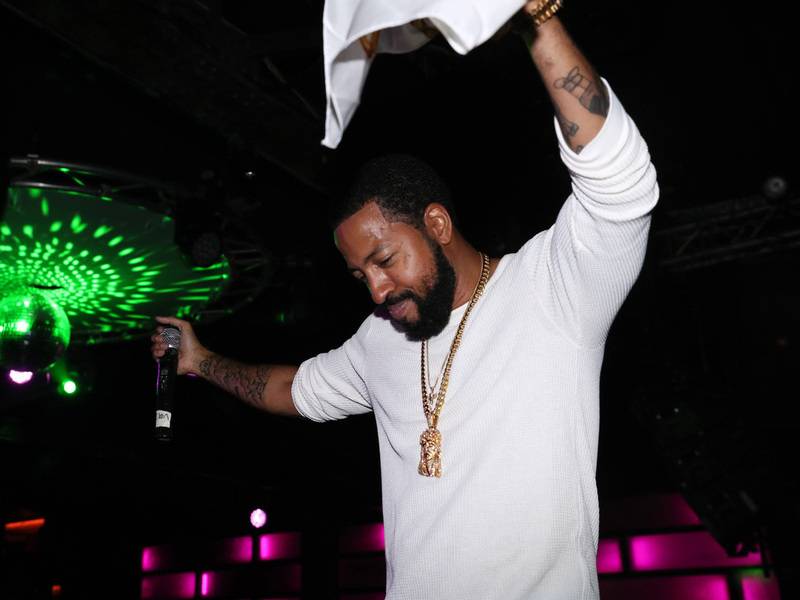 Los Angeles, CA – When the Southern rap snap and trap movements ruled in 2010, Roc Marciano independently and artistically came to New York rap’s proverbial fork in the road to follow either direction for success but went straight. He’s illustrated some of the most vivid macabre on wax in his seminal debut album Marcberg, which celebrated its 10th anniversary on May 4.

The album was a bellwether for the last decade’s crop of hardcore MCs. Westside Gunn and the Griselda camp, Mach Hommy, Mavi, Medhane, Outdoorsmen cohorts Action Bronson and Mayhem Lauren all employ similar content in their packaged art and music like Roc’s Marci Enterprises imprint.

We spoke to Roc Marciano about his early career intersection with Public Enemy’s Bomb Squad and Mobb Deep, finding reflections of his creative process in New York’s rising star Stove God Cook$, and being inspired by crime films and wild TV shows.

DX: In your hometown of Hempstead, you’ve got Adelphi University where Chuck D and members of Public Enemy went to school. Did you ever hear Public Enemy’s radio show on Adelphi’s college station WBAU in the early-to-mid 1980s?

Roc Marciano: Absolutely. I grew up listening to those college stations and I recorded my first demo at 510 Studios where Public Enemy was working out of back in the day.

DX: What year was that?

Roc Marciano: I forgot what year it was, but I remember we were working with Kerwin “Sleek” Young, and he was one of the guys down with the Bomb Squad and was brothers around that time. I remember meeting Mobb Deep for the first time they was working on Juvenile Hell. They had a deal and me and my boy was in there and were in there and were like, “Damn, how do you get a deal?” (laughs) Especially being a kid.

DX: Your Marcielago album went deep in your penchant for sports references, especially the NBA. Who is the NBA player that you would equate yourself to?

Roc Marciano: LeBron. (laughs) Bron, like in my 17th season still dominating. That’s what I would liken myself to. Like a good passer, also a facilitator. I don’t just make myself, I get other people involved and I make other people hot, too.

DX: I perceive a lot of parallels between you and him on your respective debut albums Marcberg and Reasonable Drought and the fan’s initial reception of both. Plus, the common denominator is Busta Rhymes who put you both on. How do you view your come-up in the game to compared to Cook$?

Roc Marciano: For one, it starts with the talent. And then it’s the person themselves. Like what material of human being are you dealing with. I saw a lot of myself in him. I knew he was talented. I just wanted to see if he could actually hold a project by himself and he did just that. Prior to us recording (Reasonable Drought), I hadn’t heard much. But from a little bit that I heard, I knew he was definitely interesting enough to do some recording with me. That’s the reason why he didn’t have any features on his album.

DX: Was that basically a similar strategy on Marcberg and some of your early albums? It seem like you or Cook$ wanted people to know you for your lyrics and not really for just coming up off the weight of other people as a rookie.

Roc Marciano: Yeah. And also it turned out that way. It got to the point where as we were wrapping (Reasonable Drought) up, I’m thinking about jumping on a record. I was going to get on a record and he wanted me to get on one. But from what I heard, I was like, “Yo, this project is perfect. It doesn’t need me to rap. I’m not needed to rap on it.” Not to mention, it just feels better to be self-made. I wanted him to have that feeling of saying I steered this full ship on my first project in the booth by myself. Even though Marcberg has a feature from Ka, but at the time nobody knew who Ka was. So, it was just like a friend of mine getting on a song. It wasn’t like Ka’s feature was going to help the project sell or anything like that. I just think that just happened organically. As we were finishing up (Reasonable Drought), I just started to realize, you know what, we don’t need anybody on this. And honestly, I didn’t want anybody else on it because I felt like he thoroughly entertained through the whole project.

DX: In reference to the LeBron metaphor, it’s the second act of your career right now, like what Mike Krzyzewski said about him during the 2012 Olympics. What do you plan for the future in this new decade, in terms of production and release out more projects?

Roc Marciano: Well, the future is what I’m doing right now. I’m working with brothers like Cook$. Expect more from us working together. Right now I’m just building up the company and bringing some more people in that I just feel like I want to shed some light to catch that people haven’t heard. Because I feel like that’s a part of producing that’s been lost. Like everybody makes beats is looking for everybody who is known to jump on their beats versus creating masterpieces with unknown people. So I’m definitely loving that challenge and I’m going to be doing a lot more producing for a lot of other people in the business as well.

DX: In this COVID-19 pandemic. What do you draw inspiration from during this time when you’re pretty much at home like most of the world in quarantine?

Roc Marciano: The beats. I will say the beats more than anything. The beats give me enough inspiration. I’ve done a lot of living, so I’ve done a lot of things in my life. I’m not looking for new experiences to write about. I’ve definitely had an eventful life. So really it’s just the music. As long as I’ve got the music that is speaking to my spirit, it just makes my job easier.

DX: I read in a Complex interview that you want to score films. Your album intros or any of their interludes, it seems like a full screenplay rather than an album. Also, a lot of the content from your rhymes reminds me of Omar Navarro’s character and his Mexican drug cartel in the Netflix show Ozark. Do you watch films and TV shows and say, I would have used this beat or that beat for that scene? Do you ever come across situations like that when you watch shows?

Roc Marciano: Yeah, I definitely do. I think about that all the time, actually. I think about where my records would fit or how beats would fit in certain parts of films. But even my music, I kind of liken my approach to making music, even when I’m listening to samples and beats, it’s kind of like a visual thing. When I hear the music, I’m thinking like, it’s almost like a movie score. Like when I hear the music that I want to rap to, I’m thinking nine times out of 10, this is how it sounds when I appear in the movie.

DX: What are some of the films or TV shows that you watch the most?

Roc Marciano: I watch a lot of wildlife documentaries. I can just watch tigers and lions hunt all day while I’m creating music. I go watch wild animals hunting. Bobcats, all kinds of wildlife stuff. Besides that movies, I go back into the nineties and watch a lot of the old classics that I grew up watching. A lot of the classics mainly. That’s basically what I watch. When I’m sitting here writing I might watch King of New York. I might watch The Godfather. Something I can watch and pay attention to, just looking at it and know what is going on.

DX: Do you ever watch Tiger King?

DX: What do you think about it?

Roc Marciano: That shit was wild, man. I heard Nicholas Cage is playing (Joe Exotic in the Tiger King movie), too. That’s a perfect choice, too. As zany as Nicolas Cage is, that’ll work. Yeah, I watched Tiger King. Hell yeah!

DX: It’s crazy. So, what type of beats would you use in the upcoming Tiger King movie?

Roc Marciano: (Laughs) Wow. Definitely some wild, crystal meth beats. That’s what I would be thinking.