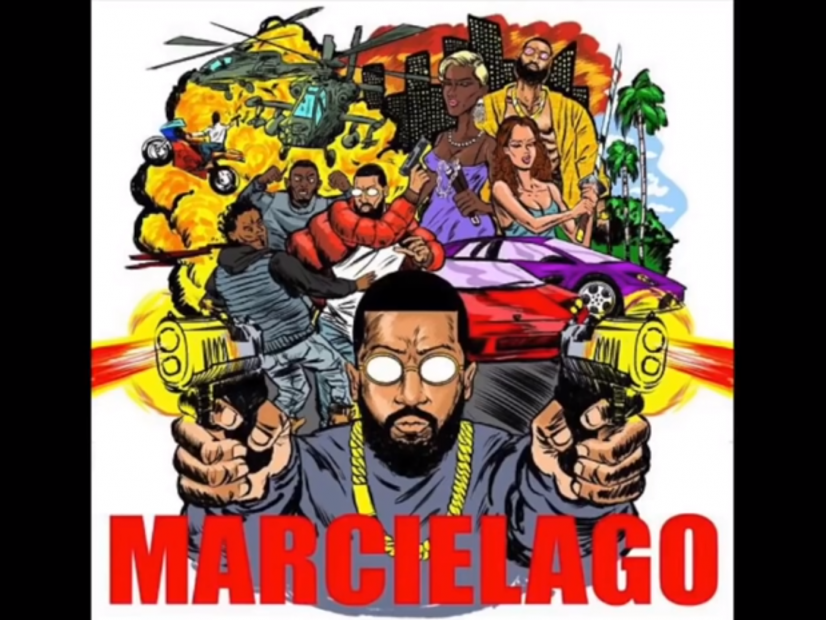 Throughout the eight albums he’s released since his 2010 debut Marcberg, Roc Marciano has never wavered from spray painting his haunting observations of color-coded violence on dark tapestries.

Roc keeps a flashing neon sign outside his open door and daring listeners to enter his polar vortex on his latest project Marcielago.

Its title is an apropos combination of his name and Lamborghini Murcielago cars that were released during his days of paying dues between 2001 to 2010.

The LP lasts 50 minutes with 15 tracks of dusty soul and jazz loops mostly produced by himself, Animoss and one track by his frequent collaborator The Alchemist.

Known for his relaxed spoken-word delivery, this may be one of Roc’s most energetic yet and puts him foot down as one of Hip Hop’s most influential underground rap hitmen in the digital age.

It begins the introduction “Select Few,” a snippet of an interview of Roc’s fellow Nassau County rap legend Prodigy of Mobb Deep sharing his disgust for unqualified rappers and upholding Hip Hop basic tenets of competition and striving for quality lyricism. It’s the only moral ground that Roc stands on with caution. (“I got morals but this game is a disloyal bitch,” he quips on the album’s first official song “Molly Ringwald.”)

The album shifts into the drive on the track “Choosin Fees” in which Roc uses his wiseguy code language to spit salacious pimpology bars over the bass-thumping 70s R&B sample.

One example is his venomous allusions to sports injuries and nativity over sauntering drums and spatial guitar strums on “Richard Gear.”

“My aura glisten/I shot the ball with the stick from long distance and went off the grid like I’m ballin’ with a torn meniscus/I still never trip with all this water drippin’/I knocked the game up, it was more then just morning sickness,” he spits.

His collaborative tracks on the album are “Ephesians” featuring Ka, “Tom Chambers” with Knowledge The Pirate, the raucous “Puff Daddy” and “God Loves You” assisted by the loud cat-calls from Cook$, the album’s peak “Boosie Fade” featuring Westside Gunn and “Bomb Shelter” with Willie The Kid,  which are all worthy gems for East Coast gangsta rap enthusiasts.

But the album’s mediocre points are the Alchemist-produced “Saw” with the overplayed throw-in chorus “We ain’t going nowhere” and “Sayvali” making Roc sound too offbeat with the instrumental’s overly experimental texture.

Marcielago also serves as a reflection of his 20-year career and its summation comes on the closing two tracks “Joe Jackson” and “Legacy.” He discusses how he wasn’t embraced at first but stay the course with personal sacrifice and didn’t use features on other legends like his initial stints with legends such as Busta Rhymes and Pete Rock as his calling card.

Hearing the blood-splattered diary readings of Roc Marciano is like encountering an elderly mobster who elicits sobering feelings of fear, respect and wonder of fashioning evil and elegance can be effortlessly balanced.

Marcielago is Roc reminding people of all ages to heed his word and blades of steel.