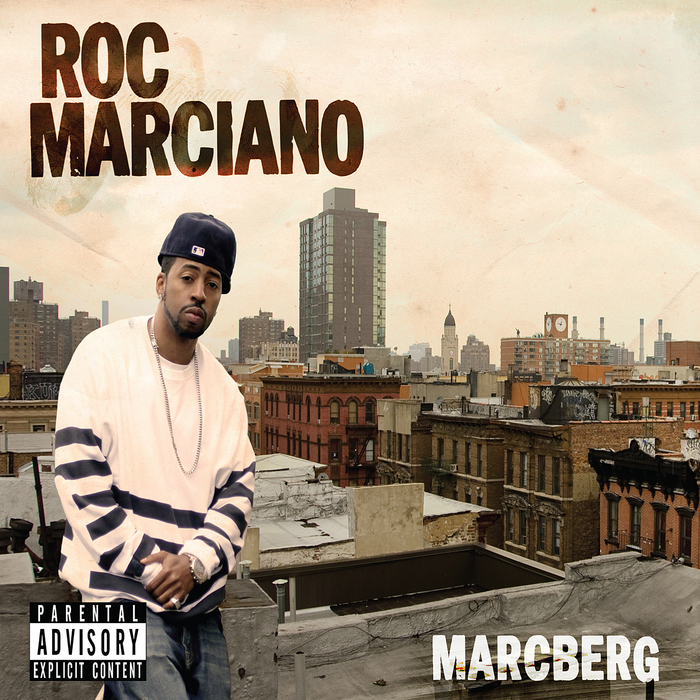 During the 1940s and ‘50s, boxer Rocky Marciano wreaked havoc on any opponent willing to step into the ring, and his record of 43 KOs, six decisions and zero losses showed for it. Much like his boxing namesake, former Flipmode Squad and the U.N. emcee Roc Marciano is a veteran brawler amidst an industry of terry cloth-soft nut-hugger jeans wearing techno rappers. Luckily, for those who haven’t traded in their Timbs and Polo for Supra and Stussy, Roc isn’t pulling any punches on his masterpiece debut Marcberg. Tackling both the raps and the unconventional production, Roc has crafted perhaps one of the most cohesive and most inspired debut Hip Hop albums in the past half a decade.

The Strong Island emcee doesn’t hold back when it comes to his lyrics. Each bar hits the listener with a crushing brute force, sounding like a hybrid of Ultramagnetic MCs-era Kool Keith and Sean Price. His stream of conscious lyricism and complex flows harkens back to the golden era, when emcees brought a certain science to spitting. On the album’s stand-out cut “Snow,” Roc Marcy spits his highly associative bars with calculated precision, saying, “Baby girl, my .45 don’t jam / Al Pacino with a tan / Ghetto casino, rollin’ cee-lo with Vito for nothing under a c-note / Nigga, we still reppin’ the east coast / Reaching for toast like TV remotes.”  But Roc doesn’t stick to just one lyrical mode. Cuts like “Hide My Tears” find him employing a faster cadence, while “Raw Deal”

and “Whateva Whateva” find him slowing things down and riding his perfectly crafted beats.

Marcberg is one of those albums that to hit the skip button on any single song is pure heresy. Although the album is entirely grounded in the streets, none of its 15 cuts feel repetitive or unnecessary; rather, each fits perfectly into the larger whole of the album. From spitting about the “white man’s aspirin” on cuts like “Jungle Fever” to more violent and paranoid fare like “Panic” and “Pop,” Marciano keeps it gutter with a capital G. He even delves into more reflective territory on the remorseful track “Thug’s Prayer.” Other notable songs include the blunt cruise-ready “Ridin’ Around” and the atmospheric title track, which features Roc spitting the final verse from the back of a squad car. The only real snag in the album is the final cut “Hide My Tears,” which suffers only slightly from Roc’s off-beat-yet expertly crafted second verse.

As dope as Roc Marcy is on the mic, he is twice as proficient on the boards. Roc had exhibited immense production talent with cuts like “Get Yo Shit” and “Mind Blowin’” from the U.N.’s UN Or U Out, but he manages to step up his MPC game even further on Marcberg. Cuts like “Snow,” “Ridin’ Around” and “Don Shit” are mind sonic masterpieces schooled in the arts of Large Professor and Pete Rock. Other cuts like “Jungle Fever” and “Thug’s Prayer” find Marciano letting the sample do the dirty work, allowing him the leeway to bring the bars. His atmospheric production, although varied in sound and sample, anchors the album in a golden era sound, perfectly complementing his gritty street tales.

In an industry full of copycats and kittens, Roc Marciano is poised to become the undisputed champ. Marcberg is a hard-hitting, unremorseful classic based on the same code of ethics that made the golden era so immaculate. Forget Little Mac; Roc Marciano is the one wearing the title belt.