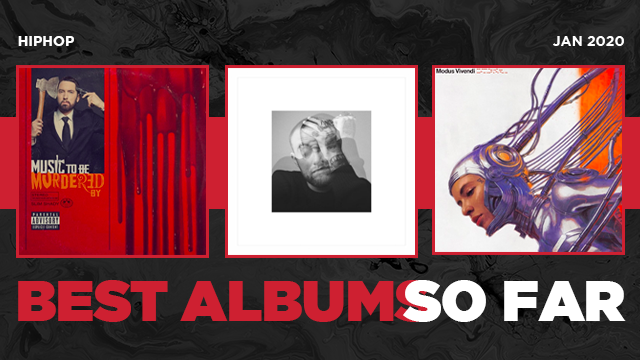 It’s often difficult to keep up with everything dropping over the course of the year. Countless new albums flood streaming services every week, making it easy to be overwhelmed. With so much music coming out, it gets hard to remember what the essential projects were from each month.

Whether you’re looking back at the year and wanting to know what month your favorite album dropped, or wanting to see which month in 2020 had the best Hip Hop projects, this article has you covered.

This is a list with some of DX’s favorite Hip Hop albums of January 2020.

We also update our picks monthly on our Best Hip Hop Albums Of The Year So Far list.

Music To Be Murdered By – Eminem Slim Shady’s Music To Be Murdered By — much like all of his recent albums — is another polarizing effort as his hyperawareness of the criticism has turned into a regular trope. Despite its flaws, Eminem’s latest LP displays incredible wordplay and once again gives fans of the art of rapping some new rhymes and patterns to marvel at. The album received a score of 3.8 out of 5 from DX, with contributor Scott Glaysher writing, Eminem “keeps his dazzling lyrical tirades on point with a plethora of verses that are damn near impossible to discredit.”

KXNG Crooked has always been an elite lyricist, but his discography has been missing a clear cut album that stands above the rest as essential. That changed when the respected MC teamed up with Wu-Tang Clan-affiliated producer Bronze Nazareth, who orchestrated Crook’s best work to date on Gravitas.The album received a score of 3.7 out of 5 from DX with contributor Josh Svetz writing, Crook “gets personal, bringing it back to the Golden Era sound with some ill flow and respectable rhymes, supported by a sizable list of old school legends and new school MCs keeping the classic sound alive.” J. Cole rounded up his loyal Dreamville lyricists for another installment of Revenge Of The Dreamers last year, which found Lute, EarthGang, J.I.D and the rest of the crew firing on all cylinders. This month, the label returned with a director’s cut of the project featuring 12 new bonus tracks with the usual players delivering nothing but heat. While it isn’t a rap album per se, Stretch and Bobbito still made sure to pay homage to the building blocks of Hip Hop throughout their first album. From samples of Nas’ “N.Y. State Of Mind” and Souls of Mischief’s “93 til Infinity” to jazz-infused Latin rhythms and timeless soul, the 10-track project has a little bit of something for everyone.

Calling 070 Shake‘s album rap or R&B would be placing it into a box that it doesn’t fit, but this album definitely deserves a slot on any “Best Of The Year So Far” list. The album is genre-bending, unique and includes more than a hand-full of standout songs. Moneybagg Yo continues to show promise as an artist to watch (no pun intended on the album cover). The album received a score of 3.7 out of 5 from DX with contributor Riley Wallace writing, “The 15-song effort is (if nothing else) a testament to the formula that Memphis native has seemingly perfected.”

This list will continue to be updated monthly with our favorite albums. Check back at the end of each month.