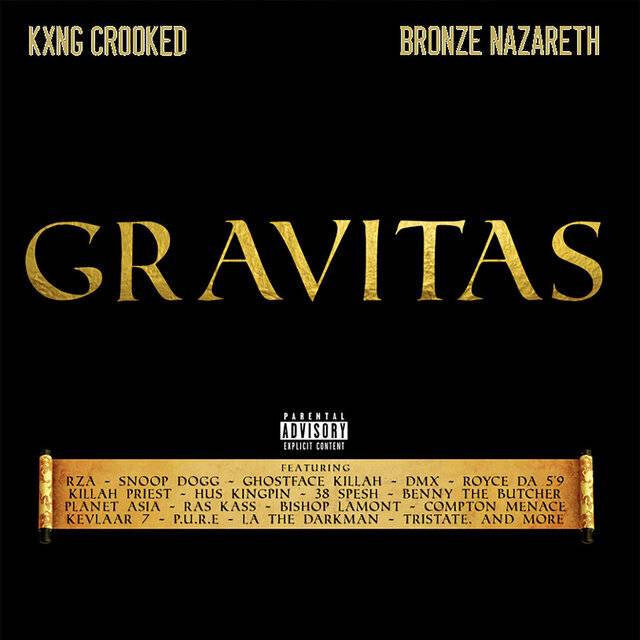 Lately former Slaughterhouse member KXNG Crooked has been focusing on several other ventures outside of rapping. Throughout 2019, the West Coast wordsmith showed off his versatility, writing for Hulu’s Wu-Tang: An American Saga and served as the host of HipHopDX’s Crook’s Corner. However, even with various responsibilities, he still found time to practice the art form that brought him to this point.

A love of rap is what births his latest endeavor Gravitas, featuring production from Wu-Tang Clan affiliate Bronze Nazareth. Across 14 tracks, Crooked gets personal bringing it back to the Golden Era sound with some ill flow and respectable rhymes, supported by a sizable list of old school legends and new school MCs keeping the classic sound alive. The album opens strong with the Hus Kingpin and Killah Priest supported “Outer Limits,” backed by warped production and a hook full of rhythmic wordplay.

“It’s not an image/ It’s not a bunch of gimmicks/ I truly stretched the game to its outer limits/ pillage the village with the illest lyrics to make your brain hemorrhage.”

He keeps up the momentum on “From Slave Chains To Handcuffs” charged with bars about the economic disadvantages of black Americans and the prejudice practices of law enforcement. Crook, Ras Kass, Bishop Lamont, and Compton Menace drop wisdom-packed verses, with Kass igniting the fire, vividly detailing the relation between racism in the modern-day prison system and the original white sin of slavery.

The album hits its stride when it serves more as a retrospective to Crooked’s impressive longevity. The cheery sentiment and soulful production of the Bronze Nazareth and Kevlaar 7-assisted (RIP) “Change Ur Beliefs,” offers some welcome introspection. Backed by a beautiful sample of William Bell and Mavis Staples’ “Strung Out,” Crook interpolates Biggie’s come up classic “Juicy,” reminiscing about his journey in the rap game: “It was all a dream/ I used to read XXL magazine/ Then I landed on the cover in baggy jeans.”

Some of the interludes provide fascinating windows into Crooked’s special brushes with icons as a young MC, such as the one-on-one between him and Snoop Dogg on “Precious Moments,” detailing a chance walk in on Snoop and Tupac in the studio.

Despite plenty of quality cuts to grab onto, not everything lands on this project. “I Can Still Remember…” has plenty of energy and a thoughtful sentiment, with Crooked reflecting on a dead friend and growing up in the hood, but the production sounds out of sync with the drums, distracting and overdone. The record also loses focus with the immense number of guests Crook tries to shoehorn in, especially when they aren’t performing to their capabilities.

One example surfaces on “Kxng Shxt (Remix),” a track featuring big names like DMX, Royce Da 5’9, and Statik Selektah sounding uninspired and scattered on the soulful beat. The remixes continue to feel like an unnecessary addition on “Fresh From The Morgue (Remix),” where the usually untouchable RZA drops by for a forgettable verse.

Though one collaboration does live up to its lofty guests, the engrossing posse cut “Buck Shots (Remix).” Ghostface Killah opens the track with some menacing bars followed by a master class trade-off between Benny The Butcher and 38 Spesh. Crook finishes the festivities sticking the landing with some of his best flow of the project.