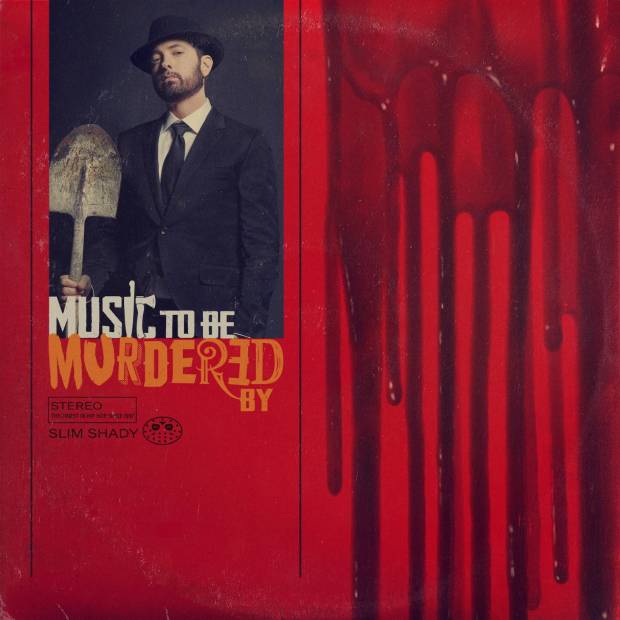 For Eminem, the first half of this past decade started much better than it finished.

2010’s Recovery was regarded as one of Marshall’s best project in years, not to mention being the vehicle that brought him his most commercially successful single to date, “Love The Way You Lie.” From there though, Em’s social standing in the court of public opinion started to slowly decline. The slander from fans and critics alike became so bad that Em was forced to drop his own version of a Kamikaze in 2018; a full-on diss album geared towards the world at large.

A few public rap beefs later and Em, clearly channeling his Slim Shady alter-ego, now has a brand new surprise album that triples down on the murderous tendencies he’s been boasting for his entire career. Music To be Murdered By dropped out of nowhere, similar to Kamikaze, but unlike the aforementioned album, this new project is even darker and clearly calculated.

If Kamikaze was the crime of passion in retaliation to the onslaught of criticism Marshall faced since 2013 then Music To be Murdered By is the premeditated homicide being willfully carried out on anyone left that denies his GOAT status.

For starters, the album begins with a woman being stabbed to death and then subsequently buried as Em sets the record straight on his past few panned projects. On “Premonition – Intro” he raps, “They said my last album I sounded bitter/No, I sound like a spitter/Who 90 percent of/These hypocrites are tryna get rid of/But why would I get a chip on my shoulder?/I was considered, one time, as the illest.”

It’s just one of many times Em declares his dominance in the culture he feels turned their back on him for trendier acts.

Ironically enough though, Em should get props for (almost) leaving behind his prehistoric formula of verse-female-R&B-chorus-verse-female-R&B-chorus records, which was arguably the biggest crux to his musical arsenal. Instead of loading the emotional songs with basic choruses from the likes of Alicia Keys and P!nk, he employs a slick verse from Young M.A on “Unaccommodating,” a verse and chorus from Anderson .Paak on “Lock It Up” and an infectiously catchy chorus from the late Juice Wrld on “Godzilla.”

He also keeps his dazzling lyrical tirades on point with a plethora of verses that are damn near impossible to discredit. On “You Gon Learn,” he dishes bars such as “Do not let me catch you slippin’/I will pop up and I’ll take a spot from you/I’ll get to doing what a leaky faucet do/But I ain’t talkin’ drip when I say that I’ll get the drop on you” and tactically addresses MGK with lines on “Marsh” like “I could keep beefing/Fuck is the point?/I could make it really difficult for motherfuckers to come to Detroit/If you’re still looking for smoke, I already gave you an L/I’d rather just see you in hell but I should get Puff on the joint.”

It also wouldn’t be a classic Eminem project without a healthy dose of controversy which this album has plenty of – especially on talk-of-Twitter track “Darkness.” With the same emotive pen he wrote “Stan” with, Em pens a track speaking from the perspective of Stephen Paddock — the infamous 2017 Las Vegas shooter. The song hauntingly recites the thought process the shooter went through before and during what is now deemed the deadliest shooting in U.S. history.

While this track is utterly disturbing and hard to listen to, Em’s attempt at the concept is notably imposing and an angle he obviously felt compelled to tackle on such a dark album. Aside from stepping into the mind of a mass murderer and putting it on wax, on “Unaccommodating” Em controversially raps “But I’m contemplating yelling bombs away on the game/Like I’m outside of an Ariana Grande concert waiting,” which has been under serious criticism from the internet (obviously) and the mayor of Manchester where the bombing took place.

Although these are some redeemable musical moves for Em in 2020, he still couldn’t resist throwing Skyler Grey and Ed Sheeran on their own respective songs, which are rendered skippable snoozefests.

He also fell back into the bad habit of placing far too many songs on the final tracklist of this album. Twenty songs is simply too heavy for any artist to throw on an album, let alone an artist that raps incredibly dense material at rapid-fire speed. Along with the two aforementioned radio reaches, there are filler cuts like the poorly Serani-sampled “Farewell” and Don Toliver-assisted “No Regrets” – a forcefully remorseful track that Eminem has been making for years.

Marshall Mathers is starting 2020 exactly opposite to how he started 2010. Music To Be Murdered By is far from the star-studded, commercially sustainable album Recovery was, but that isn’t necessarily a bad thing. On this album, despite its handful of flaws, Em shows strong signs of adapting to the times through modern musical choices and smarter songwriting.

If he can keep making these minor melodic updates while keeping the tongue-twisting rhyme schemes and controversial themes, the real Slim Shady might actually stand back up this decade.