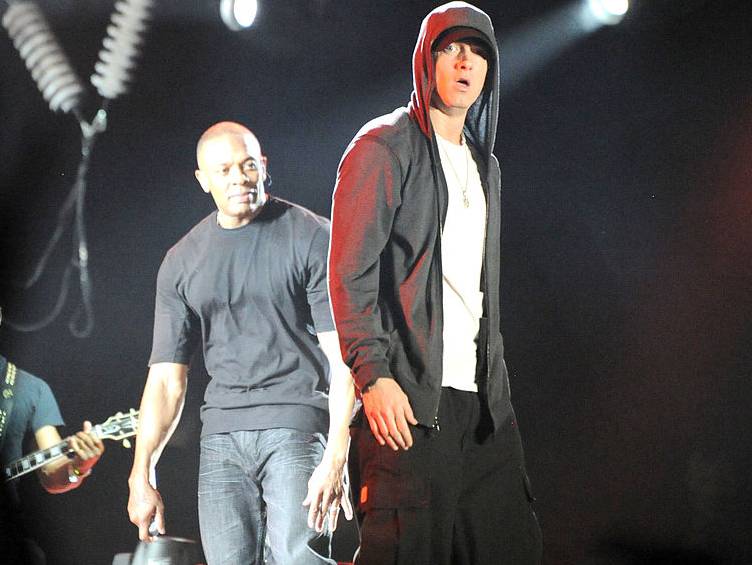 Eminem has become the master of surprise. He dropped Music to Be Murdered By without warning on Friday (January 17), his 11th album overall and first since 2018’s Kamikaze. This is by no means a comeback, as Marshall Mathers dropped four albums, one compilation and a slew of features in the past decade.

Though his 2010s were spotty, Shady still recorded a number of undeniable gems. Take a ride down Dresden Street as we revisit the Top 10 Eminem Songs of the 2010s.

Eminem has always had a way of mining hits out of darkness. He’s far from the first artist to turn the topic of an extremely unhealthy relationship into a pop jingle, but that he was able to turn such startling lyrics about a toxic romance into radio bait highlights the draw the masses have to Marshall Mathers. Of course, it didn’t hurt that Rihanna was belting out beautifully anguished vocals on the hook.

Marshall Mathers used to be the type of kid that would always think the sky was falling. Eminem knows better. So naturally, he has some advice to give to troubled youths. He gives a front-porch view of his life as a teen, absorbed in comic books, afraid of the world, before realizing his prodigious gift with a pen and turning his life around. After all the accolades, all the controversy, what Em is most proud of is his ability to inspire the kids that can see themselves in his story.

Eminem got his T.I. on by making the last two songs of his ninth album the most impactful. “Castle,” the penultimate cut, functions as three letters to his daughter Hailie.

As he laments the toll his fame as taken on her, he declares fatigue and the track rolls into “Arose,” which finds Marshall imagining his farewells had he died after his 2007 overdose. “With every second, each closer to death,” he apologizes to the late Proof and says goodbye to his daughters to heart-wrenching effect.

When he boomerangs back and the heart monitor starts beeping, it’s a moment of emotional triumph. The song then brilliantly circles back to “Castle,” where he redirects his future to multi-platinum success and, more importantly, recovery.

“It’s too late to start over,” Eminem declares at the outset of the accompaniment to The Equalizer. “This is the only thing I, thing I know.” Thematic comparisons to the Denzel Washington film aside, this was an accurate snapshot of Marshall Mathers in 2014. He was in full reflective mode, looking back on the early days of his career, and the courage it took to plunge forth in the face of criticism. Though he had tread on this topic before, his self-awareness keeps the song fresh as he taps into one of his most marketable aspects: his relatability.

Eminem and B.o.B is an unlikely collaboration, but the cut works because the two rappers embrace their differences. The then-upstart Bobby Ray keeps his head in the clouds as he imagines better days. Marshall, the battle-tested veteran, holds no such pretense. He takes B.o.B’s spacey concept and flips it on its ear, trashing daydreaming in favor of hard work and guts. Eminem’s steadfast approach clearly won the song and outlined a mindset that led to a legendary career.

Several notable MCs from the 313 put their mics up and followed Eminem on this Motown free-for-all. Every rapper brings their “A” game, and Shady in particular nimbly pays tribute to the “D” for making him the “angry, bitter blonde.” This track is valuable for its staying power at Detroit Pistons games and its “(Insert city here) vs. Everybody” t-shirts, but the real draw remains one of the best posse cuts of the 2010s.

If Alcoholics Anonymous took the form of a song, it would be the lead single to Eminem’s reflective seventh album. The same guy who used to fire off drug-fueled ravings about causing mayhem was soberly facing his demons, manning up and holding his ground over an inspiring Boi-1da beat. Shady would eventually revert to his trademarked shock rap, but for one shining moment, Marshall Mathers stepped up to the podium a new man.

The opening keys of “Rap God” still bring a jolt of excitement for the lyrical wizardry to come. Though Eminem’s hyper-lyrical schtick would grow tiresome in subsequent years, here he’s electric, shapeshifting from flow to flow like a Transformer. He’s clearly having a blast on his Pharoahe Monch grind, spitting at breakneck speed and daring the listener to keep up. He touches on everything and everyone from Thor to Heavy D and the Boyz, leading to an unpredictability that’s as engaging as his supercalifragilistic flow.

The Marshall Mathers LP 2 worked because it was not a forced attempt to recapture the magic of Eminem’s 2000 masterpiece, The Marshall Mathers LP. Rather, Em revisited topics from the original LP from a more mature perspective. This approach yielded “Headlights,” Marshall’s heartfelt apology to his mother. The song gut-wrenchingly paints a portrait of two broken, abandoned people, doing their best to make it in a cold world, surviving both because of and in spite of each other.

Though Eminem spent the first half of his career hurling vicious insults at Debbie Mathers, here he is full of genuine regret and compassion toward her. Nate Ruess’ impassioned singing, the enriched piano keys, and slow, deliberate drums accentuate Marshall’s sincerity. Though Eminem has often drawn from his anger for inspiration, “Headlights” proves that his humanity is his greatest artistic strength.